1
a
: a word or phrase that constitutes the distinctive designation of a person or thing
The boy's name is Brad.
b
: a word or symbol used in logic to designate an entity
2
: a descriptive often disparaging epithet
called him names
3
a
: reputation
gave the town a bad name
b
: an illustrious record : fame
made a name for himself in golf
c
: a person or thing with a reputation
one of the most detested names in history
4
: family, clan
was a disgrace to his name
5
: appearance as opposed to reality
a friend in name only
6
: one referred to by a name
praise his holy name

1
: to give a name to : call
2
a
: to mention or identify by name
refused to name a suspect
b
: to accuse by name
3
: to nominate for office : appoint
4
: to decide on : choose
name the day of the wedding
5
: to mention explicitly : specify
unwilling to name a price
namer noun

1
: of, relating to, or bearing a name
name tags
2
: appearing in the name of a literary or theatrical production
3
a
: having an established reputation
b
: featuring celebrities
Phrases
in the name of
1
: by authority of
open in the name of the law
2
: for the reason of : using the excuse of
called for reforms in the name of progress

Noun Please write your name on this line. State your name and occupation. I refused to give them my name. Mark Twain's real name was Samuel Clemens. She registered at the hotel under a false name. My full name is Susan Elaine Smith. We had to memorize the names of all the countries in Africa. “What's your dog's name?” “His name is Sandy.” This is his song “Loving You” from the album of the same name. The ship's name was “Titanic.” Verb “What are you going to name your new dog?” “I think I'll name him Sandy.” The aptly named HMS “Victorious” helped the British Royal Navy win an important victory. A man named James Smith is on the phone. We named our daughter “Mary” in honor of her grandmother. Can you name the person who attacked you? All of the authors named above were influenced by his work. She was named to replace him as the company's vice president. Adjective the university's physics department boasts a number of name physicists See More
Recent Examples on the Web
Noun
The name may be a bit confusing, but there's no mixing up whether or not the audio quality is great.

Louryn Strampe, WIRED, 25 Nov. 2022 There’s freedom in the fact that his name is Sammy Fabelman.

Taylor Pettaway, San Antonio Express-News, 22 Nov. 2022 Nemat’s own worries about being on the police's radar were confirmed when her chemistry teacher told her that her name was on a list in the principal’s office.

Wendy Kaur, ELLE, 21 Nov. 2022 But over the past couple years, the performer, whose real name is Breanna Yde, has been launching full-force into musicianship.

Robert Kidd, Forbes, 10 Nov. 2022 By retiring, Walters has ensured Brown will name a replacement who is likely to be aligned with Walters’ jurisprudence.

From Usa Today Network And Wire Reports, USA TODAY, 20 Oct. 2022 The congress will name a Standing Committee, the ruling inner circle of power.

oregonlive, 10 Oct. 2022 Congratulations to anyone who can name every pitcher the Cubs trotted out to the mound this year.

Arpan Lobo, Detroit Free Press, 30 Sep. 2022
Adjective
Although pancake mix and syrup are not sold out in most stores, most popular or name brand items are harder to come by.

These example sentences are selected automatically from various online news sources to reflect current usage of the word 'name.' Views expressed in the examples do not represent the opinion of Merriam-Webster or its editors. Send us feedback. 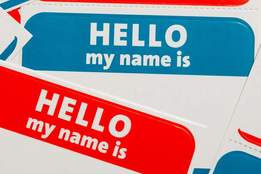 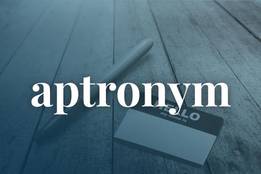 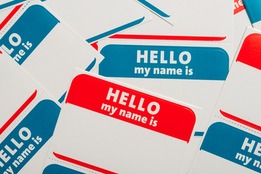 1
: a word or combination of words by which a person or thing is regularly known
2
: a descriptive often insulting word or phrase
called him names
3
: reputation sense 2
made a name for herself
4
: appearance as opposed to fact
a friend in name only

2 of 3 verb
named; naming
1
: to give a name to : call
2
a
: to mention or identify by name
b
: to accuse by name
name the culprit
3
: to nominate for office : appoint
named the diplomat Secretary of State
4
: to decide upon : choose
name the date for a wedding
5
: to mention specifically
name a price
namer noun

More from Merriam-Webster on name