; giving
Synonyms of give

1
: to make a present of
give a doll to a child
2
a
: to grant or bestow by formal action
the law gives citizens the right to vote
b
: to accord or yield to another
gave him her confidence
3
a
: to put into the possession of another for his or her use
gave me his phone number
b(1)
: to administer as a sacrament
(2)
: to administer as a medicine
c
: to commit to another as a trust or responsibility and usually for an expressed reason
d
: to transfer from one's authority or custody
the sheriff gave the prisoner to the warden
e
: to execute and deliver
all employees must give bond
f
: to convey to another
give them my regards
4
a
: to offer to the action of another : proffer
gave her his hand
b
dated, of a woman : to yield (oneself) to a man in sexual intercourse
5
a
: to present in public performance
give a concert
b
: to present to view or observation
gave the signal to start
6
: to provide by way of entertainment
give a party
7
: to propose as a toast
8
a
: to designate as a share or portion : allot
all the earth to thee and to thy race I give—

John Milton
b
: to make assignment of (a name)
c
: to set forth as an actual or hypothetical datum
give the dimensions of the room
d
: to attribute in thought or utterance : ascribe
gave the credit to you
9
a
: to yield as a product, consequence, or effect : produce
cows give milk
84 divided by 12 gives 7
b
: to bring forth : bear
10
a
: to yield possession of by way of exchange : pay
b
: to dispose of for a price : sell
11
a
: to deliver by some bodily action
gave him a push
b
: to carry out (a movement, facial expression, etc.)
gave a cynical smile
c
: to inflict as punishment
d
: to award by formal verdict
judgment was given against the plaintiff
12
: to offer for consideration, acceptance, or use
gives no reason for his absence
13
a
: to suffer the loss of : sacrifice
gallantly gave his life for his country
b
: to offer as appropriate or due especially to something higher or more worthy
gave his spirit to God
c
: to apply freely or fully : devote
gave themselves to their work
d
: to offer as a pledge
I give you my word
14
a
: to cause one to have or receive
mountains always gave him pleasure
b
: to cause a person to catch by contagion, infection, or exposure
15
a
: to allow one to have or take
give me time
b
: to lead or attempt to lead —used with an infinitive
you gave me to understand you'd be late
16
: to care to the extent of
didn't give a hoot

1
: to make gifts or presents
gave generously to charities
2
a
: to yield to physical force or strain
b
: to collapse from the application of force or pressure
The canvas chair gave under her weight.
c
: to undergo or submit to change
for the strike to be settled, something has to give
3
: to afford a view or passage : open
the window gives onto the terrace
4
: to enter wholeheartedly into an activity
5
slang : to be happening
wants to know what gives

1
: capacity or tendency to yield to force or strain : flexibility
2
: the ability of a material to bend or stretch
The knitted fabric has a lot of give to it.
Phrases
give birth
: to have a baby
gave birth last Thursday
give birth to
1
: to produce as offspring
gave birth to a son
2
: to be the source of
give chase
: to set off in pursuit
give ground
: to withdraw before superior force : retreat
give of
: to make available : provide generously
freely gave of their time
give or take
: as an estimate accurate within (an amount to be added or subtracted)
weighs 150 pounds, give or take a few pounds
give place to
: to be replaced or succeeded by
optimism gave place to worry
give rise to
: to be the cause or source of : produce
give the gun
: to open the throttle of : speed up
give the lie to
1
: to accuse of falsehood
2
: to show to be false, inaccurate, or invalid
give tongue
of hounds : to begin barking on the scent
give way
1
a
: retreat
b
: to yield the right of way
2
: to yield oneself without restraint or control
3
a
: to yield to or as if to physical stress
The roof gave way under heavy snow.
b
: to yield to entreaty or insistence
After several hours of debate, the opposition finally gave way.
4
: to yield place
Farmland has given way to shopping malls.
5
: to begin to row

Choose the Right Synonym for give

give, present, donate, bestow, confer, afford mean to convey to another as a possession.

give, the general term, is applicable to any passing over of anything by any means.

present carries a note of formality and ceremony.

donate is likely to imply a publicized giving (as to charity).

donate a piano to the orphanage

bestow implies the conveying of something as a gift and may suggest condescension on the part of the giver.

confer implies a gracious giving (as of a favor or honor).

afford implies a giving or bestowing usually as a natural or legitimate consequence of the character of the giver.

the trees afford shade
a development that affords us some hope

Verb She gave him a camera for Christmas. Are you giving this to me or only lending it? She has given money to many worthy causes. They're asking people to give money for a new hospital. Please give to our charity. We already gave at the office. It is better to give than to receive. He gave me the letter. He gave her his coat to hold. He gave me a head start. See More
Recent Examples on the Web
Verb
That will give buyers more chances to haggle once again. —

Chris Isidore, CNN, 19 Jan. 2023 The Slam will also give amateur pickleball players an opportunity to compete in a challenge on March 31 and April 1. —

Simrin Singh, CBS News, 19 Jan. 2023 The scrunchie-like fastenings over the uppers give this pair a distinct texture. —

Gaby Keiderling, Harper's BAZAAR, 19 Jan. 2023 At the elimination, Bananas and Nany give them their wish and send them straight in. —

Sydney Bucksbaum, EW.com, 19 Jan. 2023 When the ground is covered in snow, snowshoes give you the ability to move across the powder without difficulty. —

Déjà Leonard, Popular Mechanics, 19 Jan. 2023 If the person in trouble is your own child, then by all means give rescue breaths as you were trained in your CPR course. —

Meredith Goldstein, BostonGlobe.com, 19 Jan. 2023 This pan will give you an unmatched sear—not just in evenness, but also in the depth of that browning. —

Tiffany Hopkins, Bon Appétit, 19 Jan. 2023
Noun
The Index is based on the principle that tax systems favorable to business give states advantages in attracting new businesses and generating economic and employment growth. —

Alexa Gagosz, BostonGlobe.com, 12 Jan. 2023 Croatia had seemed to run out of rope at the end of the first extra-time period, when Neymar completed a lightning-speed give and go to score, giving Brazil a deserved, if delayed, lead. —

Andrew Das, New York Times, 9 Dec. 2022 And that's essential for scientists trying to get the final word on the give and take of CO2 between the atmosphere and plants and soils that are being hammered by climate impacts. —

Tom Yulsman, Discover Magazine, 9 Dec. 2022 Another consideration hinged on the give and take that’s always a part of public funding: The Brimer financial pipeline, with the first bonds likely to be sold in November 2023, will close off some other revenue streams until the bonds are repaid. —

Dallas News, 8 Apr. 2022 Maera has a predominantly cotton composition featuring polyester and elastane for extra give. —

Dave Birkett, Detroit Free Press, 11 Nov. 2022 And that’s where a lot of the magic happens and there’s a give and take there. —

These example sentences are selected automatically from various online news sources to reflect current usage of the word 'give.' Views expressed in the examples do not represent the opinion of Merriam-Webster or its editors. Send us feedback.

Middle English, of Scandinavian origin; akin to Old Swedish giva to give; akin to Old English giefan, gifan to give, and perhaps to Latin habēre to have, hold

derivative of give entry 1

Articles Related to give 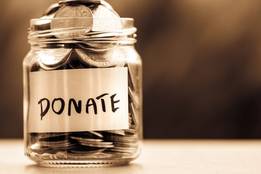 Dictionary Entries Near give

; giving
1
: to make a present of
gave me a book
2
a
: grant entry 1 sense 2, bestow
b
: to make a donation
give blood
we already gave at the office
c
: to grant or yield to another
gave her trust to her friend
3
a
: to put into the possession or keeping of another
give me the letter to mail
b
: to offer to another : proffer
gave his hand to the visitor
c
: pay entry 1 sense 1
wouldn't give a penny for that bike
4
a
: to present in public performance
give a concert
b
: to present to view
gave the signal to start
5
: to provide by way of entertainment
give a party
6
: to point out or set aside as a share or portion
gave their daughter half of their estate
7
: to indicate the source or cause of
gave all the glory to her mother
8
: to form, make, or yield as a product or result
cows give milk
84 divided by 12 gives 7
9
a
: to deliver by some bodily action
gave me a push
b
: to carry out a movement : perform
gave a sudden leap
c
: pronounce sense 1
give judgment
10
: to offer for consideration or acceptance
gives no reason for his absence
11
: to apply fully : devote
gave herself to the cause
12
: to cause to have
gave pleasure to the reader
13
: to yield or collapse under force or pressure
the box gave under his foot
giver noun

2 of 2 noun
1
: tendency to yield to force or strain
2
: the quality or state of being springy

; giving
1
: to administer as a medicine
2
: to cause a person to catch by contagion, infection, or exposure

transitive verb
gave; given; giving
1
a
: to make a gift of
I give the remainder of my estate to my wife
compare convey, sell
b
: to grant or bestow by formal action
the law gives citizens the right to vote
2
a
: to transfer from one's authority or custody
the sheriff gave the prisoner to the warden
b
: to execute and deliver
all officers must give bond
c
: to communicate or impart to another
failed to give adequate notice
d
: to offer or submit for the consideration of another
give testimony in court
3
: to yield possession of by way of exchange
4
a
: to impose as punishment
b
: to award by formal verdict
judgment was given against the plaintiff
giver noun

More from Merriam-Webster on give

Nglish: Translation of give for Spanish Speakers

Britannica English: Translation of give for Arabic Speakers