1 to move back and forth in a rhythmic manner

Synonyms & Near Synonyms for oscillate

2 to continuously change from one belief, feeling, or condition to an opposite one

Synonyms & Near Synonyms for oscillate

How does the verb oscillate differ from other similar words?

Some common synonyms of oscillate are fluctuate, sway, swing, undulate, vibrate, and waver. While all these words mean "to move from one direction to its opposite," oscillate stresses a usually regular alternation of direction.

Where would fluctuate be a reasonable alternative to oscillate?

While the synonyms fluctuate and oscillate are close in meaning, fluctuate suggests constant irregular changes of level, intensity, or value.

When is it sensible to use sway instead of oscillate?

The words sway and oscillate are synonyms, but do differ in nuance. Specifically, sway implies a slow swinging or teetering movement.

trees swaying in the breeze

When is swing a more appropriate choice than oscillate?

The synonyms swing and oscillate are sometimes interchangeable, but swing implies a movement of something attached at one end or one side.

In what contexts can undulate take the place of oscillate?

The meanings of undulate and oscillate largely overlap; however, undulate suggests a gentle wavelike motion.

an undulating sea of grass

When would vibrate be a good substitute for oscillate?

While in some cases nearly identical to oscillate, vibrate suggests the rapid oscillation of an elastic body under stress or impact.

the vibrating strings of a piano

When could waver be used to replace oscillate?

Although the words waver and oscillate have much in common, waver stresses irregular motion suggestive of reeling or tottering.

the exhausted runner wavered before collapsing

The first known use of oscillate was in 1726 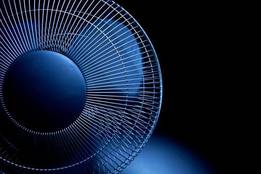 The Difference Between ‘Osculate’ and ‘Oscillate’

Or, watch your tongue when you’re near the fan.

More from Merriam-Webster on oscillate