1a(1) : a written document that may be rolled up : scroll specifically : a document containing an official or formal record the rolls of parliament
(2) : a manuscript book
b : a list of names or related items : catalog
c : an official list the voter rolls : such as
(1) : muster roll
(2) : a list of members of a school or class or of members of a legislative body
2 : something that is rolled up into a cylinder or ball or rounded as if rolled rolls of fat : such as
a : a quantity (as of fabric or paper) rolled up to form a single package
b : a hairstyle in which some or all of the hair is rolled or curled up or under
c : any of various food preparations rolled up for cooking or serving cabbage rolls a sushi roll especially : a small piece of baked yeast dough
d : a cylindrical twist of tobacco
e : a roll of paper on which music for a player piano is recorded in perforations which actuate the keys
f : a flexible case (as of leather) in which articles may be rolled and fastened by straps or clasps jewelry roll
g(1) : paper money folded or rolled into a wad
(2) slang : bankroll
3 : something that performs a rolling action or movement : roller
4 : a wheel for making decorative lines on book covers also : a design impressed by such a tool

1a : to impel forward by causing to turn over and over on a surface
b : to cause to revolve by turning over and over on or as if on an axis
c : to cause to move in a circular manner they rolled their eyes at the absurdity
d : to form into a mass by turning over and over
e : to impel forward with an easy continuous motion
f : to cause to move in a given direction by or as if by turning a crank rolled down the window
2a : to put a wrapping around : enfold, envelop
b : to wrap round on itself : shape into a ball or roll rolled up the newspaper also : to produce by such shaping rolled his own cigarettes
3 : to press, spread, or level with a roller : make smooth, even, or compact hulled and rolled oats roll paint —often used with out rolled out the dough
4a : to move on rollers or wheels rolled the patient into the operating room
b : to cause to begin operating or moving roll the cameras
5a : to sound with a full reverberating tone rolled out the words
b : to make a continuous beating sound upon : sound a roll upon rolled their drums
c : to utter with a trill rolled his r's
d : to play (a chord) in arpeggio style
6 : to combine so as to comprise one entity —usually used in the phrase rolled into one a shopping center, amusement park, and nightclub all rolled into one
7 : to rob (a drunk, sleeping, or unconscious person) usually by going through the pockets broadly : rob
8 : bowl sense 1

1a : to move along a surface by rotation without sliding
b(1) : to turn over and over the children rolled in the grass
(2) : to luxuriate in an abundant supply : wallow fairly rolling in money
2a : to move onward or around as if by completing a revolution : elapse, pass the months roll on
b : to shift the gaze continually eyes rolling in terror
c : to revolve on an axis
3 : to move about : roam, wander
4a : to go forward in an easy, gentle, or undulating manner the waves rolled in
b : to flow in a continuous stream : pour money was rolling in
c : to flow as part of a stream of words or sounds the names roll off your tongue
d : to have an undulating contour rolling prairie
e : to lie extended : stretch
5a : to travel in a vehicle rolling north on the highway
b : to become carried on a stream
c : to move on wheels
6a : to make a deep reverberating sound the thunder rolls
b : trill
7a : to swing from side to side the ship heaved and rolled
b : to walk with a swinging gait : sway
8a : to take the form of a cylinder or ball
b : to respond to rolling in a specified way
9a : to get underway : begin to move or operate
b : to move forward : develop and maintain impetus the project finally got rolling especially : to proceed or progress with notable ease or success the team was rolling
10 : to execute a somersault
11 of a football quarterback : to run toward one flank usually parallel to the line of scrimmage especially before throwing a pass —often used with out
roll the bones
: to shoot craps
roll the dice
: to assume a risk by taking action rolled the dice when they bought those stocks
roll with the punches
1 : to move so as to lessen the impact of blows
2 : to adjust to things as they happen

1a : a sound produced by rapid strokes on a drum
b : a sonorous and often rhythmical flow of speech
c : a heavy reverberatory sound the roll of cannon
2 : a rolling movement or an action or process involving such movement a roll of the dice an airplane's takeoff roll : such as
a : a swaying movement of the body
b : a side-to-side movement (as of a ship or train)
c(1) : a flight maneuver in which a complete revolution about the longitudinal axis of an airplane is made with the horizontal direction of flight being approximately maintained
(2) : the motion of an aircraft or spacecraft about its longitudinal axis
d : a somersault executed in contact with the ground
on a roll
: in the midst of a series of successes : on a hot streak —sometimes used with a modifier has been on a brilliant roll
Synonyms & Antonyms More Example Sentences Phrases Containing roll Learn More About roll

Examples of roll in a Sentence

Verb The children rolled down the hill. The ball rolled slowly to a stop. Roll the chicken wings in the batter. The paramedics rolled him onto the gurney. The car rolled slowly to a stop. A police car rolled up next to us. The children rolled the toy car to each other. The patient was rolled into the emergency room. The fog soon rolled away. See More

First Known Use of roll

History and Etymology for roll

Learn a new skill with these sushi making kits selected by our Reviews team.

The first known use of roll was in the 13th century 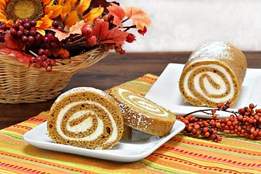 1 : to move or cause to move by turning over and over on a surface The ball rolled away.
2 : to shape or become shaped in rounded form She rolls the dough to make cookies.
3 : to sound with a full echoing tone or with a continuous beating sound rolling thunder
4 : to flow in or as if in a continuous stream Tears came rolling. The day I had waited for so long had turned … ugly.— Wilson Rawls, Where the Red Fern Grows
5 : to move or cause to move in a circular manner She rolled her eyes. He rolled over on his back.
6 : to go by : pass Time rolled by.
7 : to move with a side-to-side sway The ship rolled.
8 : to make smooth, even, or firm with a roller He rolls out the dough.
9 : to move on rollers or wheels
roll around
: to happen again We'll go when Friday rolls around.

Kids Definition of roll (Entry 2 of 3)

1 : something or a quantity of something that is rolled up or rounded as if rolled a roll of tape
2 : a small piece of baked bread dough
3 : a writing that may be rolled up : scroll
4 : an official list of names

Kids Definition of roll (Entry 3 of 3)

1 : a sound produced by rapid strokes on a drum
2 : a heavy echoing sound the roll of thunder
3 : a movement or action that involves turning over and over or circling around

1 : a document containing an official record
2 : an official list the public relief rolls : as
a : a list of members of a legislative body the clerk called the roll and recorded the votes
b : a list of practitioners in a court or the courts of a state —usually used in pl.
c : a record kept by an authorized official of persons or property or both that are subject to taxation

More from Merriam-Webster on roll