See Dictionary Definition
1
as in filthy
severely lacking in cleanliness The squalid boarding house was overrun with rats.

See More
See More
2
as in vile
not moral or honest The whole squalid affair will rightly end the politician's public career.

How does the adjective squalid differ from other similar words?

Some common synonyms of squalid are dirty, filthy, foul, and nasty. While all these words mean "conspicuously unclean or impure," squalid adds to the idea of dirtiness and filth that of slovenly neglect. Distinctively, its figurative use implies sordidness as well as baseness and dirtiness.

squalid slums
engaged in a series of squalid affairs

In what contexts can dirty take the place of squalid?

The words dirty and squalid are synonyms, but do differ in nuance. Specifically, dirty emphasizes the presence of dirt more than an emotional reaction to it or, figuratively, stresses meanness or despicableness.

When could filthy be used to replace squalid?

While the synonyms filthy and squalid are close in meaning, filthy carries a strong suggestion of offensiveness and typically of gradually accumulated dirt that begrimes and besmears. Figuratively, it can also describe disgusting obscenity.

When can foul be used instead of squalid?

In some situations, the words foul and squalid are roughly equivalent. However, foul implies extreme offensiveness and an accumulation of what is rotten or stinking; it can also describe, for example, loathsome behavior.

How does the word nasty relate to other synonyms for squalid?

Nasty applies to what is actually foul or is repugnant to one expecting freshness, cleanliness, or sweetness; in practice, however, nasty is often weakened to the point of being no more than a synonym of unpleasant or disagreeable. When used figuratively, nasty implies a peculiarly offensive unpleasantness. 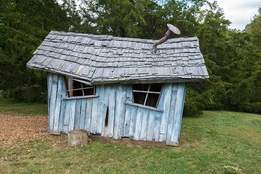 7 Run-Down Words That Have Seen Better...

More from Merriam-Webster on squalid