to free from captivity or punishment by paying a price

as in recovery, redemption

Synonyms & Near Synonyms for ransom

How does the verb ransom contrast with its synonyms?

Some common synonyms of ransom are deliver, reclaim, redeem, rescue, and save. While all these words mean "to set free from confinement or danger," ransom specifically applies to buying out of captivity.

tried to ransom the kidnap victim

When is deliver a more appropriate choice than ransom?

The words deliver and ransom are synonyms, but do differ in nuance. Specifically, deliver implies release usually of a person from confinement, temptation, slavery, or suffering.

delivered his people from bondage

In what contexts can reclaim take the place of ransom?

The meanings of reclaim and ransom largely overlap; however, reclaim suggests a bringing back to a former state or condition of someone or something abandoned or debased.

When is it sensible to use redeem instead of ransom?

The synonyms redeem and ransom are sometimes interchangeable, but redeem implies releasing from bondage or penalties by giving what is demanded or necessary.

When might rescue be a better fit than ransom?

In some situations, the words rescue and ransom are roughly equivalent. However, rescue implies freeing from imminent danger by prompt or vigorous action.

rescued the crew of a sinking ship

Where would save be a reasonable alternative to ransom?

The words save and ransom can be used in similar contexts, but save may replace any of the foregoing terms; it may further imply a preserving or maintaining for usefulness or continued existence.

an operation that saved my life

The first known use of ransom was in the 13th century 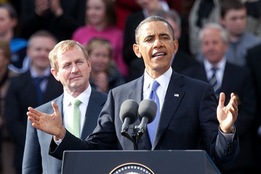 Trending: Obama Says Payment to Iran Was Not 'Ransom'

Lookups for 'ransom' spiked after a State Department spokesperson said the U.S. used the payment as 'leverage'

More from Merriam-Webster on ransom