1a : the liquid that descends from the clouds as rain, forms streams, lakes, and seas, and is a major constituent of all living matter and that when pure is an odorless, tasteless, very slightly compressible liquid oxide of hydrogen H2O which appears bluish in thick layers, freezes at 0° C and boils at 100° C, has a maximum density at 4° C and a high specific heat, is feebly ionized to hydrogen and hydroxyl ions, and is a poor conductor of electricity and a good solvent
b : a natural mineral water —usually used in plural
2 : a particular quantity or body of water: such as
a(1) waters\ ˈwȯ-​tərz

, ˈwä-​ \ plural : the water occupying or flowing in a particular bed
(2) chiefly British : lake, pond
b : a quantity or depth of water adequate for some purpose (such as navigation)
c waters plural
(1) : a band of seawater abutting on the land of a particular sovereignty and under the control of that sovereignty
(2) : the sea of a particular part of the earth
d : water supply threatened to turn off the water
3 : travel or transportation on water we went by water
4 : the level of water at a particular state of the tide : tide
5 : liquid containing or resembling water: such as
a(1) : a pharmaceutical or cosmetic preparation made with water
(2) : a watery solution of a gaseous or readily volatile substance — compare ammonia water
b archaic : a distilled fluid (as an essence) especially : a distilled alcoholic liquor
c : a watery fluid (such as tears, urine, or sap) formed or circulating in a living body
d : amniotic fluid also : bag of waters
6a : the degree of clarity and luster of a precious stone
b : degree of excellence a scholar of the first water
7 : watercolor
8a : stock not representing assets of the issuing company and not backed by earning power
b : fictitious or exaggerated asset entries that give a stock an unrealistic book value
above water
: out of difficulty

Definition of water (Entry 2 of 2)

1 : to moisten, sprinkle, or soak with water water the lawn
2 : to supply with water for drink water cattle
3 : to supply water to lands watered by the river
4 : to treat with or as if with water specifically : to impart a lustrous appearance and wavy pattern to (cloth) by calendering
5a : to dilute by the addition of water —often used with down water down the punch
b : to add to the aggregate par value of (securities) without a corresponding addition to the assets represented by the securities

1 : to form or secrete water or watery matter (such as tears or saliva)
2 : to get or take water: such as
a : to take on a supply of water the boat docked to water
b : to drink water
Synonyms & Antonyms More Example Sentences Phrases Containing water Learn More About water

Examples of water in a Sentence

Noun Would you like a glass of water? There's water dripping from the ceiling. The kids love playing in the water. A stick was floating on the water. They like to vacation near the water. We are sailing in international waters. They were fishing in Canadian waters. Verb We need to water the lawn. They fed and watered the horses in the barn. My eyes were watering as I chopped the onions. See More
Recent Examples on the Web: Noun Paievska described her imprisonment, telling the outlet she was put in solitary confinement and given just half a glass of water each day. — Stephanie Petit, Peoplemag, 8 Aug. 2022 If the pan looks dry, add a splash of water until the tomatoes get saucy. — Karen Yuan, Bon Appétit, 7 Aug. 2022 At one point, the mother briefly left the makeshift bunker to go outside in search of water. — Angie Leventis Lourgos, Chicago Tribune, 6 Aug. 2022 The South Platte River Compact allows Nebraska 500 cubic feet of water per second — with some conditions — in the fall and winter between October 15 and April 1. — Stephanie Elam, CNN, 6 Aug. 2022 Shaving serious weight typically means trading off some durability, and this jacket is no different meaning it’s not the most durable or the most water-resistant. — Mike Richard, Men's Health, 5 Aug. 2022 Attempts by the tiny rural authority to resist this casual annihilation were in vain; by 1965, work on the reservoir was complete and 16.4 million gallons of water turned Capel Celyn into an underwater graveyard. — Elizabeth Lowry, WSJ, 5 Aug. 2022 Some comedic moments get unexpected emphasis, such as when the image of an erupting bidet triggers a spray of water from the nozzle in front of each seat. — J. Kim Murphy, Variety, 5 Aug. 2022 Gallon jugs of water are almost as ubiquitous as bottles. — Rick Childress, Washington Post, 5 Aug. 2022 Recent Examples on the Web: Verb On Mondays, Socorro comes into Semilla to water and sing to the foliage. — Jessica Benda, Los Angeles Times, 21 July 2022 Damon is seen using pee to water his lawn as well as showering in pee, cooking pasta with pee and attempting to lick a frozen pee popsicle. — Zack Sharf, Variety, 13 July 2022 To avoid making your lawn an extra-cozy nursery for Japanese beetles, don’t water the grass. — Beth Botts, chicagotribune.com, 24 July 2021 Along with making sure to keep the parent plants in good shape through the growing season, water them the day before taking cuttings. — Benjamin Whitacre, Better Homes & Gardens, 14 July 2022 To keep containers of annuals blooming, water them regularly and preferably in the morning. — Dave Epstein, BostonGlobe.com, 8 July 2022 Was there a 6-year-old in Brooklyn Park right now, whose mouth, decades from now, would water at some sensory trigger, involuntarily resurrecting the exact texture and smell of a Cheesy Gordita Crunch? — Steve Hoffman, Washington Post, 28 June 2022 Children can water the plants in the Discovery Woods Garden while learning more about how to care for plant life. — BostonGlobe.com, 22 July 2021 Agencies like the Las Virgenes Municipal Water District and the Los Angeles Department of Water have put restrictions where certain addresses can only water on certain days and during the early morning or evening. — Jordan Mendoza, USA TODAY, 2 June 2022 See More

These example sentences are selected automatically from various online news sources to reflect current usage of the word 'water.' Views expressed in the examples do not represent the opinion of Merriam-Webster or its editors. Send us feedback.

First Known Use of water

History and Etymology for water

Our Reviews team has selected the best water bottles.

The first known use of water was before the 12th century 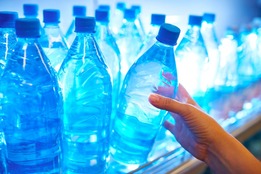 Kids Definition of water (Entry 2 of 2)

1 : to wet or supply with water I'm watering the plants.
2 : to fill with liquid (as tears or saliva) … Papa and the judge laughed until their eyes watered.— Wilson Rawls, Where the Red Fern Grows
3 : to add water to Someone watered down the punch.

1 : the liquid that descends from the clouds as rain, forms streams, lakes, and seas, and is a major constituent of all living matter and that is an odorless, tasteless, very slightly compressible liquid oxide of hydrogen H2O which appears bluish in thick layers, freezes at 0°C (32°F) and boils at 100°C (212°F), has a maximum density at 4°C (39°F) and a high specific heat, is feebly ionized to hydrogen and hydroxyl ions, and is a poor conductor of electricity and a good solvent
2 : liquid containing or resembling water: as
a(1) : a pharmaceutical or cosmetic preparation made with water
(2) : a watery solution of a gaseous or readily volatile substance — see ammonia water
b : a watery fluid (as tears or urine) formed or circulating in a living body
c : amniotic fluid —often used in plural also : bag of waters

Medical Definition of water (Entry 2 of 2)

: to form or secrete water or watery matter (as tears or saliva)

More from Merriam-Webster on water