1a(1) : the biting or cutting edge or part of a tool
(2) : a replaceable part of a compound tool that actually performs the function (such as drilling or boring) for which the whole tool is designed put a new bit in the drill used a 1/4 inch bit to make the hole
b bits plural : the jaws (see jaw entry 1 sense 2a) of tongs or pincers
2 : something bitten or held with the teeth:
a : the usually steel part of a bridle inserted in the mouth of a horse
b : the rimmed mouth end on the stem of a pipe or cigar holder
3 : something that curbs or restrains
4 : the part of a key that enters the lock and acts on the bolt and tumblers (see tumbler sense 3a)

1 : a small quantity of food especially : a small delicacy
2a : a small piece or quantity of some material thing broken bits of glass picking bits of lint off her sweater
b(1) British : a coin of a specified small denomination a threepenny bit
(2) : a unit of value equal to ¹/₈ of a U.S. dollar (12 ¹/₂ cents) —used only of even multiples four bits

Note: No coin was ever issued in this amount.

— see also two bits sense 1
3 : something small or unimportant of its kind: such as
a : a brief period : while wait a bit longer
b : an indefinite usually small degree, extent, or amount a bit of a rascal every bit as powerful a bit too sweet
c theater
(1) : a small part usually with spoken lines in a theatrical performance a bit part bit players
(2) : a usually short theatrical routine a corny comedy bit
4 : the aggregate of items, situations, or activities appropriate to a given style, genre, or role rejected the whole bit about love-marriage-motherhood— Vance Packard
a bit
: somewhat, rather the play was a bit dull
a bit much
: a little more than one wants to endure finds his constant joking a bit much
bit by bit
: by degrees : little by little getting better bit by bit
to bits
: totally, thoroughly thrilled to bits

1 computers : a unit of computer information equivalent to the result of a choice between two alternatives (such as yes or no, on or off)
2 computers : the physical representation of a bit by an electrical pulse, a magnetized spot, or a hole whose presence or absence indicates data

First Known Use of bit

History and Etymology for bit

Middle English bite, bit "bite of an animal, cutting edge, point, mouthpiece of a bridle," going back to Old English bite "bite of an animal, cut from a weapon," going back to Germanic *biti- (whence Old Saxon biti "bite, sting," Old High German biz [gebiz "mouthpiece of a bridle"], Old Norse bit), noun derivative from the base of *bītan- "to bite" — more at bite entry 1

Note: The term bit was introduced into general circulation by Claude shannon in "A Mathematical Theory of Communication," Bell System Technical Journal, vol. 27, July, 1948, p. 380: "The choice of a logarithmic base corresponds to the choice of a unit for measuring information. If the base 2 is used the resulting units may be called binary digits, or more briefly bits, a word suggested by J.W. Tukey." The American mathematician John W. Tukey (1915-2000) had used the word in a Bell Labs memorandum, "Sequential Conversion of Continuous Data to Digital Data," dated January 9, 1947. Tukey employed bit as a counterpart in a binary system to digit in the decimal system. For details see "The Origin of Bit" in the "Anecdotes" section of Annals of the History of Computing, vol 6, no. 2 (April, 1984), pp. 152-55.

The first known use of bit was before the 12th century 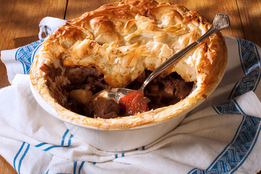 Times—and the language—were different back then

1 : a small piece or quantity a bit of food
2 : a short time Rest a bit.
a bit
: somewhat entry 1 a bit of a fool
bit by bit
: by small steps or amounts : gradually Bit by bit, the truth came out.

Kids Definition of bit (Entry 2 of 3)

1 : a part of a bridle that is put in the horse's mouth
2 : the cutting or boring edge or part of a tool

Kids Definition of bit (Entry 3 of 3)

: a unit of computer information that represents the selection of one of two possible choices (as on or off)

More from Merriam-Webster on bit