1
a
: the specialized part of an angiospermous plant that occurs singly or in clusters, possesses whorls of often colorful petals or sepals, and bears the reproductive structures (such as stamens or pistils) involved in the development of seeds and fruit : blossom
b
: a cluster of small flowers growing closely together that resembles and is often viewed as a single flower : inflorescence
a hydrangea flower
c
: a plant grown or valued for its flowers
planted flowers in the front yard
d
: a cut stem of a plant with its flower
a bouquet of flowers
e
: bloom entry 2 sense 1b
lilacs in full flower
2
a
: the best part or example
the flower of our youth
b
: the finest most vigorous period
wasted the flower of their lives
c
: a state of blooming or flourishing
in full flower
3
flowers plural : a finely divided powder produced especially by condensation or sublimation
flowers of sulfur
flowered
ˈflau̇(-ə)rd

1
a
: develop
flowered into young womanhood
b
: flourish sense 2
2
: to produce flowers : blossom

1
: to cause to bear flowers
2
: to decorate with flowers or floral designs
flowerer
ˈflau̇(-ə)r-ər

Noun We planted flowers in the garden. He sent her a bouquet of flowers. He wore a single flower in his lapel. Verb This tree flowers in early spring. The plant will flower every other year. His genius flowered at the university. a political movement that began to flower during the 1960s See More
Recent Examples on the Web
Noun
California's Coachella Valley is readying itself for another invasion of flower crowns and pop superstars with the announcement of this year's headliners. —

David Gilbert, The New Yorker, 10 Oct. 2022 But as in years past at the festival, kids lined up excitedly to recite poetry in stumbling Ukrainian and dance in bright red leather boots, velvet red vests and flower crowns of pink and blue, gold and green. —

Reuters, NBC News, 20 Aug. 2022 Hambro, then 5, and Cameron, 6, were the youngest of the group, and also wore flower crowns to match their bouquets. —

Nicole Briese, Peoplemag, 12 Aug. 2022 The hourslong affair began with a nonlegal, symbolic ceremony, before which event staff handed out bouquets and flower crowns to some revelers, while others got henna tattoos and posed for photographs under rainbow streamers and treetop lanterns. —

Tom Maccubbin, Orlando Sentinel, 21 Jan. 2023 Short days and cool nights signal the plant to produce blossoms at the end of each stem, which then flower in shades of pink and red, depending on the variety. —

Paul Cappiello, The Courier-Journal, 22 Oct. 2022 Many summer-blooming shrubs set their flowers on the current season’s growth so they can be pruned heavily in winter and will usually still flower the following summer. —

Paul Cappiello, The Courier-Journal, 22 Oct. 2022 The good news, however, is new plants, called pups, can form at the base to flower in not a century, but about 10 or so years. —

Tom Maccubbin, Orlando Sentinel, 10 Sep. 2022 The effort was launched in July 2020, showing what can flower when neighbors unite. —

Los Angeles Times, 23 Aug. 2022 Nutsedge will flower and produce seeds when not mowed, but the seeds generally do not germinate. —

These example sentences are selected automatically from various online news sources to reflect current usage of the word 'flower.' Views expressed in the examples do not represent the opinion of Merriam-Webster or its editors. Send us feedback.

Middle English flouren "(of a plant) to blossom, to bloom, be vigourous," derivative of flour, flur flour entry 1

Can you tell the difference between a lilac and a hyacinth? 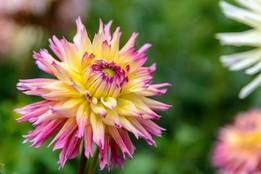 Is That Plant 'Perennial' or 'Annual'?

We get asked at least once a year

1
a
: a specialized plant part that occurs singly or in clusters, possesses often colorful petals or sepals, and bears reproductive organs involved in the development of seeds and fruit : blossom
b
: a cluster of small flowers growing closely together that resembles and is often viewed as a single flower : inflorescence
a hydrangea flower
c
: a plant grown or valued for its flowers
planted flowers
d
: a cut stem of a plant with its flower
a bouquet of flowers
2
: the best part or example
in the flower of his youth
flowerless
-ləs

More from Merriam-Webster on flower