1
: to lead astray
especially : seduce
a nation betrayed into violence
a teenager betrayed by a much older man
2
: to deliver to an enemy by treachery
was betrayed to the authorities by one of his students
betraying one's own country
3
: to fail or desert especially in time of need
betrayed his family
felt that she would be betraying her principles
You've betrayed our trust.
4
a
: to reveal unintentionally
betray one's true feelings
b
: show, indicate
His best columns betray … the philosophical bent of his mind.—

John Mason Brown
c
: to disclose in violation of confidence
betray a secret

Choose the Right Synonym for betray

reveal, disclose, divulge, tell, betray mean to make known what has been or should be concealed.

reveal may apply to supernatural or inspired revelation of truths beyond the range of ordinary human vision or reason.

divine will as revealed in sacred writings

disclose may imply a discovering but more often an imparting of information previously kept secret.

candidates must disclose their financial assets

divulge implies a disclosure involving some impropriety or breach of confidence.

refused to divulge an anonymous source

tell implies an imparting of necessary or useful information.

told them what he had overheard

betray implies a divulging that represents a breach of faith or an involuntary or unconscious disclosure.

a blush that betrayed her embarrassment

They betrayed their country by selling its secrets to other governments. She is very loyal and would never betray a friend. She betrayed her own people by supporting the enemy. She coughed, betraying her presence behind the door.
Recent Examples on the Web But a mysterious woman named Cipher (Charlize Theron) ends this, forcing Toretto to betray his family and join her. —

Olivia Munson, USA TODAY, 29 July 2022 Gun Owners of America, which looks down on the NRA as too willing to compromise, sent email blasts accusing Cornyn of trying to betray gun owners and pass universal background checks. —

Todd J. Gillman And Joseph Morton, Dallas News, 6 June 2022 Future countries that face balancing digital payment rails and economic demand should be leery of support that comes from polar powers that easily betray those that are deemed allies or enemies. —

Roger Huang, Forbes, 18 Dec. 2022 Blended with Persian acacia extract, this complexion helper, beloved by Aharon, will smooth and plump your skin, imbuing it with a luminosity that wouldn't betray any sleep deprivation whatsoever. —

Roxanne Adamiyatt, Town & Country, 16 Dec. 2022 Professor Yandell Henderson of Yale University proposes to introduce into the gas supply a strong odor which would betray even a slight leak long before there was danger from it. —

Mark Fischetti, Scientific American, 1 Oct. 2022 This Santa gave them a gift to remember Those who say the more diverse representations of Santa betray the values of the holiday season may be forgetting about another iconic Christmas character: Rudolph the Red-Nosed Reindeer. —

John Blake, CNN, 18 Dec. 2022 Snatches of overheard phone conversations betray parents’ exasperation but no real desperation; the exuberant boing of a child’s outdoor trampoline is a recurring motif on the soundtrack. —

These example sentences are selected automatically from various online news sources to reflect current usage of the word 'betray.' Views expressed in the examples do not represent the opinion of Merriam-Webster or its editors. Send us feedback.

Middle English, from be- + trayen to betray, from Anglo-French trahir, from Latin tradere — more at traitor 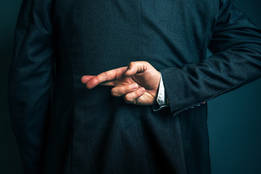 Spicer: 'I'm not going to define the word'

1
: to give over to an enemy by treachery
2
: to be unfaithful to
betrayed our trust
3
: to reveal without meaning to
betrayed their ignorance
4
: to tell in violation of a trust
betray a secret
betrayal
-ˈtrā(-ə)l

More from Merriam-Webster on betray