Or, here's the reason some of them look and sound that way. 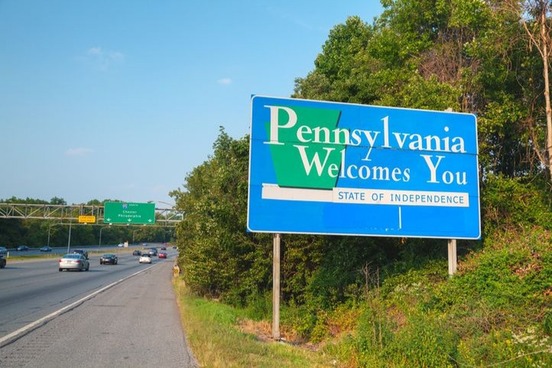 The two adjacent n's in Pennsylvania are derived from the surname of William Penn, the founder of the Quaker colony in America that eventually became the state of Pennsylvania. Across the pond, Penn wasn't exactly well liked: he was expelled from Oxford for his Puritan beliefs and was imprisoned for publishing material in support of Quaker doctrine. With that said, his father was the knighted Admiral William Penn, and some etymologies suggest that the first part of the state's name may have been influenced by the senior. Junior, however, inherited estates and the influence of King Charles II, who granted him a vast province on the Delaware River in payment for debts owed his father.

The middle part of Pennsylvania is sylvan, a word that originally referred to a mythological deity of the woods before gaining the general meaning "one who frequents the woods." Sylvan also has adjectival use describing people or things living or located in the woods or things relating to or characteristic of the woods.

The word's ultimate -ia is a noun suffix from Latin and Greek that is used in English to indicate place-names (e.g., suburbia).

All roots considered: the name Pennsylvania can be translated as "the woods belonging to Penn." It is pronounced with an initial \pen-\ or \pent-\ and a terminal \-nyə\ or \-nē-ə\ (as in the ending of mania). 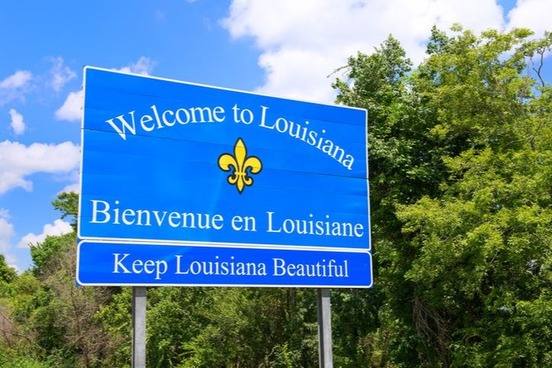 The French explorer La Salle claimed the area around the southern Mississippi in the name of King Louis XIV of France in 1682, and he named it Louisiana in the king's honor. Today, this state is often pronounced \lew-ee-zee-AN-a\. But the king's name was Louis and not Louise, so shouldn't the correct pronunciation be \LEW-is-ee-AN-a\?

Since the area was settled largely by the French, it was naturally subject to French influence. In French, the name Louis is not pronounced like Lewis but like Louie. The final s is not normally pronounced. When an s occurs between two vowels in a French word, however, as it does in Louisiana, it is pronounced as \z\. Thus, the pronunciation \lew-ee-zee-AN-a\ is consistent with the French origins of the state's name. 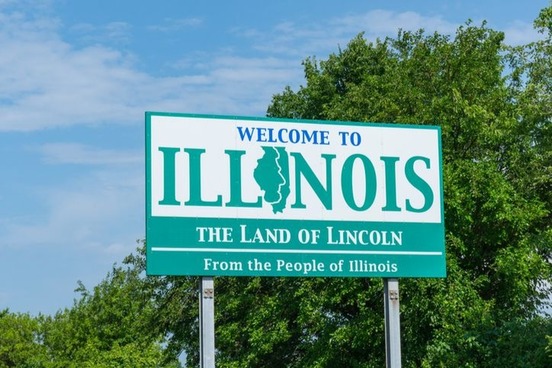 The common pronunciation of the state of Illinois ends with \NOY\, but you might hear a pronunciation ending in \z\, similar to that in noise, especially in southern areas of the U.S. The word is French-based so the French pronunciation \ill-i-NOY\ makes less noise.

Illinois is ultimately from Algonquian (a family of American Indian languages spoken by peoples from Canadian Labrador to Carolina and westward into the Great Plains) in which it translates as "one who sounds normal"—that is to say, "one who speaks an Algonquian language (specifically, Ojibwa or Ottawa)"—and it is akin to Miami alänia, meaning "man," and a Shawnee word of the same meaning. In English, it was initially used as a name for the confederacy of Native American peoples of the region of Illinois as well as of Iowa and Wisconsin. 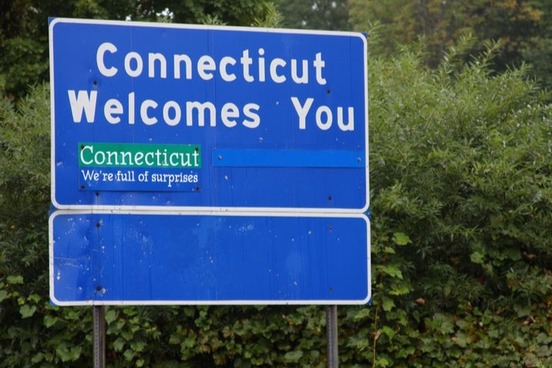 The name of the state of Connecticut is suspected to be connected to Mahican quinnitukq-ut, meaning "at the long tidal river" (that being the Connecticut River). The area was colonized by English Puritans from the Massachusetts Bay Colony during the 1630s. The state's name is pronounced with a glottal stop in the middle (which is a momentary catching and sudden release of air flow at the back of the throat); in this case, the stop is after the e, which usually results in the middle c being unpronounced. 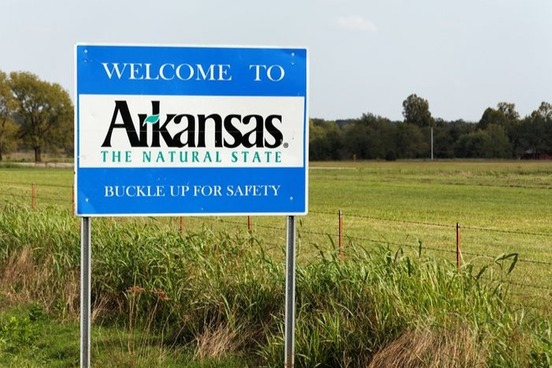 Arkansas and Kansas derive from European spellings of the Native American tribal names Acansa and Kansa. The final s of both state names was originally the plural morpheme -s, added to indicate that the words referred to a group of people, as in Apaches or Navajos. (A morpheme is a separately meaningful, conventionally combinable linguistic element. In the word pins, for example, both pin and -s are morphemes.)

The plural suffix -s is pronounced in English but not in French, and the French settlers of the Arkansas territory would not have pronounced it in the territory's name, which was recognized later by the state in 1881:

Be it therefore resolved by both Houses of the General Assembly, That the only true pronunciation of the name of the State, in the opinion of this body, is that received by the French word representing the sound; and that it should be pronounced in three syllables, with the final "s" silent. The "a" in each syllable with the Italian sound, and the accent on the first and last syllables, being the pronunciation formerly universally and now still most commonly used; and that the pronunciation with the accent on the second syllable, with the sound of "a" in man, and the sounding of the terminal "s" is an innovation to be discouraged.
— Thomas James Churchill (Governor of Arkansas)

The Arkansas River is, however, sometimes referred to, especially by locals, using a terminal \s\ in Arkansas. In the case of Kansas, the last s is, for some unbeknownst reason, pronounced; the state of Kansas, like Arkansas, was also formerly a French territory.

Etymologists are not certain of the meanings of Acansa and Kansa in the native languages. The name Acansa was used by the Illinois to refer to the Quapaw tribe. The Quapaw (whose name translates as "downstream people") lived near the mouth of the Arkansas River, and they did not use the name themselves, and it is doubtful that it was a complimentary epithet. The Quapaw were also given the name Ozark, a likely derivation of French Aux Arcs, the name of a French post among the Quapaw that is a shortening of aux Arkansas (meaning "at the Quapaw"). 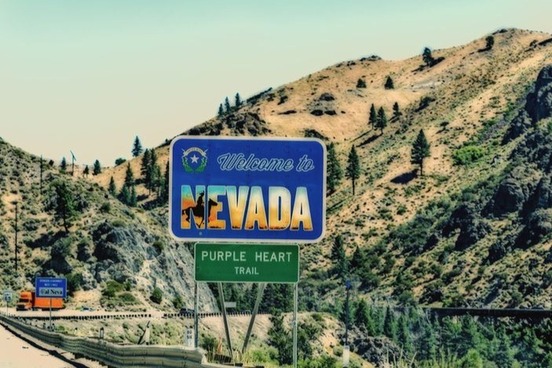 The pronunciation of Missouri—a word that is derived from French and Native American Illinois and that originally meant "owners of big canoes"—depends on whether you're a resident of the state as well as where your residency is. Some residents say the ending with a schwa, \mə-ˈzu̇r-ə\, whereas some end the state's name with a long e sound—like the French would. (A similar residential phenomenon occurs in the name of the city of Cincinnati in Ohio.) The populace pronounce the i in Missouri as a long e. We recognize both pronunciations as acceptable. 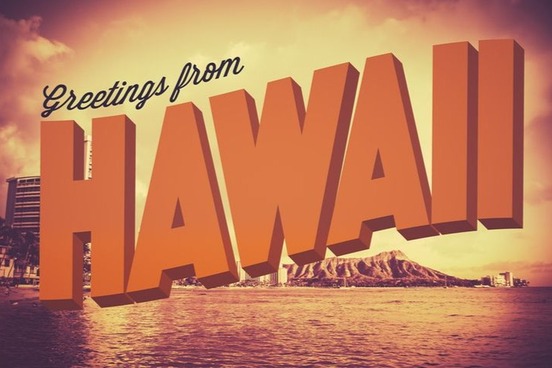 The reversed apostrophe in the variant spelling Hawai'i signals a glottal stop, which is the sound produced by a momentary catching and sudden release of air flow at the back of the throat. For example, it is the sound one makes between the vowels of the interjection uh-oh. 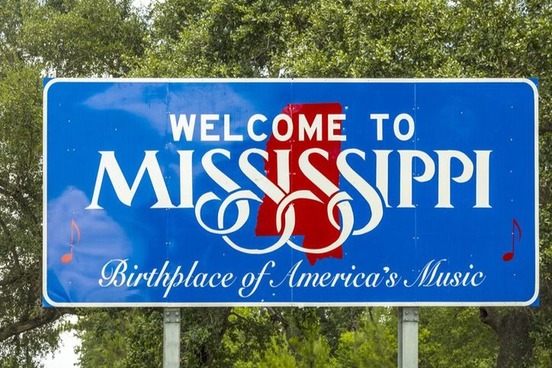 Mississippi is of Algonquian origin, and it is akin to Misisipi, an Ojibwa compound of misi, meaning "big," and sipi, "river"—and the Mississippi River is undeniably big. Spelling the state's name can be a big challenge to learners of the English language, but the letters (M-I-S-S-I-S-S-I-P-P-I) form a catchy, popular, mnemonic tune. If that doesn't work, think twos and fours—that is, it has 2 pairs of s's, 2 p's, and 4 i's.