the state or an instance of going beyond what is usual, proper, or needed

Near Antonyms for surfeit

Synonyms & Antonyms of surfeit (Entry 2 of 2)

to fill with food to capacity

Near Antonyms for surfeit

How is the word surfeit different from other verbs like it?

Some common synonyms of surfeit are cloy, glut, gorge, pall, sate, and satiate. While all these words mean "to fill to repletion," surfeit implies a nauseating repletion.

surfeited themselves with junk food

When could cloy be used to replace surfeit?

While in some cases nearly identical to surfeit, cloy stresses the disgust or boredom resulting from such surfeiting.

sentimental pictures that cloy after a while

In what contexts can glut take the place of surfeit?

While the synonyms glut and surfeit are close in meaning, glut implies excess in feeding or supplying.

a market glutted with diet books

Where would gorge be a reasonable alternative to surfeit?

Although the words gorge and surfeit have much in common, gorge suggests glutting to the point of bursting or choking.

gorged themselves with chocolate

When might pall be a better fit than surfeit?

The synonyms pall and surfeit are sometimes interchangeable, but pall emphasizes the loss of ability to stimulate interest or appetite.

a life of leisure eventually begins to pall

How do satiate and sate relate to one another, in the sense of surfeit?

Both satiate and sate may sometimes imply only complete satisfaction but more often suggest repletion that has destroyed interest or desire.

years of globe-trotting had satiated their interest in travel

readers were sated with sensationalistic stories

The first known use of surfeit was in the 14th century

Listen to Our Podcast About surfeit 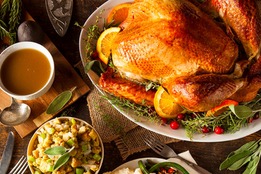 The best way to avoid uncomfortable conversation at Thanksgiving? Talk about the food.

More from Merriam-Webster on surfeit