1a : to fasten, attach, or close by means of a tie
b : to form a knot or bow in tie your scarf
c : to make by tying constituent elements tied a wreath tie a fishing fly
2a : to place or establish in relationship : connect
b : to unite in marriage
c : to unite (musical notes) by a tie
d : to join (power systems) electrically
3 : to restrain from independence or freedom of action or choice : constrain by or as if by authority, influence, agreement, or obligation
4a(1) : to make or have an equal score with in a contest
(2) : to equalize (the score) in a game or contest
(3) : to equalize the score of (a game)
b : to provide or offer something equal to : equal

: to make a tie: such as
a : to make a bond or connection
b : to make an equal score
c : to become attached
d : to close by means of a tie
tie into
: to attack with vigor
tie one on
slang
: to get drunk
tie the knot
: to perform a marriage ceremony also : to get married

1a : a line, ribbon, or cord used for fastening, uniting, or drawing something closed especially : shoelace
b(1) : a structural element (such as a rod or angle iron) holding two pieces together : a tension member in a construction
(2) : any of the transverse supports to which railroad rails are fastened to keep them in line
2 : something that serves as a connecting link: such as
a : a moral or legal obligation to someone or something typically constituting a restraining power, influence, or duty
b : a bond of kinship or affection
3 : a curved line that joins two musical notes of the same pitch to denote a single tone sustained through the time value of the two
4a : an equality in number (as of votes or scores)
b : equality in a contest also : a contest that ends in a draw
5 : a method or style of tying or knotting
6 : something that is knotted or is to be knotted when worn: such as
a : necktie
b : a low laced shoe : oxford
Other Words from tie Synonyms & Antonyms Example Sentences Phrases Containing tie Learn More About tie

Other Words from tie

Examples of tie in a Sentence

Verb His kidnappers tied him to a chair. She tied a scarf around her neck. She tied knots in the rope. You need to tie your shoe. His hands and feet had been tied together. She tied the apron loosely around her waist. The team still has a chance to tie. I had the lead but he tied me by making a birdie on the last hole. Her time tied the world record. He tied the school's record in the high jump. Noun He was wearing a suit and tie. You have a spot on your tie. The pants have a tie at the top. He was not ready to accept the ties of family life. See More
Recent Examples on the Web: Verb The Cardinals still had one more chance to tie or win the game, however. — Brooks Holton, The Courier-Journal, 11 June 2022 Cleveland missed a chance to at least tie the score in the eighth. — Paul Hoynes, cleveland, 4 June 2022 The Eagles had a chance to tie the game with the ball in the stick of their most lethal offensive weapon in graduate student attacker Charlotte North. — Edward Lee, Baltimore Sun, 29 May 2022 Olympus had a chance to tie but was unable to find the net to send the game into overtime. — The Salt Lake Tribune, 27 May 2022 Earlier, Birmingham failed to handle two bunts in the inning, giving El Camino Real the chance to tie. — Los Angeles Times, 25 May 2022 Antetokounmpo went to the the line with a chance to tie it and made the first, then Portis grabbed the rebound of the second and put it in off the backboard to give Milwaukee its first lead since early in the second quarter. — Jimmy Golen, Hartford Courant, 12 May 2022 After collecting the rebound off Collin Gillespie’s missed second free throw, Martin had the chance to tie the game but didn’t get a half court shot off in time. — Shreyas Laddha, courant.com, 11 Mar. 2022 Gretsch has a chance to tie that, and Masters to beat it, before Beijing is in the books. — Christa Sgobba, SELF, 8 Mar. 2022 Recent Examples on the Web: Noun Meanwhile, William looked elegant in a dark navy suit, white shirt, and bright blue-and-red tie. — Chelsey Sanchez, Harper's BAZAAR, 22 June 2022 Everyone needs a white dress in their summer closet, and this tie-front button-down midi fits the bill. — Claire Harmeyer, PEOPLE.com, 22 June 2022 Netflix, which is hoping to boost revenue by selling ads around its programming, is still in the early stages of developing the strategy and has explored a range of tie-ups in recent weeks. — Sarah Krouse, WSJ, 22 June 2022 William, meanwhile, also looked well-dressed in a navy suit and white shirt with a bright blue-and-red tie. — Sophie Dweck, Town & Country, 22 June 2022 It’s a tie-dyed shirt with the pierogi logo on the front. — John Benson, cleveland, 21 June 2022 On Sunday, Scottie Scheffler and Will Zalatoris each received more than $1.5 million for their tie for second place. — Jason Mastrodonato, Hartford Courant, 20 June 2022 Painting sunsets and tie-dying T-shirts might be more closely associated with middle school than corporate America, but such artistic activities are making their way into workplace wellness. — Rina Raphael, Los Angeles Times, 20 June 2022 When all the school songs were sung, 79,432 fans saw the college players and the Chicago Bears, champions of the National Football League, battle to a 0-0 tie. — Ron Grossman, Chicago Tribune, 19 June 2022 See More

These example sentences are selected automatically from various online news sources to reflect current usage of the word 'tie.' Views expressed in the examples do not represent the opinion of Merriam-Webster or its editors. Send us feedback.

First Known Use of tie

History and Etymology for tie

The first known use of tie was before the 12th century 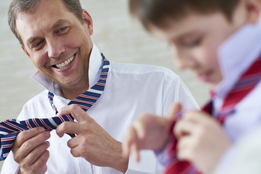 Why Do People Give Ties for Father's...

tidy up after (someone)

1 : necktie
2 : an equality in number (as of votes or scores) The game ended in a tie.
3 : a contest that ends with an equal score They finished the season with six wins and two ties.
4 : one of the cross supports to which railroad rails are fastened
5 : a connecting link : bond family ties
6 : a line, ribbon, or cord used for fastening, joining, or closing
7 : a part (as a beam or rod) holding two pieces together

Kids Definition of tie (Entry 2 of 2)

1 : to fasten, attach, or close by means of a tie
2 : to form a knot or bow in
3 : to bring together firmly : unite They are tied by marriage.
4 : to hold back from freedom of action Obligations tied her down.
5 : to make or have an equal score with in a contest

More from Merriam-Webster on tie