1
: to harass or punish in a manner designed to injure, grieve, or afflict
specifically : to cause to suffer because of belief
2
: to annoy with persistent or urgent approaches (such as attacks, pleas, or importunities) : pester
persecutee
ˌpər-si-ˌkyü-ˈtē

Take care to distinguish between prosecuted and persecuted, although we sincerely hope that neither word applies to you. Persecute typically has a small range of meanings, such as “to harass or punish in a manner designed to injure, grieve, or afflict.” Although the word is occasionally found in dialectal use to mean “prosecute,” many usage guides consider this to be an error. Prosecute is generally found today in a legal context (“to bring legal action against for redress or punishment of a crime or violation of law”), although the word may also be used to mean “to follow to the end” or “to engage in.” If someone is prosecuted they are being tried in a court of law; if they are persecuted they are being targeted and harassed.

Choose the Right Synonym for persecute

wrong implies inflicting injury either unmerited or out of proportion to what one deserves.

a penal system that had wronged him

oppress suggests inhumane imposing of burdens one cannot endure or exacting more than one can perform.

a people oppressed by a warmongering tyrant

persecute implies a relentless and unremitting subjection to annoyance or suffering.

a child persecuted by constant criticism

aggrieve implies suffering caused by an infringement or denial of rights.

The country's leaders relentlessly persecuted those who fought against the regime. They were persecuted for their beliefs.
Recent Examples on the Web Although the United States has been a major player in Iraqi politics since the 2003 invasion, Iraqi leaders have at times exploited the ignorance or indifference of allies in Washington by using promises of reform to persecute their rivals. —

Laura Zornosa, Time, 23 Nov. 2022 According to the resolution, the video accuses Ho, Manzo and Do of conspiring to persecute Venerable Vien Ly, the abbot of Chua Dieu Ngu Buddhist temple in Westminster. —

Anh Dostaff Writer, Los Angeles Times, 24 Apr. 2022 But over the years the government continued to persecute religious minorities and political dissenters and isolate itself internationally, and opportunities withered for many Iranians regardless of religion. —

These example sentences are selected automatically from various online news sources to reflect current usage of the word 'persecute.' Views expressed in the examples do not represent the opinion of Merriam-Webster or its editors. Send us feedback. 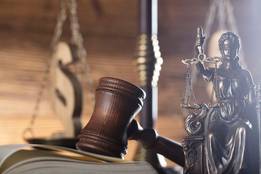 One you do in court, the other you do if you're a jerk

persecuted; persecuting
1
: to treat continually in a way meant to be cruel or harmful
especially : to cause to suffer because of belief
2
: annoy, pester
persecutor
-ˌkyüt-ər

More from Merriam-Webster on persecute