1
: something owed : obligation
unable to pay off his debts
owe them a debt of gratitude
a criminal's debt to society
2
: a state of being under obligation to pay or repay someone or something in return for something received : a state of owing
deeply in debt to creditors
3
law and business : the common-law action for the recovery of money held to be due
4
: sin, trespass
Forgive us our debts.
debtless
ˈdet-ləs

He is trying to pay off gambling debts. The company has run up huge debts. Their debts are piling up. He's been working three jobs in an attempt to get out of debt. The company was in debt but is now turning a profit. I am deep in debt. I'm thousands of dollars in debt. She went into debt to pay for college. I'm worried that we will fall into debt. See More
Recent Examples on the Web This is yet another challenge to debt-riddled borrowers who can’t afford to make full repayment.

Benoît Morenne, WSJ, 26 Nov. 2022 This high-cost season can leave you with debt that sticks around.

CBS News, 25 Nov. 2022 Heavy fines could be a major problem for Twitter, which, as part of Elon Musk’s takeover, was loaded with debt.

WIRED, 23 Nov. 2022 The interest payments for that debt totals more than $1 billion annually.

Ryan Mac, New York Times, 22 Nov. 2022 The judge did not address either shut-offs for nonpayment or customer debt.

Sarah Alvarez, ProPublica, 17 Nov. 2022 The film tells the story of a middle-aged fisherman who, faced with mounting debt, begins to smuggle refugees across a lake on Greece’s northern border.

Christopher Vourlias, Variety, 15 Nov. 2022 Growth is slowing or expected to slow in the United States, Europe, the United Kingdom and China, while high food and energy bills resulting from the conflict in Ukraine are driving poor nations in Africa, the Middle East and Asia deeper into debt.

These example sentences are selected automatically from various online news sources to reflect current usage of the word 'debt.' Views expressed in the examples do not represent the opinion of Merriam-Webster or its editors. Send us feedback.

Middle English dette, debte, from Anglo-French dette something owed, from Vulgar Latin *debita, from Latin, plural of debitum debt, from neuter of debitus, past participle of debēre to owe, from de- + habēre to have — more at give 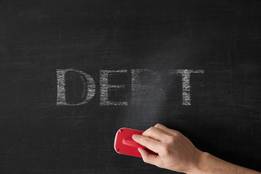 noun
1
: something owed: as
a
: a specific sum of money or a performance due another especially by agreement (as a loan agreement)
to pay the debts…of the United States

U.S. Constitution art. I
a debt for alimony
b
: an obligation to pay or perform on another's claim
discharged the debt
compare asset, equity sense 4

Note: It is often up to the courts to decide what is or is not a debt under various laws. Courts disagree whether criminal restitution is a debt under the Bankruptcy Code.

— antecedent debt
: debt that is incurred prior to a property transfer paying or securing the debt compare preference
— bad debt
: a debt that cannot be collected

Note: An income tax deduction is allowed for bad debts.

— consumer debt
: debt that is incurred by an individual primarily for the purchase of consumer goods or services compare consumer credit
— judgment debt
: a debt established by a judgment and enforceable by a legal process (as an execution of judgment or attachment)
c
: a state of owing
in debt
d
: the aggregate of money owed
the national debt
2
: the common-law action for the recovery of a specified sum of money or a sum that can be simply and certainly determined

History and Etymology for debt

Old French dette, ultimately from Latin debita, plural of debitum debt, from neuter of debitus, past participle of debere to owe

More from Merriam-Webster on debt