formal : to talk usually informally with someone : to have a conversation They conversed quietly in the corner of the room. At home we often converse in Spanish.

1 : to exchange thoughts and opinions in speech : talk spent a few minutes conversing about the weather The leaders were bellowing so loudly that you had to shout to converse with your dinner partner.— Christopher Buckley
2 archaic
a : to have acquaintance or familiarity
b : to become occupied or engaged

Definition of converse (Entry 2 of 4)

1 dated : conversation … Mrs Walker, like many other mothers, was apt to be more free in converse with her daughter than she was with her son.— Anthony Trollope Graham Bretton had dined with us that day; he had shone both in converse and looks.— Charlotte Brontë
2 archaic : social interaction

Definition of converse (Entry 3 of 4)

Definition of converse (Entry 4 of 4)

1 : reversed in order, relation, or action Socrates, while he said that the true tragic writer was also an artist in comedy, did not lay down the converse proposition that the true comic writer is also an artist in tragedy.— Samuel Alexander
2 : being a logical or mathematical converse the converse theorem
Other Words from converse Synonyms More Example Sentences Learn More About converse

Other Words from converse

Examples of converse in a Sentence

Verb They conversed quietly in the corner of the room. At home we often converse in Spanish. Adjective One must also consider the converse case.
See More

First Known Use of converse

1570, in the meaning defined above

History and Etymology for converse

Middle English, to live (with), from Anglo-French converser, from Latin conversari

The first known use of converse was in the 15th century 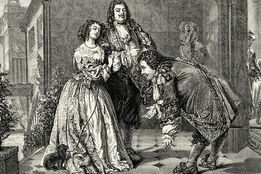 Language: You're Doing It Wrong

Language: You're Doing It Wrong

: to talk to another person or to other people

More from Merriam-Webster on converse