1a(1) : oral exchange of sentiments, observations, opinions, or ideas … we had talk enough but no conversation; there was nothing discussed.— Samuel Johnson
(2) : an instance of such exchange : talk a quiet conversation
b : an informal discussion of an issue by representatives of governments, institutions, or groups conversations among the senators
c : an exchange similar to conversation We had a conversation by email.
2 obsolete : conduct, behavior
Other Words from conversation Synonyms Example Sentences Learn More About conversation

Other Words from conversation

Examples of conversation in a Sentence

Recent Examples on the Web The conversation, lightly edited for length and clarity, follows below. — Marianne Garvey, CNN, 13 Jan. 2022 For more of the Boston bromance's tender conversation, including a comprehensive rundown of titles from Affleck's career, check out the video above. — Rachel Schonberger, EW.com, 13 Jan. 2022 But before her departure, Roberts Parker also contributed heavily to the conversation, including speaking about a knitting community bond that transcends race and ethnic identities. — Scott Talley, Freep.com, 7 Jan. 2022 Anyway, without further ado, here’s my conversation with Benjamin Cleary and Mahershala Ali. — Los Angeles Times, 5 Jan. 2022 Now is the time for open, honest conversation about cultural differences and expectations. — Globe Staff, BostonGlobe.com, 5 Jan. 2022 Our conversation, which took place over four days, was pocked with hours of silence. — Gemma Sieff, Harper’s Magazine , 4 Jan. 2022 In one scene in Jimmy Goldblum’s documentary about the Syrian architect Mohamad Hafez, Hafez initiates a difficult, even raw conversation with his mother about how their idea of home and family will never be the same after Syria’s civil war. — Rachel Riederer, The New Yorker, 29 Dec. 2021 Then listeners are given a gift: the first public conversation between Hill and Christine Blasey Ford, the professor who accused Supreme Court Justice Brett Kavanaugh of assaulting her in high school—allegations which Kavanaugh has denied. — Eric Mcquade, The Atlantic, 27 Dec. 2021

These example sentences are selected automatically from various online news sources to reflect current usage of the word 'conversation.' Views expressed in the examples do not represent the opinion of Merriam-Webster or its editors. Send us feedback.

First Known Use of conversation

History and Etymology for conversation

Middle English conversacioun, from Anglo-French conversacion, from Latin conversation-, conversatio, from conversari to associate with, frequentative of convertere to turn around

The first known use of conversation was in the 14th century 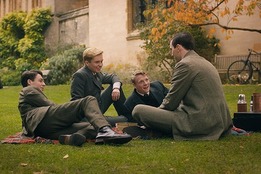 In celebration of the film 'Tolkien'

carry on a conversation

: a talk between two or more people : the act of talking

Other Words from conversation

More from Merriam-Webster on conversation