1a : to consume fuel and give off heat, light, and gases a small fire burns on the hearth
b : to undergo combustion also : to undergo nuclear fission or nuclear fusion
c : to contain a fire a little stove burning in the corner
d : to give off light : shine, glow a light burning in the window
2a : to be hot the burning sand
b : to produce or undergo discomfort or pain ears burning from the cold
c : to become emotionally excited or agitated: such as
(1) : to yearn ardently burning to tell the story
(2) : to be or become very angry or disgusted the remark made him burn
3a : to undergo alteration or destruction by the action of fire or heat the house burned down the potatoes burned to a crisp
b : to die in the electric chair
4 : to force or make a way by or as if by burning her words burned into his heart
5 : to suffer sunburn she burns easily

1a : to cause to undergo combustion especially : to destroy by fire burned the trash
b : to use as fuel this furnace burns gas
c : to use up : consume burn calories
2a : to transform by exposure to heat or fire burn clay to bricks
b : to produce by burning burned a hole in his sleeve
c : to record digital data or music on (an optical disk) using a laser burn a CD also : to record (data or music) in this way burn songs onto a disk
3a : to injure or damage by or as if by exposure to fire, heat, or radiation : scorch burned his hand
b : to execute by burning burned heretics at the stake also : electrocute
4a : irritate, annoy —often used with up really burns me up
b : to subject to misfortune, mistreatment, or deception —often used in passive has been burned in love
c : to beat or score on burned the defense with a touchdown pass
burn one's bridges or less commonly burn one's boats
: to cut off all means of retreat
burn one's ears
: to rebuke strongly
burn the candle at both ends
: to use one's resources or energies to excess
burn the midnight oil
: to work or study far into the night

1 : an act, process, instance, or result of burning: such as
a : injury or damage resulting from exposure to fire, heat, caustics, electricity, or certain radiations
b : a burned area a burn on the tabletop
c : an abrasion (as of the skin) having the appearance of a burn rope burns
d : a burning sensation the burn of iodine on a cut
2 : the firing of a rocket engine in flight
3 : anger especially : increasing fury —used chiefly in the phrase slow burn
4 slang : a cutting remark intended to embarrass or humiliate someone —used chiefly in the phrase sick burn But plenty of us peasants know the feeling: We have stared down an unraveling romantic relationship and wanted desperately to spew one more sick burn or two about a now-former partner.— Alana MasseyDuring a lecture on conservatism at an Ivy League university, a 65-year-old guest speaker delivered a sick burn to the president of the United States.— Amanda Arnold

Other Words from burn

Examples of burn in a Sentence

Verb A flame is kept constantly burning at the monument. A small fire burned brightly in the fireplace. There was a little stove burning in the front room. I could smell smoke and knew that something was burning. Be sure not to leave any candles burning when you go to bed. I burned the letter when I had finished reading it. The new town law makes it illegal to burn trash. The wildfire has burned acres of forest. Parts of the house were badly burned in the fire. a material that burns easily See More

First Known Use of burn

before the 12th century, in the meaning defined at intransitive sense 2c

History and Etymology for burn

Our Reviews team has selected the best gas ranges.

The first known use of burn was before the 12th century 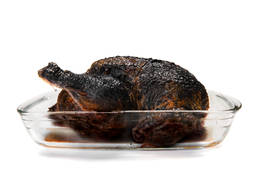 Is 'burnt' acceptable as the past tense...

Is 'burnt' acceptable as the past tense of 'burn'?

Don't let either one burn you up

1 : to be on fire or to set on fire a candle burning
2 : to destroy or be destroyed by fire or heat The building burned to the ground.
3 : to make or produce by fire or heat Sparks burned a hole in my shirt.
4 : to give light lanterns burning
5 : to injure or affect by or as if by fire or heat I burned my finger. The hot peppers burned my throat.
6 : to ruin by cooking too long or with too much heat
7 : to feel or cause to feel as if on fire burning with fever
8 : to feel a strong emotion burn with anger
9 : to record music or data on a computer disk burn a CD
10 : to get a sunburn

Kids Definition of burn (Entry 2 of 2)

: an injury produced by burning or by something rubbing away the skin a rope burn

1 : to produce or undergo discomfort or pain iodine burns so ears burning from the cold
2 : to become reddened or irritated by or as if by exposure to sun or wind she burns easily

1 : to injure or damage by exposure to fire, heat, or radiation burned his hand
2 : to break down and use as a source of energy burn calories during exercise

Medical Definition of burn (Entry 2 of 2)

1 : bodily injury resulting from exposure to heat, caustics, electricity, or some radiations, marked by varying degrees of skin destruction and hyperemia often with the formation of watery blisters and in severe cases by charring of the tissues, and classified according to the extent and degree of the injury — see first-degree burn, second-degree burn, third-degree burn
2 : an abrasion having the appearance of a burn friction burns cold burn
3 : a burning sensation the burn of iodine applied to a cut

More from Merriam-Webster on burn