Its meaning has broadened but not decayed

One of the arguments frequently made in favor of restricting some new meaning of a word is that semantic broadening will inevitably corrupt the initial meaning, rendering the word so unspecific as to make it make it meaningless. While it is true that we often see words lose the meanings they first had (we rarely use the word bully to mean “sweetheart” anymore), this does not mean that the word loses its meaning, just that it changes it. And many words manage to retain multiple specific meanings at once. Even medical and scientific words, which tend to have very specific meanings, such as radioactive. 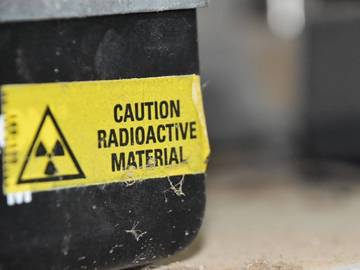 The figurative use of the word now typically carries the meaning of “so divisive or controversial as to require avoidance.”

For a word that came into our language relatively recently (just over a century ago) radioactive has managed to enjoy a significant amount of semantic change. The first meaning, beginning at the end of the 19th century, was “of, caused by, or exhibiting radioactivity.” (Radioactivity is defined as “the property possessed by some elements (such as uranium) or isotopes (such as carbon 14) of spontaneously emitting energetic particles (such as electrons or alpha particles) by the disintegration of their atomic nuclei”).

Two of us has shown that, by purely chemical processes, a strongly radio-active substance can be extracted from pitchblende.
— M. P. Curie, MME. P, Curie, and M. G. Belmont, Scientific American, 28 Jan. 1899

Although radioactive came to our language from the International Scientific Vocabulary, and was used by scientists in a very science-like manner, it managed to add a figurative meaning and enter into the general vocabulary almost immediately.

He is the man not only to conceive but to carry out great plans, and his spark of enthusiasm is almost radioactive in its power of kindling enthusiasm in others.
— The Musical Times (London, New York), 1 Jun. 1911

Pioneer stock furnished the original metal. American environment forged it. Parental discipline shaped it. And individual will tempered it and energized it to almost radioactive potency.
— The Evening Sun (Baltimore, MD), 4 Oct. 1919

And then the third time I saw him it was at last his perpendicular presence—the normal Charley Barrett, the almost radioactive Charley who used to run, kick, pass, fight and win for old Cornell.
— The Ithaca Journal (Ithaca, NY), 2 May 1924

The figurative meaning attached to radioactive in the early 20th century was different than the one we use for the word today; the above examples show radioactive used in the sense of “extremely intense.” The figurative use of the word now typically carries the meaning of “so divisive or controversial as to require avoidance”; it seems possible that our understanding of the deleterious effects of exposure to radioactive material caused this shift in meaning.

Instead, McClellan made himself radioactive with Republicans. Some in the GOP might have agreed publicly with his perceptions once President Bush returned to Crawford to resume clearing brush. Few, if any, can afford to come to his defense now.
— Richard S. Levick, PRWeek (New York, NY), 9 Jun. 2008

Sanchez has lived a charmed life but he really might have made himself radioactive this time. Is there anyone who sees any way Sanchez gets another job in TV news?
— Tom Jicha, South Florida Sun-Sentinel, (Fort Lauderdale, FL), 5 Oct. 2010

Busch, however, has rendered himself radioactive in many NASCAR circles with a number of anger-fueled outbursts and clashes with other drivers.
— Jason Shoot, McClatchy-Tribune Business News, 14 Dec. 2011

In current use the “divisive” sense of radioactive is far more common than the “potent” one, but both of these figurative meanings could co-exist with the technical sense of the word without people confusing them. When reading about the origins of Spider-Man, in which Peter Parker is bit by a radioactive spider, we need not stop and ponderingly work out which of the possible meanings of radioactive was intended.

Similarly, there are a number of other words from the realms of science and medicine which have undergone similar transitions. Febrile once simply meant “marked or caused by fever,” and now is used in the same manner as the figurative sense of feverish.

To begin with, Spider has a febrile imagination: dreams, illusions, hallucinations and other possible realities hurtle through his mind, leaving both him and the reader breathless and disoriented.
— Arshia Sattar, India Today (New Delhi, Ind.), 15 Apr. 2019

We often hear of enthusiasm, grins, or laughter being infectious, although that word once simply meant “producing or capable of producing disease.” And while contagious once mean only “transmissible by direct or indirect contact with an infected person,” it now co-exists peacefully with such meanings as “exciting similar emotions or conduct in others.”

BOY WILLIE is thirty years old. He has an infectious grin and a boyishness that is apt for his name. He is brash and impulsive, talkative and somewhat crude in speech and manner.
— August Wilson, The Piano Lesson, 1987

Meantime insincerity is contagious. One falsehood draws on another.
— Thomas De Quincey, The Poetry of Pope, 1848

It seems unlikely that radioactive will continue to pile on additional meanings, growing into a sort of polysemous monster along the lines of put, run, or set (each of which may have dozens, even hundreds, of possible meanings). Unless it gets bit by a spider of some sort, and then all bets are off.