Figurative language refers to words or phrases that are meaningful, but not literally true. If you say “that news hit me like a ton of bricks,” you are using figurative language; listeners understand the news you got was deeply moving, and also know that you were not actually hit by 2000 pounds of bricks (because if you had been you would be dead). Similarly, if you say “he begged me to reconsider, but I had a heart of stone, and I refused,” you are also using figurative language; listeners understand that you are describing yourself as inflexible or unforgiving, and know that your heart is not actually made of stone (because if it were you would be dead). 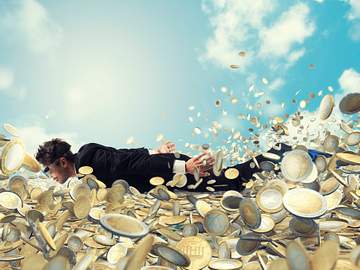 This fellow is literally swimming in money

There are many ways to use figurative language. Here are some of the more common types, and examples of their use.

An idiom is an expression that cannot be understood from the meanings of its separate words but that has a separate meaning of its own. Many (although not all) idioms are examples of figurative language.

He was up in the air about whether to go to the concert. (He was undecided, and was not suspended above the ground)

The senator was renowned for throwing his colleagues under the bus in election season. (He was known for blaming others in order to gain an advantage, and was not actually pushing anyone under a moving vehicle)

Metaphors and similes are another category of figurative language use. A metaphor substitutes a word or phrase with one that makes an analogy or explanation with an image.

My desk had a mountain of paperwork on it. (There was no actual mountain, just a large amount of paper)

My aunt is a walking encyclopedia, and everyone wanted her on their team on game night. (The aunt is a person with considerable knowledge, but is not actually a multi-volume set of books with legs)

He sat quietly, letting her words soak in. (This person is taking in information, but they are not actually soaking wet while doing so)

Figurative use of language also takes the form of extreme exaggeration, or hyperbole. This very often expresses an impossibility or near impossibility:

She literally was swimming in money. (The person described did not actually swim through a pool of currency, but merely had a lot of money)

Tickets sold out at light speed. (The tickets sold very quickly; they did not move at 299,792,458 meters per second)

The show went on forever. (The show lasted for a very long time)

Finally, if we give our words qualities or abilities that people have but that the things we are describing can’t logically possess, the result is a different kind of figurative language called personification.

We saw lights dance in the distance. (The lights are twinkling, but are not actually performing a waltz)

The wind was howling all night. (The wind was making a noise, but was not using its vocal cords to cry out in grief)

The words jumped off the page. (The words made a strong and immediate impression on the reader, but they remained in place on the page on which they had been printed)

Using figurative language allows a writer to be both playful and to communicate information effectively to readers. It provides tools for a writer to paint a picture with words (the words are bringing images to the reader’s mind; we do not have groups of letters banding together and wielding paintbrushes and paint).