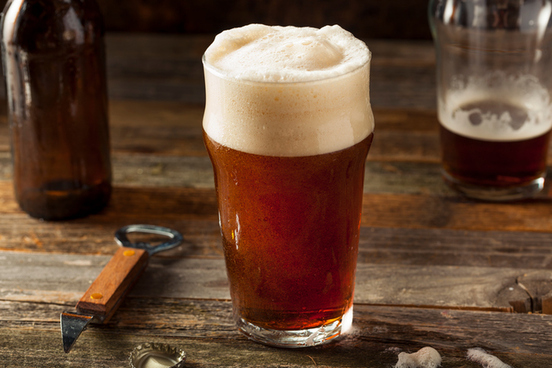 Ale is a word that is as old as English itself, dating to the 12th century. It’s distinguished from lager by usually being top-fermented, meaning that the yeast rises to the surface when fermentation is completed. Also unlike lager, ale’s fermentation is usually warm and rapid rather than cool and slow.

Unsurprisingly for a word that is this old, ale has had a fuzzy (not to say fizzy) history of specific meanings. The Oxford English Dictionary records that ale probably initially referred to any alcoholic beverage brewed from malt, and that over time it successively referred to beer brewed without hops, then to any strong beer, and then to beer brewed with malt that had not been roasted.

A liquor made from an infusion of malt by fermentation. It differs from beer, in having a smaller proportion of hops. It is of different sorts, chiefly pale and brown; the first made from malt slightly dried; the second, from malt more considerably dried or roasted. Ale was the common drink of the ancient inhabitants of Europe. It is usually made with barley; but sometimes with wheat, rye, millet, oats, etc.

If all this sounds confusing, a simple solution may be to follow the definition of ale from the Oxford English Dictionary: “any beer other than lager, stout, or porter.”

Another meaning of ale is “an English country festival at which ale is the principal beverage.” Here’s an example of its use from Ben Jonson’s play A Tale of a Tub from 1633:

And their authorities at wakes and ales, With country precedents and old wives’ tales, We bring you now, to show what different things The cotes of clowns are from the courts of kings. 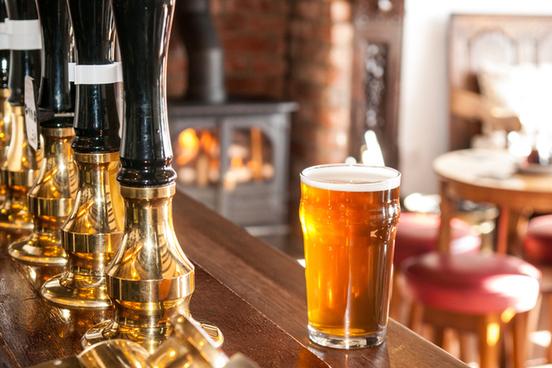 The very dry and heavily hopped ale usually served on draft in British pubs is called bitter. Bitter is a pale ale and the more pronounced taste of hops distinguishes it from more mild ales—hence the name. Less astringent brews could be ordered as a mild, used as a noun in British English meaning “mild ale or beer.”

In the mid-19th century, an idiom in British English for drinking beer was “to do bitters.”

The word bitter traces back to the Old English verb bītan, “to bite.”

Bitter as a kind of ale is not to be confused with bitters, the aromatic distilled liquor used in mixed drinks. 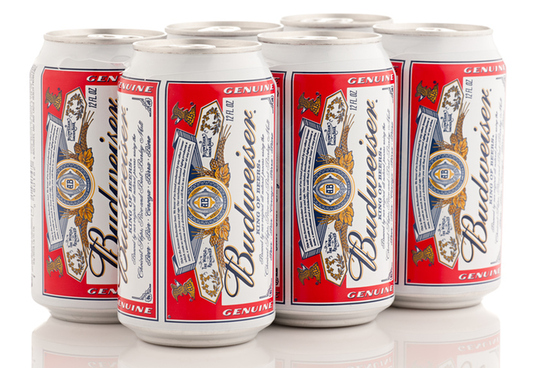 Lager is the most popular beer in America, which means that there are a whole lot of cans, bottles, and kegs of it on shelves, in freezers, and in trucks at all times. This storage keeps the beverage true to its name, since lager beer (as it was originally known) is a calque, or loan translation, of the German term Lagerbier, and lager means “storehouse” (from the German verb lagern, “to store”). Lager is a relatively recent variety of beer, first made in Bavaria around 1600. Researchers have determined that the yeast used for lager originated in Patagonia, which explains why this type of beer dates to the period following early exploration and trade between Europe and the Americas.

The term only dates to the mid-19th century in English, possibly because of the longer tradition of drinking ale in Britain.

Lager is usually bottom-fermented, meaning that the yeast falls to the bottom when fermentation is completed, and is usually light in color with high carbonation and a medium hop flavor. Most significantly, from the point of view of its name, it that is stored in cool temperatures for several months for maturing—the slow fermentation that is one of the differences between lager and ale.

Lager also became a verb in English, meaning “to store (beer) during a period of aging often accompanied by a secondary fermentation,” a word that is today likely only used by brewers. 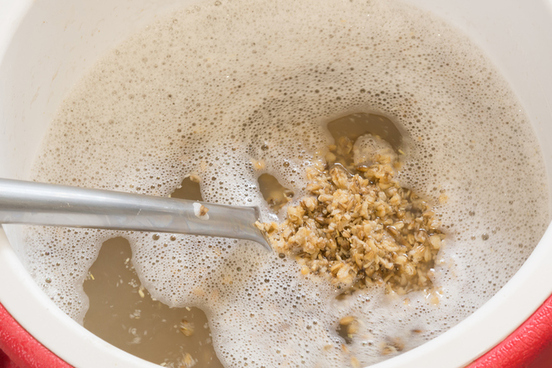 Steps along the way

Beer is made from grain that is converted to sugar and fermented with yeast in the brewing process. The most usual grain used for making beer is malted barley; malting a grain means soaking it in water until the germination process begins and the individual grains begin to sprout, at which point the grain is dried, and the resulting softened grain ready for brewing is called malt.

The malt is rolled and cracked before being mixed in water and heated, and the result is called mash. This steeping in hot water activates the grain’s enzymes, converting starches to sugars that can subsequently be fermented. The sweet liquid that is then drained from the mash and ready for fermentation is called wort. The word wort comes from the Old English wyrt meaning “root,” “herb,” or “plant” (as in Saint-John’s-Wort), and is related to the Middle High German word würze, meaning both “brewer’s wort” and “spice.”

The wort is then boiled to sanitize the mixture, and other ingredients are added at this point (such as hops. Some of the hazy grain debris called trub produced by reduction from boiling is removed before fermentation. Yeast is added to begin fermentation, and the wort in the process of fermentation is called gyle. Gyle is also used to mean “the beer produced at one brewing,” or a batch. 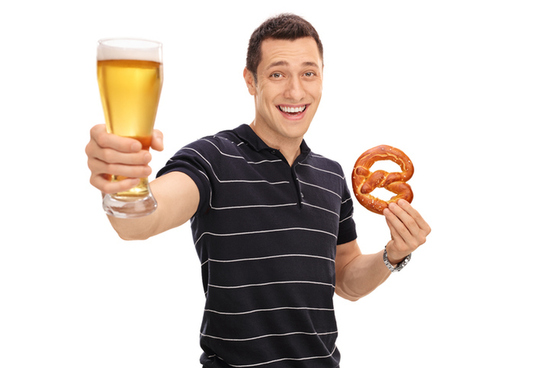 Pilsner is a pale lager. Lager is the style of beer initially made in Bavaria, and the kind of beermaking practiced there spread to neighboring Bohemia. The names of both regions derive from Boii (pronounced \BOY-eye), the Celtic tribe that settled the region in Roman times. Pilsner gets its name from the city of Pilsen, located in what is today the Czech Republic (it is called Plzeň in Czech). 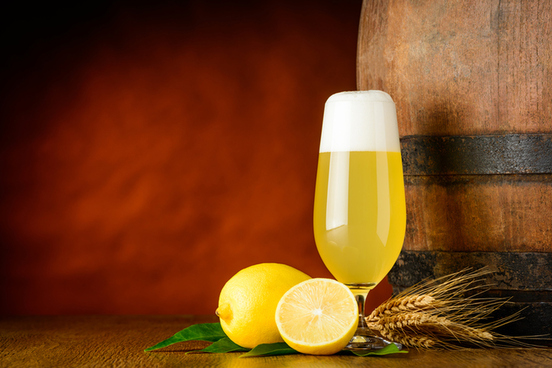 Shandy is the sweet drink made by mixing beer with ginger beer or what the British call lemonade or lemon soda (think Sprite or 7-Up). Shandy is a shortened form of shandygaff, a word that traces back to the middle of the 19th century. It’s clear that it was appreciated for being both refreshing and having a reduced amount of alcohol per serving. An early mention of the beverage comes from a periodical edited by Charles Dickens called All the Year Round from 1860:

In such a thermometrical state, no honest man drinks anything but shandy-graff.

(Presumably thermometrical refers to a hot temperature, a usage that didn’t catch on as well as did shandy.)

If there’s any connection between shandy and Tristram Shandy, the experimental novel by Laurence Stern from 1767, perhaps by association with a book that broke all the rules or represented a somehow unserious principal character, it has yet to be established.

Stout is the shortened form of stout beer (just as lager is a shortened form of lager beer). Porter is defined as “a heavy dark brown beer brewed from browned or charred malt.” The two types of dark beers have an intertwined history, since stout was ultimately used to modify porter specifically, and thereafter became most closely associated with dark beer or ale.

Initially, stout referred to the alcoholic content rather than the color of the beer; the word derives from the adjective stout, which came to English from the Old French word estout meaning “bold” and “powerful.” Its first uses in English—now archaic—meant “fierce, menacing” or “arrogant, haughty.”

Arthur Guinness, the founder of the brewery that makes the world’s most popular stout, began his operation near Dublin in 1755, the same year that Samuel Johnson published his famous dictionary. Johnson’s entry for stout reads:

A cant name for strong beer.

This original meaning of “strong beer” had its opposite in a term that survives in English, but is used today mostly in its figurative sense of “something of small importance,” since weak beer has been called small beer since the 15th century. 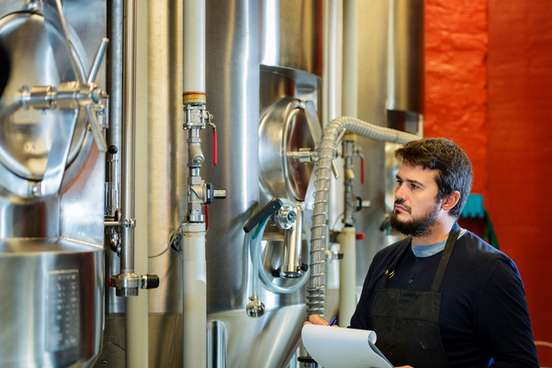 Zymurgy is the seventh-to-last entry in our Unabridged dictionary. It is defined as “a branch of applied chemistry that deals with fermentation processes (as in wine making or brewing),” and is used as a fancy word for the profession, hobby, or fellowship of brewing beer. There are zymurgy clubs around America, a brew pub called Zymurgy in Torrance, CA, and even a magazine called Zymurgy. It’s one of those fancy words for something that people didn’t know had a fancy word for it, and is nearly always cited with its definition, meaning that it is used in the sort of in-the-know contexts where specialists and aficionados find each other.

The term is formed in New Latin (the Latin names used in science that are often quite modern coinages) from the Greek root zymē (“enzyme”) and -urgy (“technique or art of dealing or working with (such) a product, matter, or tool,” like metallurgy). It dates back to the mid-1800s.

H.L. Mencken, writing in The New Yorker in 1949, had some fun with plausible but unattested derivatives of zymurgy:

Perhaps the nobbiest of all is zymurgeon, to designate one who serves humanity by working in a brewery.

My own choice is zymurgeon, though I am still willing to hear argument in favor of zymotechnician, and even zymor, zymologist, zymiast, zymician, and zymurgic engineer. When a brewmaster, fearing the return of prohibition, takes a header into one of his vats and is not found until next morning, he is obviously a zymocide.

Another entry seems roughly synonymous: zymology is defined similarly, as “a science that deals with fermentation.” This word dates back to the mid-1700s, and a variant is even included in Noah Webster’s American Dictionary from 1828:

ZUMOLOGY, noun [Gr., ferment; to ferment; discourse.] A treatise on the fermentation of liquors, or the doctrine of fermentation

These words haven’t caught on in general use, and have been criticized in the past: a writer for Bacteriological Review in 1947 was sniffy:

The yeasts have for the great part been studied either by bacteriologists or by specialists recently designated by the more or less unnecessary term, zymologists.

A science editor at Merriam-Webster wrote a note about zymurgy in 1899:

I am not familiar with the use of this word. I should question its value.

The editor was not heeded; the word remains in the dictionary.