: beer diluted with a nonalcoholic drink (such as ginger beer)

Recent Examples on the Web The name is a shortening of shandygaff, a word that according to the Merriam-Webster dictionary first appeared in the 19th century. —

Michael Agnew, Star Tribune, 2 June 2021 The shandy or shandygaff first emerged in the mid-18th century as one of the first beer cocktails. —

These example sentences are selected automatically from various online news sources to reflect current usage of the word 'shandygaff.' Views expressed in the examples do not represent the opinion of Merriam-Webster or its editors. Send us feedback.

1853, in the meaning defined above 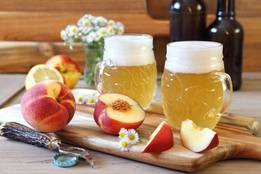 An Undiluted History Of 'Shandy'