'Recur' and 'Reoccur': A Subtle Difference

Both words mean "to happen again," but one suggests frequent or periodic repetition

Both recur and reoccur, which can both mean "to happen again," are derived from similar Latin roots that literally translate to "to run again." While they are both very similar in origin, the usage of "recur" usually implies a periodic or frequent repetition, whereas "reoccur" does not have the same implication. Something that "reoccurs" may only happen again once.

In any pair of very similar words, an extra syllable in one of them is almost certain to draw criticism: think of converse and conversate, preventive and preventative, whoever and whosoever. But sometimes, subtle shades of meaning between very similar words can be discerned, and greater precision comes from knowing the difference.

Such is the case with recur and reoccur. 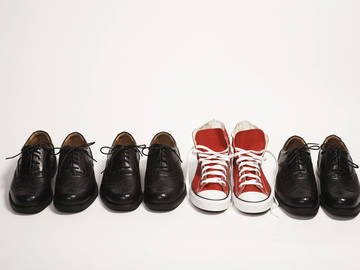 Origins of Recur and Reoccur (and Occur)

These two words share similar etymologies as well as similar meanings; their ultimate root is the Latin verb currere meaning “to run,” making their literal meanings “to run again.” Recur is the older word in English, first appearing in the early 1500s and derived straight from the Classical Latin recurrere. Similarly, Latin’s occurrere means “to run against” or “to run into” (meaning “to encounter”), and it came to English as occur in the late 1400s. Reoccur was formed by English speakers who combined familiar Latin parts in the 1700s.

The similar word concur etymologically means “to run together” or “to run with.” Recourse came through French on its way to English, and, like recur, derives from recurrere.

Both recur and reoccur can mean simply “to happen or appear again,” and this is the way that reoccur is most often used. Recur can suggest a periodic or frequent repetition in addition to having the same basic meaning as reoccur:

This recipe for disaster recurs throughout history, and the only way to stop it is for everyone to learn about the unsuccessful attempts at revolution, so as not to repeat those mistakes in their current struggles.
—Jacob Blumenfeld, The New York Times, 29 May 2017

Narrow in scope, they generally target groups of a few hundred to a thousand individuals with sums that fall between a few hundred and a few thousand dollars. Some are one-time lump sums, and others recur monthly for a time.
—Charlie Wood Staff, The Christian Science Monitor, 1 March 2017

That sense of responsibility is typical of most City Ballet corps dancers. It is a notion that recurs frequently in Mr. Savoye's talk of his life in the company.
—Jennifer Dunning, The New York Times, 28 April 1996

Castillo was removed from the game after the third because of a muscle pull on the right side of his neck. Twins trainer Dick Martin said it was a reoccurrence of a previous injury.
—Tom Yantz, Hartford Courant, 20 May 1983

Here, reoccurrence simply means that the muscle pull had happened before; if recurrence had been used, it could have suggested that the player had had the same injury more than once before. This does not quite mean that reoccurrence can only mean one repetition; rather, reoccurrence tends to imply nothing about repetition, whereas recurrence is likely to. Even though these words sound alike and trace back to the same roots, we should also recognize that the habits of usage have taken their course.