What does 'soever' mean, anyway?

And when did you last use 'whomsoever'?

Pity the -soever words. The ebb and flow of linguistic fashion has turned against most of them, like the fins on a 50s Chevrolet. Or, perhaps more accurately: like the fancy round collars called ruffs worn in the early 1600s, the moment in time when such words were at their most popular. It’s clear that trimming the language of unnecessary words is one sign of mature writing; we all know that style guides emphasize clarity and directness. Wasted words, like wasted syllables, make for bloated prose. Needless syllables are easy to drop. 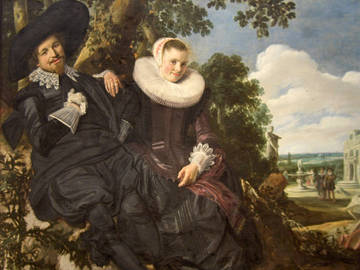 Words ending in '-soever' are like the enormous ruffs popular in the early 1600s: they're impressive, but will almost always seem formal or anachronistic.

But, back when fancy-sounding rhetorical flourish held a greater degree of prestige than it does today—a time, it may be noted, that predates both near-universal literacy and the proliferation of style guides and dictionaries—longer words may have sounded impressive and served a purpose.

It all started with soever, a compound of the adverbs so and ever that dates to Old English in the 12th century. Together they mean “to any possible or known extent” and sound distinctly old-fashioned:

But another meaning of soever caught on: “of any or every kind that may be specified”:

Sir Thomas Malory used it in the 1400s in his setting of the Arthurian legends, Le Morte d’Arthur:

What cause soever ye had, said Arthur

This use became an intensifier used as a suffix meaning “any out of all possible or conceivable” when added to the interrogative words who, what, where, when, and how. The extra syllables can sometimes add rhetorical emphasis in addition to specific meaning, as they do for words like utmost and superannuated.

The two oldest of these compounds are familiar ones: whosoever and whatsoever, both dating to the 13th century. Howsoever followed in the 14th century. These words have triple forms that show little difference in meaning, indicating that emphasis is one of the main reasons that -soever was added:

Whosoever was used in the King James Bible:

And whosoever liveth and believeth in me shall never die.

More recent translations use whoever or everyone in this sentence. Whomsoever is still in use, but usually in very formal official language or deliberately archaic writing. The standard press release issued by the UN Security Council following terrorist attacks includes this sentence:

The members of the Security Council reiterated that any acts of terrorism are criminal and unjustifiable, regardless of their motivation, wherever, whenever and by whomsoever committed.

Whomsoever was occasionally used in Merriam-Webster definitions until Webster’s Third Unabridged in 1961, at which point they had all dropped from the text of the definitions.

Whatsoever is the most common of these words in contemporary English. It was also used in the King James Bible, where it was sometimes separated (a process linguists call tmesis):

And what saddle soever he rideth upon

What thing soever I command you

And what children soever they found

This archaic-sounding separation was also occasionally done with other compounds:

how many soever they be

Howsoever is still in use, and gives writing an official or legal tone. It was sometimes extended by a single letter to howsomever, used by Shakespeare in All’s Well That Ends Well:

howsome’er their hearts are severed in religion

Whensoever has been used as both a conjunction (“whensoever you feel the need to return”) or as an adverb, a use labeled obsolete in the dictionary. It’s used this way in Hamlet:

I am constant to my purposes; they follow the King's pleasure. If his fitness speaks, mine is ready; now or whensoever, provided I be so able as now.

These words are sometimes used today by writers who are trying really hard to make convincing use of the language of another time:

Fighter of weaklings and braggarts like thyself, whensoever a true knight face thee, thou runs away.
—John Ringo, There Will Be Dragons, 2004

There’s a limit to how much the addition of letters or syllables adds to the prestige of these words, however: whensomever is labeled “now dialectal or vulgar” in the Oxford English Dictionary.

Whence means “from what place, source, or cause,” and sounds archaic in any context in contemporary English. From it were derived whencever and whencesoever, words that you might encounter in literature of centuries past.

Another word that always sounds archaic today is whither, meaning “to what place.” Whithersoever is a synonym of wheresoever. Whitherto is considered obsolete, but, sure enough -soever was attached to form whithertosoever. (In dictionaries, archaic refers to words that are still encountered but always sound old-fashioned, like thee and thou, whereas obsolete words have not been used for more than 250 years.) Examples of these words in use come from this passage from a religious treatise published in 1634, nearly the all-time peak of use for -soever words:

And surely that which Gregory affirmes of the Angells truely; That they runne as it were within God and in God, whithertosoever they are sent, may also be truely affirmed of the glorified Saints, wheretosoever they roule, and wheresoever they abide; they abide in God and roulle in God.
—Richard Sheldon, Mans Last End, 1634

The weight of history also can weigh down good writing, so you may want to rethink your choice of words, howsomever and whensoever you use one of these words yourself.