Why not both, just to be safe?

There is no difference between preventive and preventative. They are both adjectives that mean "used to stop something bad from happening." Both words are commonly used in contexts concerning health care, as in "preventive/preventative medicine." Preventive, however, is used much more frequently than preventative.

Even though the English language is rich with variation, many of us find ourselves uncomfortable when we encounter two forms of a word which are just a touch different yet mean the same thing. If this happens with a pair of fairly obscure words (such as dialectical and dialectal) it often will not draw much notice. (Except on Twitter.) But when the words veer closer to common use and attract attention we often find that one of them will be condemned. As is the case with preventive and preventative. 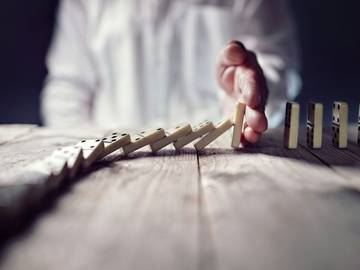 The words co-existed for 200 years before complaints on 'preventative' began in the late 18th century.

The shorter word, preventive, has meanings such as "something that prevents," when used as a noun, and "devoted to or concerned with prevention," when used as an adjective. Preventative means the same thing. The question of which one you should choose depends much on your appetite for nit-pickery.

History of Preventative and Preventive

Of the two, preventive is slightly older, appearing in English at the beginning of the 17th century.

So Philip of Macedon, and Atis the sonne of Croesus, found a chariot in a swords hilt, and an Iron poynted weapon at the hunting of a Bore, to delude their preuentiue wearinesse.
— Richard Carew, The Survey of Cornwall, 1602

The warre which wee call preuentiue ought to bee esteemed the more fitte, for that the multitude of souldiers which the Turke carrieth alwayes with him to maintaine his owne designes, and to frustrate our purposes, is infinite.
— Louis Turquet de Mayerne (trans. by Edward Grimeston), The Generall Historie of Spaine, 1612

However, preventative is no Johnny-come-lately, showing definite use for over 350 years now.

Here follows the preventative: take a poor man, and settle him in a comfortable situation, making him pay (or secure) a reasonable valuation....
— Christopher Love, The Strange and Wonderful Predictions of Mr. Christopher Love, 1651

It openeth all obstructions, and suppresseth all manner of over-flowings in Women, strengtheneth the womb, cureth the mother, maketh the barren fruitfull, and is a great preventative against miscarryings, and rectifies most infirmities of the womb.
— John French, The York-shire Spaw, 1654

To commit the sin, and not to prevent the sin, when men have the preventative power of it, are very near ally'd, if not the same Crimes.
— Roger Boyle Orrery, The Answer of a Person of Quality to a Scandalous Letter Lately Printed and Subscribed by P.W., 1662

Preventive has always been more common than preventative (although the difference between the two words is more pronounced in some forms of English, such as the American varietal, than others). But for almost two hundred years the two words existed in peace, and no one seemed to mind much which one you used. It is not uncommon to find both them used interchangeably by a single author within the same work.

...and sent for a neighbouring Apothecary to give him something preventive, for he had not yet found himself ill.

...to send a preventative Medicine to the Father of the Child, to whom he had told their Condition.
— Daniel Defoe, The History of the Great Plague in London, 1754

But the English language is not only rich with variation; it is rich as well with strife, and people who like to tell you that the thing you're doing is a bad thing to do. And so, after over a century of peaceful coexistence, someone decided that one of these words was a bit off. We don't know who the first person to complain about preventative was, but individuals began weighing in on this at the end of the 18th century. By the middle of the 19th century the idea that the extra syllable in preventative was unseemly had made it into dictionaries and usage guides.

John Russell Bartlett, in his 1848 A Dictionary of Americanisms, sniffed that preventative was "A corruption sometimes met with for preventive both in England and America." He was followed by Matthew Harrison, who in his 1861 The Rise, Progress, and Present Structure of the English Language stated that preventative was nothing more than preventive "written and spoken improperly." This was followed by another hundred or years of language guides claiming that one of these words was proper and one was not.

In recent decades there has been some softening in the opposition to preventative. Some guides will allow that it is not a mistake, but advise using preventive for greater clarity. We advise you to use the word which speaks to your heart. Or emulate Daniel Defoe, and use both.