See which foods came from "finger", "pants", and "bacteria"

'Baguette' Is Related to 'Bacteria' 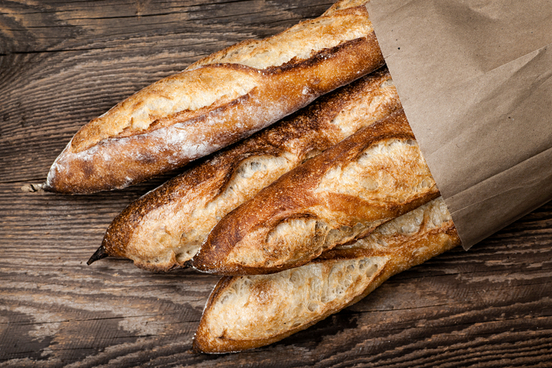 The word baguette has a diverse work history, so to speak, in the English language. It is a French borrowing that means "rod" in its native language and was originally used in the early 18th century as the name for an architectural molding. In time, musicians recruited the word as a name for a drumstick, a bandleader's wand, and the wooden part of a violin bow. Then in the early 20th century baguette started a new career in gemology where it was employed as a name for a gem having the shape of a narrow rectangle. Not long after, baguette was established in the baking industry as the name for a long, thin loaf of French bread. What seems to have been overlooked when given that role, however, is the word's connection to Latin baculum, meaning "staff," which is the parent of bacillus, a genus of bacteria and a synonym of bacterium.

'Taco' Once Referred to an Explosive 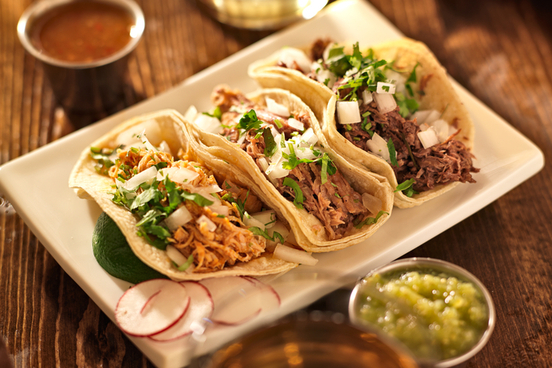 In Spanish taco can refer to a stopper, a plug, a billiard cue, a cleat, a shoe heel, and, yes, a taco. Etymologists see some similarity to the Spanish word's pointy non-culinary uses in the English word tack, meaning "nail," but the origin of the food sense remains obscure.

There are, however, a couple of interesting theories to chew on about the culinary taco. One theory is centered on the word's "plug" meaning. Supposedly 18th-century Mexican miners made explosive "tacos" (plugs) consisting of gunpowder wrapped in paper. Although there may be some truth to the Mexican food wraps being linked to bodily explosions, there is no linguistic or historical evidence indicating that the gunpowder-filled taco influenced the meat-filled taco beyond the word's use for a filled wrap. And why would someone name a food after an explosive anyway?

Another theory—fed by the placement of ingredients in the middle of the taco's tortilla—suggests that taco derives from the Nahuatl word tlahco, meaning "half" or "in the middle." Again, no convincing etymological evidence has been served up, which leaves the origin of the food sense of taco under wraps. 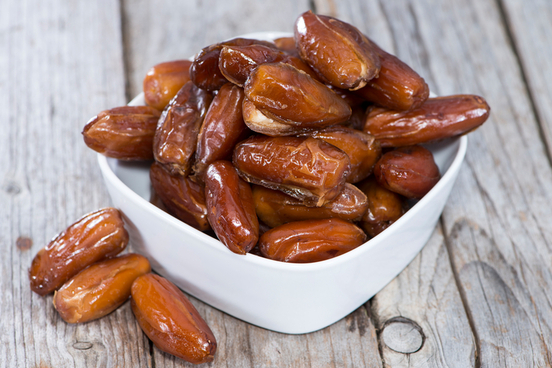 The date that is the fruit of the date palm is unrelated to the temporal date, which is descended from Latin dare, meaning "to give." The fruit's name is descended from Greek daktylos, whose primary meaning is "finger." The reason for this extension of meaning to the fruit is debated. Some suggest that the pinnately divided leaves of the date palm look like fingers and that this fact gave the fruit its name. This account would be more convincing if the tree, rather than its fruit, had been named daktylos. It is more likely that the clustered dates themselves were felt to resemble fingers.

It has also been suggested that Greek daktylos, "date," is not the same word as daktylos, "finger," but rather an alteration of some Semitic word. Such words for the date palm as Arabic daqal and Aramaic diqlā are quoted in support of this theory. 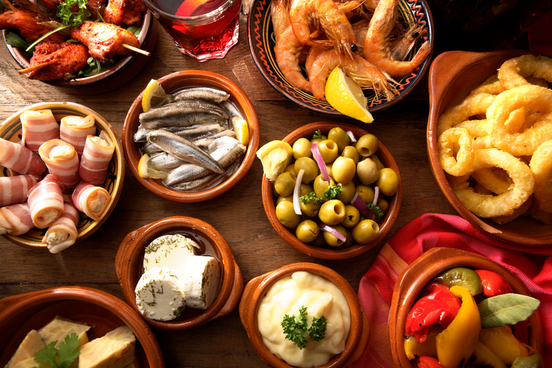 Whatever the origin of the name, it is now enjoyed with a drink worldwide.

RELATED: A Few Words on 'Toast' 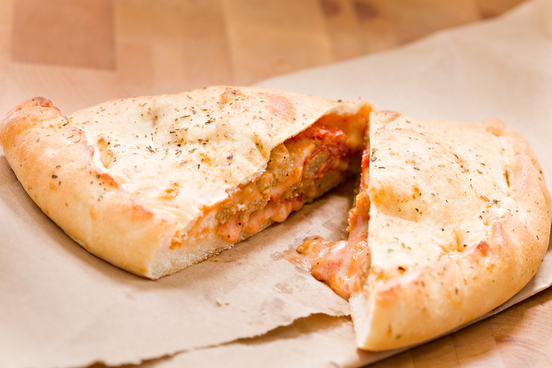 Looking at the etymology of calzone, it seems the half-moon stuffed pocket of pizza dough should be placed in a wardrobe, not an oven. Its Italian name is the singular form of calzoni, meaning "pants," which is related to the Italian word for "stocking," calza. That word, in turn, is a descendant of Latin calceus, meaning "shoe."

Since there is no hint of dough or pizza toppings in the history of calzone, it is believed that the word was chosen as a name simply because of the food's shape, which some view as resembling a pair of folded pants. One foodie, however, cooked up another idea. Perhaps the word for "pants" was selected because the food's closed form allows it to be carried about and eaten without utensils. The calzone as a "walk-around pizza" is a great concept, but the association of pants to a food that can be conveniently carried and eaten seems half-baked.

A Main Ingredient in 'Omelet' Is a Word for a Plate 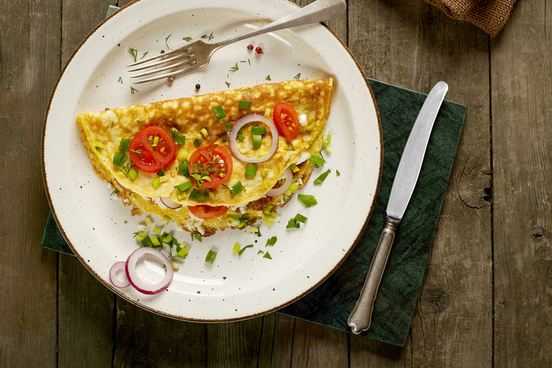 Although the word omelet bears little resemblance to the Latin word lamina, the shape of an omelet does resemble a thin plate, which is what lamina, the source of omelet, means. The orthographic dissimilarity between the two words is due to the various alterations that took place in both Latin and French.

The Romans used the noun lamella, the diminutive form of lamina, to mean "a small metal plate." This diminutive became, in Old French, lemelle, meaning "blade of a sword or knife." By misdivision—similar to that which produced apron from an earlier napron—la lemelle, "the blade," was misinterpreted as l'alemelle, which accounts for the appearance of the initial vowel in omelet. In Middle French the word alemelle became alumelle and then was altered to alumette, having been influenced by the common suffix -ette. It also acquired the additional meaning "eggs beaten and cooked without stiring until set," since such a dish resembled a thin plate or blade. In turn, alumette was altered to amelette, and finally altered again to omelette, the form used in Modern French. The word, now usually written omelet, has been used in English since the 17th century, when an omelet was described as "a pancake of egges."

MORE TO EXPLORE: Yes, You Can Unboil an Egg 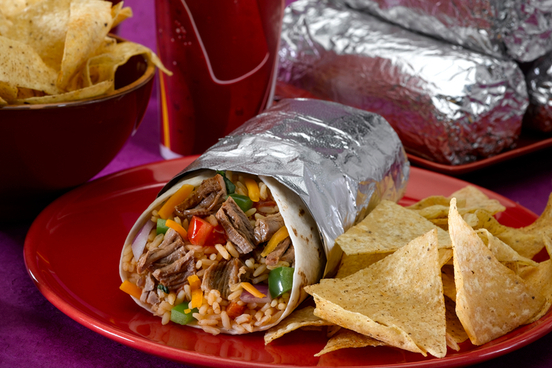 The word burrito is a diminutive form of Spanish burro, meaning "little donkey." Unfortunately, no one is sure exactly how the food got to be named after the pack animal. Some speculate that the connection may lie in the resemblance of a stuffed tortilla to the bedrolls and bundles often carried by the animal. It has also been suggested that a burrito looks a bit like a donkey's ear, but even if so, why use the donkey as an eponym for the food?

As might be expected, there is a legend about the peculiar naming of a food after the donkey. During the time of the Mexican Revolution (1910-20), supposedly there was a food vendor by the name of Juan Mendez who used a donkey to carry his food. To keep the food warm, he would wrap it up in flour tortillas. People looking for Mendez's tasty offerings would say that they were looking for the "burrito," or rather the donkey with the food.

The legend certainly connects the donkey to the burrito, but the story lacks documented evidence. However the food got its name, a simple mix of meat, beans, and cheese has become a culinary phenomenon.

The Pretzel Is a Pair of Folded Arms 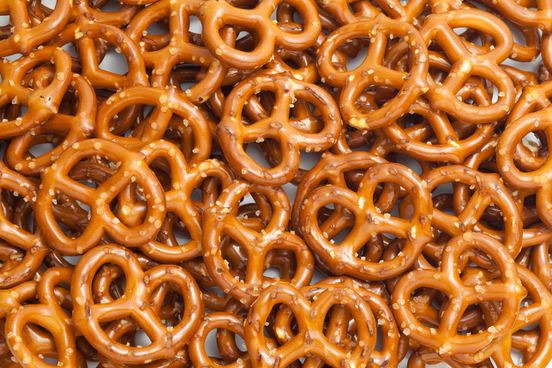 The pretzel was most likely introduced into the United States during the 19th century by German immigrants. Its name is derived from German Brezel. The familiar knot-shaped pretzel has been around, at least in Germanic countries, for centuries, as is evidenced by its appearance in a painting of The Fight between Carnival and Lent by the 16th-century Flemish artist Pieter Brueghel, the Elder. The origins of the pretzel, however, are certainly a good deal earlier, for the Old High German form brezitella is closely related to Italian bracciatello, "ring-shaped bun." We may assume with some confidence, therefore, the existence of a common Medieval Latin source brachiatellum, from Latin brachiatus, "having branches like arms." Apparently the pretzel is so called because of the similarity between its knot shape and a pair of folded arms.

'Hash' Is Related to 'Hatchet' 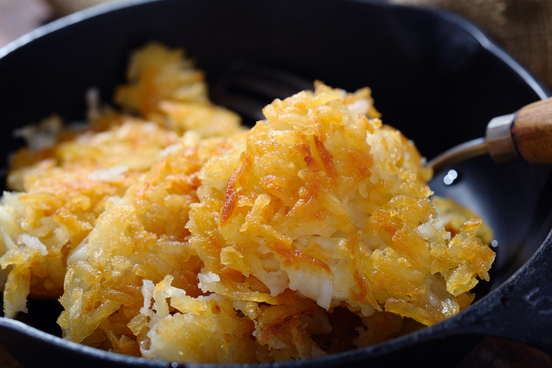 Hash browns is short for hashed brown potatoes. The dish consists mainly of boiled potatoes that have been diced and then fried until browned. Hash and the cutting tool hatchet are first cousins: both words can be traced back to the French word for a battle-ax, hache. The English verb hash, meaning "to chop"—which is what you do to make hash browns—is based on the French verb hacher with the same meaning. English speakers have been hashing and eating food since the 17th century.

'Gnocchi' Is Related to Names for Hard Objects 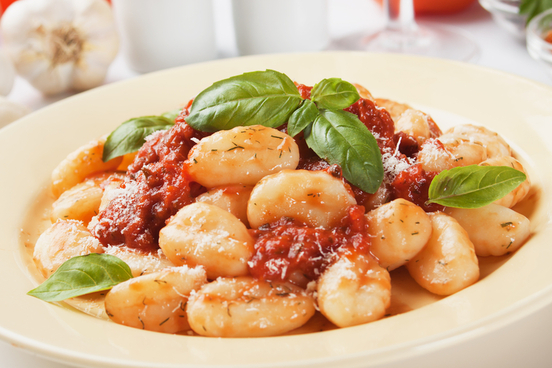 Gnocchi are small dumplings made with potato or semolina. The name is the plural form of Italian gnocco, which can refer to a lump as well as a dumpling. That word came about as an alteration of nocchio, meaning "knot in wood," which may be related to a Germanic word akin to knuckle. All these etymological sources allude to the small, tight rounded shape of gnocchi, but they also denote hard objects, which belies the soft texture of these tasty morsels. 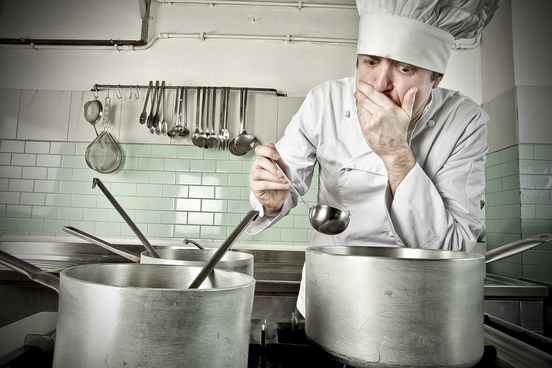 8 Words to Kill Your Appetite: 'Borborygmus', 'keck', and other words unsuitable for the dinner table