1
: attach
tack on some sequins for pizzazz
especially : to fasten or affix with tacks
tack a notice to a pole
tacking down a stairway carpet
2
: to join or add in a slight or hasty manner —usually used with on or onto
… the upbeat ending, tacked on to a book that cries out for a tragic one.

Julian Symons
3
a
: to add as a supplement or something extra —usually used with on or onto
tacked fees onto the priceThe Marlins tacked on five runs in the bottom of the eighth …

Buster Olney
b
: to add (a rider) to a parliamentary bill
provisions tacked to an appropriation bill
4
: to change the direction of (a sailing ship) when sailing close-hauled by turning the bow to the wind and shifting the sails so as to fall off on the other side at about the same angle as before

1
a
: to tack a sailing ship
We tacked repeatedly as we sailed toward the harbor.
b
of a ship : to change to an opposite tack by turning the bow to the wind
a ship that tacks easily
c
: to follow a course against the wind by a series of tacks
Boredom was the chief enemy as the ships tacked to and fro.

Nigel Calder
2
a
: to follow a zigzag course
tacked through the crowd
b
: to modify one's policy or attitude abruptly
With the coming of Ronald Reagan to power, Nixon tacked hard right—an old instinct.

1
: a small short sharp-pointed nail usually having a broad flat head
2
a
: the direction of a ship with respect to the trim of her sails
starboard tack
b
: the run of a sailing ship on one tack
c
: a change when close-hauled from the starboard to the port tack or vice versa
d
: a zigzag movement on land
e
: a course or method of action
especially : one sharply divergent from that previously followed
3
: any of various usually temporary stitches
4
: the lower forward corner of a fore-and-aft sail
5
: a sticky or adhesive quality or condition

: stable gear
especially : articles of harness (such as saddle and bridle) for use on a saddle horse

Verb She tacked a poster on the wall. A message was tacked to the board. We had to tack repeatedly as we sailed toward the harbor. 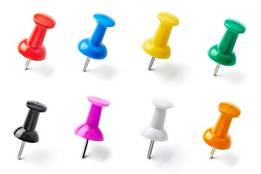 1
: to fasten or attach especially with tacks
2
: to join in a slight or hasty manner
3
: to add on in order to complete
4
a
: to change the direction of a sailing ship by shifting the sails
b
: to change from one tack to another
5
: to follow a zigzag course
tacker noun

1
: a small short sharp-pointed nail usually with a broad flat head
2
a
: the direction a ship is sailing as shown by the position the sails are set in
on the port tack
b
: a change of course from one tack to another
3
: a zigzag movement on land
4
: a course or method of action
try a new tack
5
: a slight or temporary sewing or fastening

: stable gear
especially : equipment (as a saddle and bridle) for use on a saddle horse