A Few Words on 'Toast'

Need to spice up your drink? Add a piece of toast.

The English word toast and the Spanish-derived tapas have something in common when it comes to libations. The word tapas in English refers to hors d'oeuvres served in a bar, and that meaning is derived from the Spanish noun tapa, meaning "cover" or "lid." According to one account, Spanish barkeepers began covering their customers' drinks with slices of bread (or meat) to keep dust or insects from entering. Hence, the first edible tapa was a food lid. Other stories abound, but this one brings to the table both food and drink, which the origin of toast, in the senses of toasting to someone's health or drinking a toast to someone, does as well. 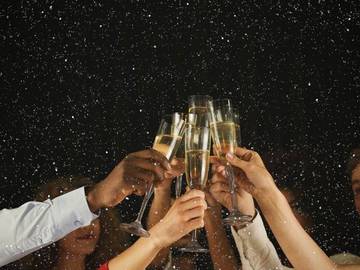 Stay tuned. We'll be talking about 'Ghostbusters' in a few paragraphs.

Toast in its "drinking" senses originates in the practice of immersing browned or charred spiced bread in a drink, and after wishes of goodwill or health or other complimentary words are said about a person or persons (for example, newlyweds) in honor or celebration, the cups of wine, ale, etc., are clinked together in recognition or acknowledgment and are then subsequently sipped, or pounded (depending on the drinker). William Shakespeare makes mention of this custom of adding toast to wine in his comedy The Merry Wives of Windsor: "Go, fetch me a quart of sack; put a toast in 't," demands the hard-drinking Sir John Falstaff of his follower Bardolph.

The common reason for adding toast to a drink was to make it more palatable with the spices on the toast, but it also supposedly lessened any bad odor. It is also said that the toast would soak up some of the bitter or acidic sediments in the wine. The bread wasn't necessarily consumed by the drinker; it was often discarded after it flavored the drink and soaked up any unwanted sediments. It usually didn't go to waste either, as this passage from Lodowick Lloyd's 1573 The Pilgrimage of Princes illustrates:

Alphonsus … tooke a toaste out of his cuppe, and cast it to the Dogge.

Etymologically, both the "food" and "drink" senses of toast are related to the Middle English verb tosten, which is derived—via Anglo-French toster—from Late Latin tostare, meaning "to roast," and Latin tostus, the past participle of torrēre, "to dry" or "to parch." Originally, toast in Middle English meant "to make thoroughly hot and dry by or as if by the action of fire or the sun." It then was used for the browning of bread, which eventually led to the senses of toast referring to the act of proposing or of drinking in honor of someone or something (as in "made a toast to the queen" or "propose a toast to a job well done") and, in the past, to the person or thing so honored:

But you'll respect the constitution handed down, etc.—and you'll rally round the throne—and the King, God bless him, and the usual toasts, eh?
— George Eliot, Felix Holt, the Radical, 1866

One story for how toast came to refer to the person in whose honor the drinking was done is related to a young woman admired for her beauty. According to the story, the young woman was bathing in the public baths when her admirer filled his cup from the water and drank in her honor (which is both gross and creepy). She was thus, metaphorically, the "toast" of the drink. This is just a story, but it is true that women were the first to be referred to as "toasts." A few decades later, any person, male or female, honored with a drink shared the epithet, and even without the drink, as in the expression "toast of the town."

The semantic development of the "drinking" senses can be regarded as the result of metonymy, which is a figure of speech that consists of using the name of one thing in place of something else for which it is associated (as in "I'm reading Rowling" as opposed to saying "I'm reading the works of J. K. Rowling," or "Capitol Hill" for the legislative branch of the United States government). Toast would have then developed by association with the act of literally raising a piece of toast in a cup in someone's honor, health, etc. Although the practice of clinking drinking vessels in honor or celebration goes back to ancient times, toast as the name for it only dates to the late 17th century.

Toast also has a distasteful sense used in slangy expressions such as "you're toast," meaning "you're as good as dead," "you're finished," "you're done for." Some readers might recall a certain line from the 1984 film Ghostbusters. Apparently in the script, the related line is "I'm gonna turn this guy into toast," but actor Bill Murray, in his role as parapsychologist Dr. Peter Venkman, ad-libbed "This chick is toast." There is earlier evidence of a similar figurative sense used with on relating to being "done" or at one's mercy from the 19th century:

Thinking he had got us fairly on toast, he meant to blackmail us pretty freely.
— John Guille Millais, A Breath from the Veldt, 1895

So, it's likely the expression was used earlier in the 20th century, but it cannot be denied that Ghostbusters helped make it popular.

We would rather you raise a glass and make a unifying toast than strap on a proton pack and make something toast (unless that something was worshiped as a Mesopotamian god, of course). Making yourself toasty by a fire also isn't a bad idea—and you can do that while thinking about that toast to someone you admire.