John Mariani
2
a
: an act of proposing a drink in honor of or of drinking in honor of someone or something
He proposed a toast to the newlyweds.
She stood up to make a toast.
… you must remember not to drain your glass on each toast.

Oretha D. Swartz
b
: someone that is highly admired
She's the toast of society.
He was the toast of the town.
c(1)
archaic : a person who is honored with a drink and wishes for good health or prosperity
The remaining toasts were DOCTOR MELL; Mrs. MICAWBER (who gracefully bowed her acknowledgements from the side-door …), Mrs. RIDGER BEGS (late Miss Micawber) …

Charles Dickens
(2)
: something in honor of which people usually drink : a sentiment that is drunk to
She was famed as the most beautiful girl in the country. Men of the army, men of the navy, and men of the Church, alike adored her. Her name was a toast from Monterey to San Diego.

Helen Hunt Jackson
As Peter and the two remaining ladies raise their champagne glasses, Madison offers the toast: "Here's to seeing if love can conquer all."

wbal.com
3
slang : someone or something that is finished or done for
Soon their relationship was toast.

Alexandra Witze
4
: an improvisational rhyming narrative poem or song of African American tradition that employs clever, ironic, bawdy, and irreverent language to salute or celebrate someone

: to propose or drink to as a toast

Elazar Sontag, Bon Appétit, 14 Sep. 2022 Or the club sandwich, a decent pile of turkey, avocado and cheese on toast.

Marissa Charles, Peoplemag, 11 Aug. 2022 Afterward, their families gathered for a Champagne toast in the garden before heading off to dinner at Casa Tua.

Christine Condon, Baltimore Sun, 12 July 2022 The president and first lady held a champagne toast for both Psaki and Jean-Pierre last week at the White House in the Executive Residence.

Courtney Subramanianstaff Writer, Los Angeles Times, 16 May 2022 Revelers can get their song on at Town Pump with karaoke and a midnight champagne toast.

These example sentences are selected automatically from various online news sources to reflect current usage of the word 'toast.' Views expressed in the examples do not represent the opinion of Merriam-Webster or its editors. Send us feedback.

Note: The word toast in the sense "a person who is honored with a drink and wishes for good health or prosperity," with the accompanying verb "to propose or drink to (a person) as a toast," first appears in print at the very end of the seventeenth century. The conventional assumption is that the use is metaphorical, "the name of a lady being supposed to flavour a bumper like a spiced toast in the drink," as it is expressed in the Oxford English Dictionary, first edition. This is pure speculation, however, as the origin of the sense remains obscure. Two oft-quoted explanations appear in Richard steele's journal The Tatler, which appeared between April, 1709 and January, 1711. The first is in No. 24 (June 4, 1709), probably written by Joseph addison: "To know what a toast is in the country gives as much perplexity as she herself does in town: and indeed the learned differ very much upon the original of this word, and the acceptation of it among the moderns. … But many of the wits of the last age will assert that the word, in its present sense, was known among them in their youth, and had its rise from an accident in the town of Bath, in the reign of King Charles the Second. It happen'd, that on a publick day a celebrated beauty of those times was in the Cross Bath, and one of the croud of her admirers took a glass of the water in which the fair one stood, and drank her health to the company. There was in the place a gay fellow half fuddled who offered to jump in, and swore tho' he liked not the liquor, he would have the toast [alluding to a drink with toast dipped in it]. He was opposed in his resolution; yet this whim gave foundation to the present honour which is done to the lady we mention in our liquors, who has ever since been called a toast." Another allusion to an origin, in No. 31 (June 21, 1709) by Richard Steele, makes no mention of the earlier story: "Then, said he [a gentleman in the country unfamiliar with the word], why do you call live people toasts? I answered, that was a new name found out by the wits, to make a lady have the same effect as burridge [borage, used as a garnish or ingredient in cordials] in a glass, when a man is drinking." As both Addison and Steele were capable of mixing fact with invention, these anecdotes should probably not be taken too seriously.

Middle English tosten "to darken by heat, crisp and darken bread by heat," borrowed from Anglo-French toster, tostir (also continental Old French), going back to Late Latin tostāre "to roast, grill," frequentative derivative of Latin torrēre, past participle tostus (going back to *tors(e)tos) "to heat so as to dry, scorch, parch, (of food) roast" — more at thirst entry 1

14th century, in the meaning defined at transitive sense 2

1700, in the meaning defined above 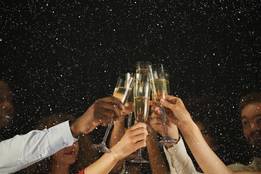 A Few Words on 'Toast'

Need to spice up your drink? Add a piece of toast.

toasted; toasting
1
: to make (food) crisp, hot, and brown by heat
toast bread
toast cheese
2
: to warm completely
Their bare toes toasted in the heat from the fire.

1
: sliced bread made crisp, hot, and brown by heat
2
: an act of drinking in honor of a person
3
: a person in whose honor other people drink
4
: a highly admired person
He's the toast of the town.

toasted; toasting
: to drink in honor of

More from Merriam-Webster on toast