objective case of they

1 : they sense 1 —used as object of a verb or preposition took them backgave it to them
2 : those —used especially as antecedent to a relative pronoun the best of them that speak this speech— William Shakespeare —used as the subject of a verb chiefly in nonstandard speech and for humorous effect them is fighting words

nonstandard
: those —used chiefly in nonstandard speech and for humorous effect

First Known Use of them

Learn More About them

Time Traveler for them

The first known use of them was before the 12th century 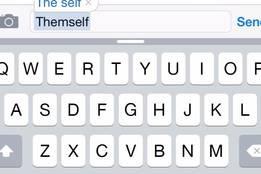 Dictionary Entries Near them

More Definitions for them

Kids Definition of them

objective case of they

More from Merriam-Webster on them

Nglish: Translation of them for Spanish Speakers

Britannica English: Translation of them for Arabic Speakers