1a : a dessert consisting of a filling (as of fruit or custard) in a pastry shell or topped with pastry or both an apple pie a slice of pumpkin pie … desserts include lots of berry pies, butter pecan ice cream pies with a hot caramel topping, flummeries, and crisps.— Judith and Evan Jones
b : a meat dish baked with biscuit or pastry crust a chicken pie — compare potpie
2 : pizza The pizzeria earned its VPN (that's Vera Pizza Napoletana) status … for its authentic Neapolitan pies which are baked in a wood-fired oven imported from Italy.— Katie Jackson
3a : affair, business … she wanted her finger … in every possible social pie …— Mary Deasy
b : a whole regarded as divisible into shares giving the less fortunate … a larger share of the economic pie— R. M. Hutchins

informal
: to throw a pie at (someone) : to hit (someone) especially in the face with a pie Sierra Club Executive Director Carl Pope was the latest target of a group of pie-wielding activists. … Pope was pied because he has gone against the interests of Sierra Club founder John Muir and the environment in his stance on such issues as the Headwaters Forest deal, the group said in a statement. — Associated Press One of his first duties as cub master was to be "pied" by those cub scouts who sold the most popcorn during a fundraiser to help pay for summer camp.— Carol Malley

1 : type that is spilled or mixed
2 : a pi character or matrix

First Known Use of pie

History and Etymology for pie

The first known use of pie was in the 13th century 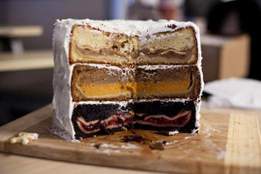 : a food consisting of a pastry crust and a filling (as of fruit or meat)

More from Merriam-Webster on pie