1
: watch pocket
2
: a short strap, ribbon, or chain attached especially to a pocket watch
3
: an ornament attached to a fob chain
4
or key fob : an object attached to a key chain or key ring
especially : a small electronic device used typically in place of a key (as to unlock a door or start a vehicle) or to remotely initiate the action of another device (such as a garage door)
Wireless systems are triggered by pressing a button on a remote fob much like those used for car alarms. —

Max Alexander
The remote-start key fob has a range of several hundred feet, allowing you to start the car's engine from inside your home. —

Jeff Yip, Houston Chronicle, 3 Nov. 2017 The vehicle had an electronic key fob inside the unlocked vehicle, which allowed the suspect to start the car. —

Brittany Seemuth, Milwaukee Journal Sentinel, 17 Oct. 2017 The power liftgate has a programmable height setting and can be opened one of three ways; a button on the key fob, a button inside the vehicle, or a touch pad on the lower edge of the liftgate. —

Emma Jayne Williams, star-telegram, 30 Sep. 2017 Grand Theft Auto 8800 block of Miralago Way in Parkland, Sept. 5, 8:07 a.m. People entered two unlocked vehicles in the driveway and rummaged through them and stole a 2011 Jaguar XJL with the key fob left inside. —

Sun-Sentinel.com, 17 Oct. 2017 BURGLARY Keys attached to a key fob and lanyard were reportedly stolen between Sept. 9 and 10 from a vehicle parked in the 6400 block of Spaulding Avenue. —

Chicago Tribune, chicagotribune.com, 18 Sep. 2017 Ed Bilinkas offered the jury his theory of how the key fob may have been broken. —

Erin Moriarty, CBS News, 7 Oct. 2017 View 105 Photos Active Key-Fob Commands For Rams equipped with the air suspension, holding down a button on the key fob will lower the truck for easier entry. —

These example sentences are selected automatically from various online news sources to reflect current usage of the word 'fob.' Views expressed in the examples do not represent the opinion of Merriam-Webster or its editors. Send us feedback. 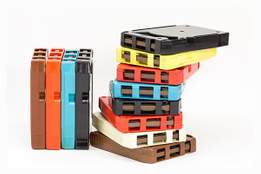 Can you name these antiquated items?

noun
ˈfäb
1
: a short strap, ribbon, or chain attached especially to a pocket watch
2
: a small ornament worn on a watch chain
3
or key fob : an object attached to a key chain or key ring
especially : a small electronic device used typically in place of a key (as to unlock a door) or to remotely work another device

abbreviation
free on board