Free rein, meaning "unrestricted liberty of action or decision," is often misinterpreted as free reign. The expression free rein originated from horseback riding and refers to the act of holding the reins that control the horse loosely so as to allow the horse to freely move along at its own pace and in its desired direction.

Coming here was an opportunity to redevelop the marketplace. I have free reign to build the brand.
— Chris Townson, quoted in Travel Weekly, 15 Dec. 2017

"I was given free reign to redesign the galleries," said Kowalski, who came to the Rockwell in March…."
— Jesse Kowalski, quoted in The Berkshire Eagle, 25 Sept. 2015

In the quotations above, it is quite possible the writers felt their interviewees possessed an unbridled royal authority to do as they please. But what follows "free reign" in the quotes suggests a different intent: the speakers are referring to the freedom granted to them to do as they choose—and not to their power as a ruler to do so. The misinterpretation of the set phrase "free rein"—referring to unrestricted liberty of action or decision—as "free reign" is an eggcorn that writers struggle with all too often. 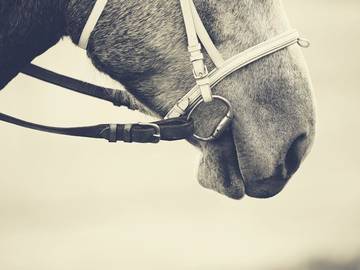 Next question: is this horse 'champing' or 'chomping' at the bit?

The expression "free rein" originated as horseback-riding jargon referring to the act of holding the reins (the straps by which a rider controls the horse) loosely so as to allow the horse to freely move along at its own pace and in its desired direction. Figurative use of the phrase referring to freedom of action goes back to the 17th century.

The tongues of Angels are not able to expresse what benefits doe redound unto man by the right ordering of the tongue, and what harmes and inconveniences againe, when we give it free reines to lash out.
— Alexander Read, The Chirurgicall Lectures of Tumors and Ulcers, 1635

About two centuries later, the phrase perplexingly begins appearing in print in the form "free reign."

Here we may give free reign to our imagination, with the moral certainty that science will supply nothing tending either to prove or to disprove any of its fancies.
— The Salvator and Scientist (Chicago, Illinois), September 1896

Why it begins to appear during a time when the horse was still the primary mode of transportation is puzzling. On the other hand, in modern times, misinterpretation of "free rein" as "free reign" is a bit more understandable—though still grammatically wrong—after all, how often does the average person handle the reins of a horse? To those unfamiliar with the equestrian origin of the phrase, reign with its association with monarchy (influenced by the media's obsession with the English Royal Family) might seem the better choice than a word for straps to control a horse, and an Internet search will confirm that quite a few people agree.

If you are one of those people, we would like to offer a couple of mnemonics to help you mentally autocorrect "free reign" before it becomes an acceptable (yet still illogical) variant of "free rein." First, remember that reigning as king and queen entails having the freedom to choose and make decisions; therefore, monarchs have "free rein" during their reign. Also, there are a handful of other common figurative phrases originating from a horse's rein that you can associate with "free rein" if you have a brain cramp.

The supervisor has/keeps a tight rein on every stage of production.

We need to rein in our spending.

She handed over the reins of the company to her successor.

As you can see, rein is the word to use when implying holding back or granting freedom of action; reign, on the other hand, is reserved for the ruling over a people or land. "Free reign" might sound impressive to you but not to your editor or teacher.

In summary: Reign is royal authority, the influence and sway of a ruler, or one who resembles a ruler. Rein is the strap fastened to an animal (such as a horse or mule) by a bit, which allows a rider or driver to control the animal. If you rule over something you may be said to reign over it. If you are allowed a great deal of freedom you might be said to have free rein.