We'll get to the point.

For the most part, moot and mute keep their distance from each other. No law student refers to “mute court,” and no one looks for a remote’s “Moot” button during commercials. But in one common locution they’re now found swapping places rather often: the "moot point." 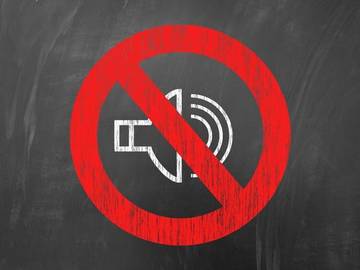 By the early 20th century, 'moot point' began to mean "an issue that lacks practical significance."

Moot goes back to pre-Norman-Conquest England, when it referred to a collective assembly for meting out justice. In contrast, mute, meaning “silent” or “unable to speak,” derives from a French ancestor that was imported to Britain by those same wily Normans. Thus, the two are hard to connect historically.

Strictly as a noun, moot is now only used in historical contexts (and on Game of Thrones). As a verb (“the issue was ultimately mooted by the firm’s bankruptcy”), it has been used mostly by lawyers. And as an attributive, its medieval meaning still echoes in the name of a venerable law-school ritual: the mandatory moot court, in which students pose as lawyers on opposite sides of a case, preparing briefs and then arguing them orally as if in a courtroom. Think mock trial, but on the appellate level.

The term “moot point” has been used since the mid-19th century to mean an unsettled issue appropriate for law-school debate. By the early 20th century it began taking on the related sense of an issue that lacks practical significance—related because the outcome of the rhetorical trial won’t change anything in the real world. Though this latter sense is relatively new, it has become (at least on this side of the Atlantic) perhaps more common than the original.

It was a moot point to consider whether the temptations that would be brought to bear upon him in his course would exceed the staying power of his nature.
— Thomas Hardy, Two on a Tower, 1882

While the term’s meaning expanded, its spelling remained unchallenged for over a century. But around 1960 we began to see the variant “mute point” popping up. And today, though “mute point” is still widely shunned in edited publications, it nevertheless can sometimes be seen slipping through here and there.

Say what you will about Paul Gascoigne - and most people have over the years - but he remains one of the most technically gifted players in Great Britain. For how much longer is a mute point - his tank is running low - but where there is a will, there is possibly a way.
— Russell Kempson, The Times (London, Eng.), 10 Sept. 1998

Since moot and mute aren’t swapped elsewhere, why the mixup here? Beyond their physical similarity, could it be that, however unacceptable “mute point” may be to purists, it really isn’t completely nonsensical? Doesn’t the notion of a noisy debate that has gone figuratively silent, or of an issue that is ”silent” in its real-world import, actually seem kind of reasonable? That said, keep in mind that should you use it, the people ready to tell you it's incorrect will not have a mute button.

MORE TO EXPLORE: Counsel vs. Council: Explaining the Difference