You're on your way to good spelling

English has borrowed countless words from the French language over the centuries, many of them thoroughly anglicized by time and usage (like language and usage), but others, more recent arrivals, keep their French spellings and approximate pronunciations, like cuisine and garage and motif.

There are far fewer two- or three-word compounds that have become part of English vocabulary, and they typically are both spelled and pronounced in the French manner:

Most of these still retain a foreign color, adding an intentional je ne sais quoi to sentences that otherwise might seem ordinary. Some French phrases, however, are more thoroughly lexicalized into English and are used in everyday speech and writing—so much so that their spelling sometimes betrays the fact that writers have assumed that they are made up of English words rather than French ones. 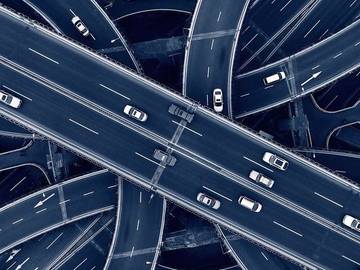 The history of English is full of left turns.

Take en route, meaning “on or along the way.” It’s been in use in English since at least the mid-18th century, and so has had time to settle in and get comfortable. It’s usually used as an adverb:

I finished my homework en route to school.

We stopped to eat en route to the museum.

And sometimes it can be used adjectivally, as in “en route delays.”

Unlike some other French borrowings, en route is pretty easy to say in English without much adjustment of phonotactics, or the conventional set of sounds used by a native speaker of a language. We really do change some sounds when we borrow terms from other languages. Think of the way that maître d' is pronounced, for example: no French person without a knowledge of English would ever understand it. But pronouncing en route as \on root\ is pretty much on the mark. The difference, of course, is the French nasalized vowel. In French, the final N in en is not pronounced but the preceding vowel is pronounced in a nasal manner, similar to the way vowels are pronounced in English before the consonants N and M. The closest equivalent to this vowel in English would be the one in words such as honk or don.

Which explains why in English we may sometimes see en route written in English as on route. This is widely considered a misspelling, but it does show up in edited text:

On route in their mobile home, the students watch the news channel relay information to the public about the government's handling of the situation

Other, smaller engines may fire on route to refine the craft's trajectory or pull the craft into orbit around a target object.

The phrase is also used figuratively, sometimes with the same misspelling:

Spieth took an unplayable penalty on route to one of the best bogeys ever seen in recent Majors history.

Here are some older examples from prestigious publications:

It closed up the river, and laid an embargo on a large amount of goods on route for that locality.
— New York Times, 23 November 1865

On route to his rendezvous, the Nazi is captured by an American patrol.
— TIME, 22 December 1980

This fact was perhaps omitted because under the federal statute at issue in Hamling v. United States, 418 U. S. 87 (1974), a defendant could be prosecuted in any district through which obscene mail passed while it was on route to its destination
— United States Supreme Court, ASHCROFT, ATTORNEY GENERAL v. AMERICAN CIVIL LIBERTIES UNION et al., (2002)

It’s also not hard to find examples of in route used for en route:

Now, Rollins is arguably the hottest act in WWE and its most popular superstar in route to solidifying himself as a top merchandise mover, something he's been since 2015.

Trump was in route to talk to members of his own party about immigration policy.

Other phrases that use en are also misspelled in this way, such as en masse and en suite:

Spare a thought also for the parish of Walberwick where the council resigned on masse over a combination of cover ups and Christmas trees exposed by FOI requests.

The on-suite bathroom includes a separate shower and bathtub.

Bearing in mind that these phrases have kept their French spellings should help keep your spelling on point.