The correct phrase for bringing something under control is rein in, not reign in. Rein in is an allusion to pulling on the reins of a horse in order to exercise more control. 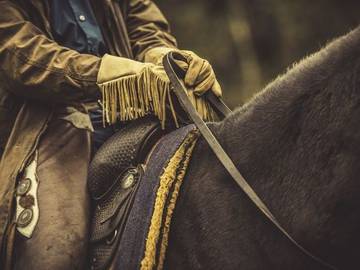 When something is out of control—be it a government's spending or your toddler's tantrum—you might feel the need to talk about reining that out-of-control thing in—or would that be reigning it in?

The quick answer is this: the phrase you want is rein in. It's an equestrian allusion—if you rein in a horse, you pull the reins of the horse—the straps fastened to the bit of a bridle and used by a rider or driver to guide and control the horse—tight so that you control where the horse goes and how fast.

The answer would have been far more obvious in the early 20th century, when automobiles had yet to displace their predecessors. In those days, getting somewhere often involved a horse, and as the equestrians among us still know, controlling a horse usually involves using reins.

Origins of 'Rein In'

The noun rein has been in use since the 13th century; the verb has since the 15th century meant "to control or direct with reins." It's also been used figuratively for a long time:

Spur them to ruthful work, rein them from ruth!
— Shakespeare, Troilus and Cressida, 1609

And rein in specifically seems to have begun in figurative use:

… therefore we ought to bee the more incouraged to serue god, sith wee see that wee bee not reined in with so rough a bitte, nor held so short as the fathers of olde time were …
— Arthur Golding (translator), The sermons of M. Iohn Caluin vpon the fifth booke of Moses called Deuteronomie…., 1583

In current English, rein in is used to mean both "to limit or control (something or someone)" and "to make (an animal) stop by using reins."

Meanwhile, reign too is a verb. It can mean, among other things, "to possess or exercise sovereign power," as in "a queen who reigned for 50 years," and "to be predominant or prevalent," as in "a classroom where chaos reigns." It does not, however, have any meanings relating to limiting or controlling someone or something.

For More Check Out: Free Rein vs. Free Reign