How English Got Frenchified 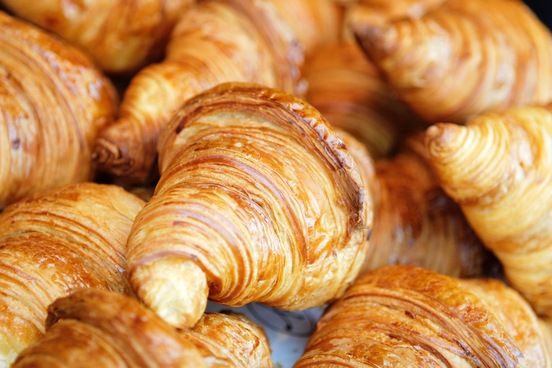 If you've always considered yourself more of a word nerd than a history buff, then the Norman Conquest might be way off your radar. But when William, Duke of Normandy, conquered England in 1066, the political enterprise had linguistic implications: the English lexicon would never be the same.

William had almost certainly been chosen as successor by the English king 15 years prior to the conquest, but that didn't stop the king from choosing someone else for the throne on his deathbed. That someone else was a powerful earl whom William eventually routed. The Norman Conquest, as William's takeover came to be known, set off many changes in English culture, including its language. William put French-speaking Normans in nearly all of the positions of power in the country, and the result was the disappearance of vernacular English from the written record for about two centuries. Meanwhile, English got Frenchified. French words—mostly Anglo-French words as we call the particular kind of Medieval French used in England—dominated the language of literature, law, and administration. Many of these dominating terms have stuck around.

In modern English, it's often the more formal- and fancy-sounding words that have the French pedigree—evidence of the prestige bestowed on the language. What follows is a list of pairs of words with similar meanings, each with a pre-Conquest and post-Conquest member. So grab a croissant and read on. 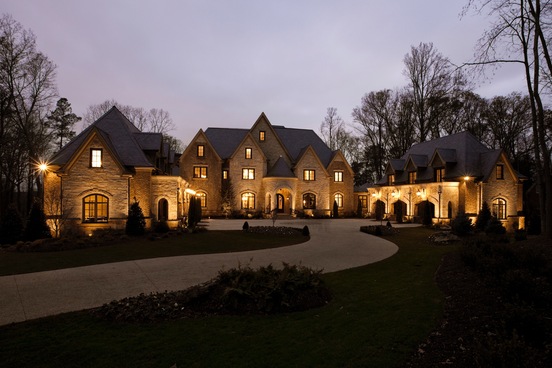 A mansion is where you hang your designer hat.

Mansion was a versatile term in its early English days of the late 14th century. It could, as it does now, refer specifically to a very fancy house—in particular a "manor" house—or it could refer to something much, much less pretentious, like a shack or even a tent. It could, in fact, refer to anything someone could live or stay in. That broadest meaning was no longer in use by the end of the 18th century. (Other meanings of mansion had also by then fallen by the wayside, including its use as a synonym of stay meaning "the act of remaining or dwelling," as when Francis Bacon wrote in his 1605 Advancement of Learning "... the solidness of the earth is for the station and mansion of living creatures....") English speakers had been using house for centuries before mansion came along. House comes from the Old English hūs and works for houses large and small. 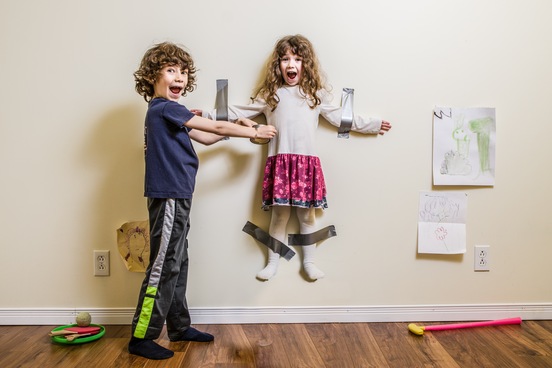 A possible warning for those thinking about having offspring.

Progeny. Offspring. The former has a scientific ring to it, while the latter sounds like it has just emerged from a dappled glen in a quiet forest. Ralph Waldo Emerson put them both to good use in his essay "The Poet":

So when the soul of the poet has come to ripeness of thought, she detaches and sends away from it its poems or songs,—a fearless, sleepless, deathless progeny, which is not exposed to the accidents of the weary kingdom of time: a fearless, vivacious offspring, clad with wings (such was the virtue of the soul out of which they came), which carry them fast and far, and infix them irrecoverably into the hearts of men. These wings are the beauty of the poet's soul.

The word progeny has a Latin pedigree, natch, and arrived in English via Anglo-French in the 14th century. Offspring, from Old English roots meaning "off" and "to spring," was a fully mature adult, as far as words go, by then. 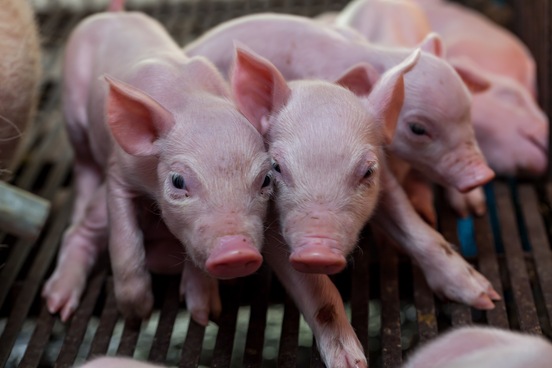 A few pigs that would likely rather avoid becoming pork.

Sir Walter Scott pointed it out in Ivanhoe:

"Why, how call you those grunting brutes running about on their four legs?" demanded Wamba.

"And swine is good Saxon,'' said the Jester; "but how call you the sow when she is flayed, and drawn, and quartered, and hung up by the heels, like a traitor?''

"I am very glad every fool knows that too,'' said Wamba, "and pork, I think, is good Norman-French; and so when the brute lives, and is in the charge of a Saxon slave, she goes by her Saxon name; but becomes a Norman, and is called pork, when she is carried to the Castle-hall to feast among the nobles…"

Pork does indeed come from Anglo-French (and originally from the Latin porcus). It arrived in the 14th century. Pig has at times been used to refer to the meat of the creature, but it does not seem to have been used that way before pork arrived. Swine doesn't sound like a menu item, and from what we can tell, restaurateurs and home cooks alike have traditionally agreed on that.

It doesn't end with pigs and pork though. Scott's Wamba continues:

"… old Alderman Ox continues to hold his Saxon epithet, while he is under the charge of serfs and bondsmen such as thou, but becomes Beef, a fiery French gallant, when he arrives before the worshipful jaws that are destined to consume him. Mynheer Calf, too, becomes Monsieur de Veau in the like manner; he is Saxon when he requires tendance, and takes a Norman name when he becomes matter of enjoyment.''

And it's true: beef and veal (or, as Scott spells it, veau) are from Anglo-French, while cow, ox, and calf all predate the Norman Conquest by centuries. The same pattern exists with mutton, the Anglo-French menu item, and sheep, the Old English word for the livestock recommended for counting whilst trying to fall asleep. 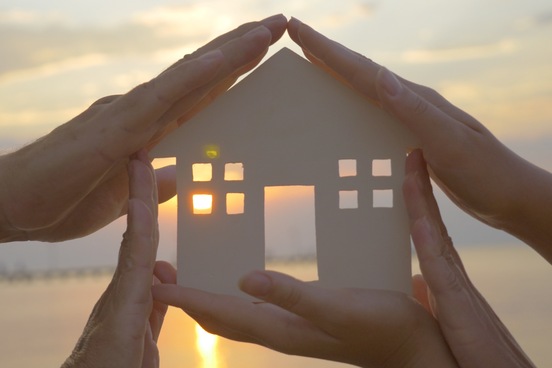 Home is where the heart resides.

The word reside moved into the English lexicon in the 1400s, where it settled alongside older, more established terms like live, abide and dwell. The details of its provenance aren't certain—it came to 15th century English from either the French of the day (the word resider) or directly from the Latin residēre. Live, abide, and dwell had been members of the English language since the language's earliest days, and if any of them (or the people who used them) had feelings about the interloper, those feelings have been lost over time. Shakespeare found reside occasionally useful, as in this from Antony and Cleopatra, where he'd already used one of the other words in the sentence:

Our separation so abides and flies / That thou, residing here, goes yet with me, / And I, hence fleeting, here remain with thee. 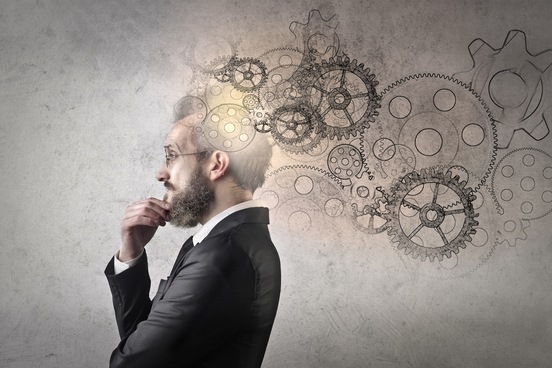 When he said his wheels were turning, he didn't explain he had so many wheels.

English speakers have used some form of the word think to communicate what someone who is pondering is doing since the days of Old English (when the form was actually thencan). Though we know of no complaints about the job think had been doing, the word conceive was conceived as having some value and in the 14th century it was brought in to help think out. It arrived with multiple meanings, including the one about becoming pregnant and the one having to do with, uh, thinking. Its origin is a Latin word (concipere) meaning "to take in, conceive." 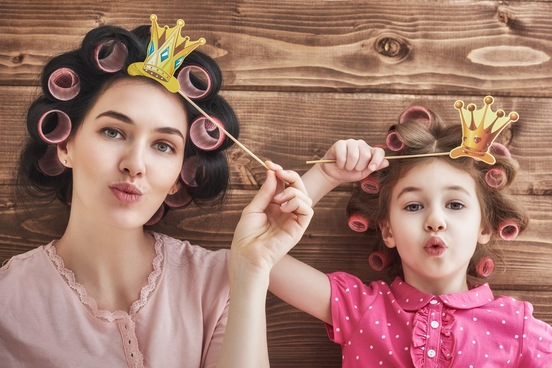 A multitasking mom being maternal and regal at the same time.

While nothing could easily replace dear old mother, even in the tumultuous years after the Norman Invasion, at least one mother descriptor strode into the English language in the 15th century: centuries-old motherly had to make room for maternal, which is credited to both French (maternel) and Latin (maternalis) words of the day. Ultimately they all link to the ancient Sanskrit word mātṛ meaning, of course, "mother." Other familial terms got adjectival synonyms in the same way during that period. Fatherly got paternal, brotherly got fraternal. Sisterly didn't even exist till the late 1500s, much less have a competing French form. It eventually got sororal, but most of us have been too pleased with sisterly to give sororal a real chance. (Sorority of course comes from the same Latin root: soror, meaning "sister.")