Is 'School' Ever Properly a Verb?

It's time for you to get schooled on 'school'

Every year the month of September brings with it a return to school and a number of difficult to answer questions. Among these are 'should I wear my backpack with one strap or two?' 'Will this be the year I finally break free of the soul-crushing social position to which I have been assigned?' And perhaps most vexing of all, 'can I use school as a verb?'

The short answer to this last question is 'of course you can.' The long answer involves a pinch of Twitter, a dollop of functional shift, and two shakes of tears. 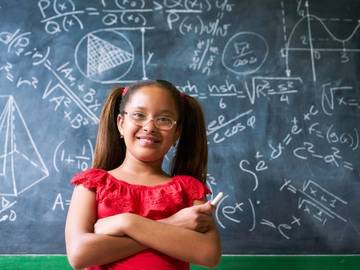 Please don't ask us to solve these math problems.

School is one in a long line of words of which people say "that's not a verb," when it would perhaps be more proper if they said "that may be a verb, but the sense you are employing is one that I find offensive." Gift, impact, contact, and author are just a few of the words that have been used as verbs for hundreds of years, only to have people in the 20th and 21st centuries begin to publicly doubt their verbishness.

How to annoy people when they say "I just got schooled": "Actually, the word 'school' is not a verb. You just got educated". #TheFig

It is true that the earliest noun sense of school ("an organized source of education or training") has been around for longer than the earliest verb sense ("to give teaching or training to"). The noun has been in use since Old English, and the verb didn't crop up until the 15th century. But there is a considerable body of writing over the past five or six hundred years with school used as a verb, and it does not appear to have done any irreparable damage to our language.

I schooled him soundly against Puritanisme, which he disavowes, though somewhat faintly; I hope his Highnesse and the King will second it.
—Anon., Mysteries of State & Government, 1654

The poor Man being thus Schooled by his Wife, must provide for this Journey, or else all the Fat's in the Fire; there will be no quietness, if she does not go abroad.
–Anon., The Fifteen Comforts of Rash and Inconsiderate Marriage, 1694

My years at the convent, where I had been schooled in the art of sacrifice, self-denial and endurance, had been quite ineffective.
—Farida Karodia, A Shattering of Silence, 1993

She was not an impulsive woman, and her life had schooled her to restrain her tongue.
—Virginia Woolf, The Voyage Out, 1915

you have learnt softness; I, by your example,
am well-schooled in contempt; and while
you speak of truce I laugh, and to your pleading
turn a cool and guarded profile.
-Fleur Adcock, Knife-play (from The Eye of the Hurricane), 1964

Although the verb form of school has a number of senses which are perfectly acceptable, there is a colloquial one which appears to stick in the craws of many, and that is the use of school to mean "admonish, teach a lesson to."

Maybe that's why Bucknall is so determined to put the moves on Worthy in practice. Worthy, however, has his doubts about that. "Never," he said. "All those young guys—J.R., Scott (Williams)—I'll school 'em, and they know it."
—Jamie Rosenberg, The Daily Tar Heel (Chapel Hill, NC), 12 Jan. 1990

None of this should be taken as an exhortation on the part of Merriam-Webster for you to go into this school year brandishing the verb use of school like a cudgel, using it whenever you can. It is, however, a gentle reminder that sometimes verbs will become nouns, nouns will turn into verbs, and you should rarely, if ever, take language advice from people on Twitter. (Except us.)