Is 'gift' really a verb?

Gift as a verb has a 400-year history of use and means “to present someone with a gift.” Some feel strongly that give is the correct word, but gift-as-a-verb is an acceptable and efficient alternative. Since the 1990s the word has surged in popularity, perhaps in part because of a well-known Seinfeld episode concerning “regifting” and “degifting.”

Ooh, sorry—did that use of the verb gift make you feel weird? Or perhaps fill you with an unearthly fury? We apologize, but we did it for your own good. You're likely to keep hearing and seeing the verb gift in the coming weeks, and as your dictionary, we feel it is our duty to help make those encounters as pain-free as possible. If you'd like to be better equipped to cope with the onslaught of gift-as-a-verb incidences, read on. 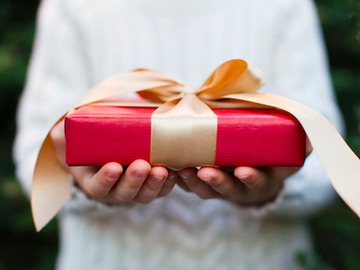 Yes, Gift is a Verb

First things first: there are some among you who are asking, "Is the verb gift even a word?"

It's a good question, and we have a good answer for you, which is, sorry, YES. Gift has been used to mean "to present someone with a gift" for 400 years.

To which you might well reply: "OK, fine, but do we really need it? What's wrong with using plain, old, utilitarian give?"

And of course there's nothing wrong with using give. It's a great word, as is evidenced by the frequency with which we use it and the variety of meanings we've bestowed on it: in this very dictionary, the entry for give has 16 transitive senses and 5 intransitive senses, with multiple subsenses listed at the majority of those. But a word that has such frequent and varied use can also be ambiguous. Take the sentence "She gave me the book." Without getting more information, we don't know if the book was a gift or if she simply handed it to the speaker. But in "She gifted me the book" the meaning is instantly clear: the book was a gift.

Best Buy said they are looking for the gentleman in hopes to connect with him and gift him some items he wasn't able to buy that night.
— Elenee Dao, KXLY, 6 Dec. 2019

All of this, however, is unlikely to stem the annoyance/disgust/fury of those who truly detest the use. Maybe having someone to blame (however unfairly) for the popularity of gift-as-a verb would help.

While it's true that gift has meant "to present someone with a gift" for 400 years, the verb has never been so widely used as it is now. It's impossible to say exactly why this is, but we may be able to place a smidgen of the blame on a certain comedian.

Maybe you've seen the rerun: in a Seinfeld episode from January 1995 Tim Whatley "regifts" a label maker that Elaine gives him, and then Jerry wants to "degift" some Super Bowl tickets that he gave Tim when he thought he couldn't use them. Gift-as-a-verb in 1995 was already seeing an increase in use that seems to have begun in earnest around 1960, but that increase became especially dramatic in the second half of the 1990s. We can't say for certain that the verbal use of regift and degift made people somehow more willing to treat gift as a verb, but if it makes you feel better to blame Jerry Seinfeld and his friends we won't stop you. Perhaps you'll even want to include Seinfeld scriptwriters among those who've wronged you as you indulge in the Airing of Grievances at your Festivus celebration.