'Author' is a Verb

You might author something even if you are not a writer

For all the dreamers typing in the corners of coffee shops, transforming from a writer to an author might seem like the ultimate fantasy. But what those frantic scribblers may not know is author, used as a verb, vanished from our lexicon for centuries.

The verb author has a very strange history marked by a large gap of disuse. It first appears in the late 1500s with both definitions that are in use today—"to be the author of" and "to originate or create"—but inexplicably the verb nearly disappeared from about the mid-1600s to the early 1900s. 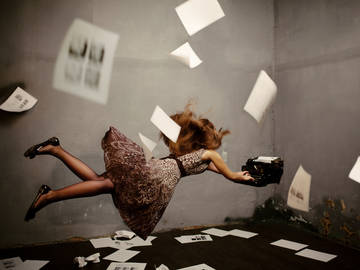 A totally normal photo of a typical author at work

Writers did occasionally employ the participial form authoring as a noun during the 18th and 19th centuries.

There are certain mysteries or secrets in all trades, from the highest to the lowest, from that of primeministering to this of authoring, which are seldom discovered, unless to members of the same calling.
— Henry Fielding, Joseph Andrews, 1742

Mr. Muggyson, permit me to ask you what d'ye think of my authoring? Is it not slap—to the point?
— Thomas Hall, "Effects" and Adventures of Raby Rattler, 1845

There is also evidence of writers using authored as an adjective in the late 19th century.

It is one of his double-authored pieces; and at present I incline to allow to Jonson little more than the prose, or comic scenes.
— Antiquary, 1882

It is over 300 years after its debut in the English language, however, that author emerges from the abyss of obsolescence as a standard verb in both of its original senses. One of the earliest 20th-century examples of author meaning "to make or create" comes from a sportswriter. That might seem a bit surprising, but it shows that the verb was experiencing a genuine rebirth.

Although the verb uncannily returned to the living language, it wasn't fully embraced. Some critics viewed it as a pretentious substitute for write that was to be avoided. Careful writers, however, helped introduce it to the general lexicon as a word having a slightly different use than the common verb write: essentially, author came to be used for writing entailing thorough editing and vetting, especially in preparation for publication. This unique use gave author a connotation not commonly associated with the general verb write. One authors a book or a screenplay, for instance, but not a school essay.

Authored by corrosion engineers and steel pile specialists, the book provides an in-depth study of the problems and remedies associated with corrosion of steel piles.
— Civil Engineering, November 1981

… all of these books were authored by U.S.-educated anthropologists who did their fieldwork … during the late 1970s and early 1980s….
— Andrew Kipnis, American Anthropologist, June 2003

Another modern application of the resurrected author was for the writing of laws.

How could the party that authored the New Deal and the Great Society, that championed civil rights for women and minorities and rescued the environment, that created, to so large a degree, the America that Americans are proud of, be so exiled from power?
— Russ Rymer, Mother Jones, November 2005

It should be noted that when a law is said to be "authored," there is often the implication that it was created by the combined efforts of its prime mover and its supporters. This association of the verb author with joint effort is not exclusive to legislation. Author is often used in reference to plans, films, even technological creations and football drives in which more than one hand is likely to have been involved.

Harding had authored the plan, but Clark had proposed the one move least expected by the Germans....
—Robert Katz, The Battle for Rome, 2003

Movies that are conceived and authored in 3-D simply have a higher degree of quality.
—Jeffrey Katzenberg, quoted in USA Today, 28 Mar. 2011

He also authored what many believe to be the greatest two-minute drive in Super Bowl history—88 yards in eight plays (after a holding penalty), the last one a pinpoint pass to Santonio Holmes for 6 yards and the winning touchdown….
— Ed Bouchette, The Pittsburgh Post-Gazette, 7 Sept. 2014

Considering these unique modern uses of author, it seems the verb was not simply dug up by 20th-century writers as a fancy synonym for write or create. It is tactfully employed as a word for the crafting of a well-thought-out written work and for the production of other things formed in a combined effort. Today, author can be used as a highfalutin synonym for the more everyday words write or create, or it can be called on for its distinct connotations of creating a piece of writing worthy of publication or of creating some nonliterary thing in collaboration with others. So those coffee shop writers should not only aspire to become authors. They should also dream of being a part of the kind of community that could allow them to collaborate and author a literary work.