Have you ever found yourself churning out a report or essay, thoughts flowing, fingers scurrying along the keyboard, and then you stumble over a spelling of a word? But that word isn't something like eudaemonic, it is the everyday sometime or anytime. "Do I use the closed or open spelling?," you ask yourself. Your brain is addled, and you are left staring at your screen, hopelessly trying to puzzle out which one to use. We're here to lessen this writerly stress and help you confidently apply the right spellings in your writing in this two-part lesson on sometime/some time and anytime/any time. 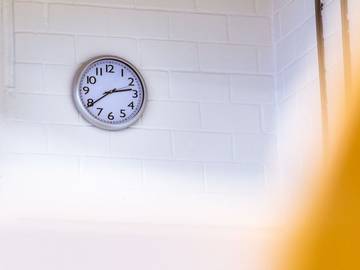 The bell will ring anytime now...

The adverb sometime can mean either "at some time in the future" or "at some not specified or definitely known point of time in the past." Affixing an "s" to the word forms the adverb sometimes, meaning "at certain times" or "occasionally." Sometime written as an open compound (some time) also has adverbial use, but it is also a standard noun phrase. As you probably guessed, it is some time that causes the most confusion to writers and editors.

The adverb sometime is a closed compound of some, which indicates an unspecified amount or number, and time ("We should get together sometime"; "They arrived sometime late last night"). The phrase "some time" is also used adverbially. Consider the sentence, "He arrived some time ago." The difference between "sometime last night" and "some time ago" may not be instantly apparent, since both phrases have an adverbial function—they indicate the time, though unspecified, of arriving. (Refresher: adverbs indicate the time, manner, place, or degree of a verb, adjective, or another adverb.) In "some time ago," however, some and time still function within the phrase itself as an adjective and a noun, and that duo works together as a noun phrase.

An easy way to tell if some and time should be written as one word or two is to insert quite before some and see if the passage still makes sense. If it does, some and time should be written separately: "We haven't seen them for quite some time"; "He arrived quite some time ago." If it does not (as in "He arrived quite sometime last night"), sometime is the correct choice. In addition, some time can be replaced with phrases like "a short time" or "a long time," and substituting such a phrase in the sentence can help determine which spelling to use. For example, in "We will arrange to meet some time next week," "a short/long time" is not substitutable for "some time," so sometime is the correct choice. On the other hand, in "It will take some time to fix," the substitution fits, so some time is correct.

Use of sometimes is rather uncomplicated. The adverb is written as one word ("We all make mistakes sometimes"). You might also come across some times as a noun phrase following a preposition.

With what time he has left, the "maverick"—an appellation he has worn throughout his career, at some times more comfortably than at others—is going to put country first and tell the truth.
— James Hohmann, The Washington Post, 23 May 2018

(Sorry, no breaks between lessons. Okay, fine, you can go get a snack. But hurry right back.)

The adverb anytime means "at any time (whatever)," and it is generally written as one word. It does also occur, however, as an adverbial phrase composed of the adjective any, which is used to indicate a person or thing that is not particular or specific, and the noun time, and, like some time, any time can function as a standard noun phrase.

The combination of the adverbs anytime and anywhere has become common in both speech and writing. A rather famous example is from film director Martin Scorsese's Travis Bickle (played by Robert De Niro) in Taxi Driver (1976), who says to his personnel officer, "I'll work anytime, anywhere." More everyday examples of anytime are "The taxi should be here anytime now" (when it arrives, be sure to check out the cabbie); "The situation doesn't seem like it will improve anytime soon"; "You can contact me anytime after 4." In all these examples, the definition "at any time" is substitutable for anytime.

When you encounter the phrase any time, look to see if it follows a preposition. If it does, it is the object of a prepositional phrase and, therefore, it is considered a noun phrase (yes, we're teaching by repetition), as in "You can get breakfast at any time of the day." It also functions as a regular noun. For example, in "The team does not have any time to spare," any is solely working as an adjective modifying the noun time.

Adverbial any time is often used in place of anytime. In both of these examples "any time" can be replaced with "at any time":

… the workspaces look like a perfect environment that isn't going to be replicated any time soon in many corporate offices worldwide.
— Tom Warren, The Verge, 6 Mar., 2017

According to MLB rules, Dominican prospects are free agents, not subject to an entry draft. They can sign with teams any time after their 16th birthday.
— Bruce Schoenfeld, ESPN, 14 Mar. 2017

If you are unsure about your use of anytime, you can either plug in the adverb's definition and see if it makes sense, or you can play it safe and use any time— and anytime, for that matter, since it has acceptable use as both a noun and adverb phrase.

In sum, although there is no difference in the closed and open spellings of sometime and anytime in speech, there is on the screen and page. The closed spellings are the true adverbs, but the open spellings also have adverbial use. Some time and any time are noun phrases, which are most recognizable when they are preceded by a preposition, but take away that preposition and they function as adverbs. Finally, some/any and time can be adjacent in a sentence without being adverbial or an object of a prepositional phrase; they can just be what they are, an adjective and a noun.

We've been lecturing for some time now—class dismissed.