Words you should know before a moon shot 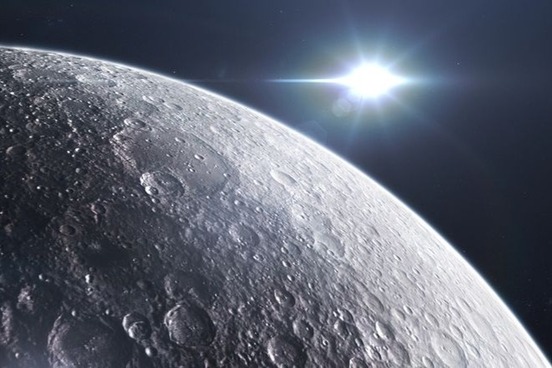 In Greek and Roman religion, Selene is the personification of the Moon as a goddess. She was worshipped at the new and full Moons. Her parents were Titans and her siblings were Helios, the god of the sun, and Eos, the goddess of dawn. In the 17th century, selenography arose as a fitting word for the science of the physical features of the Moon and its geography. 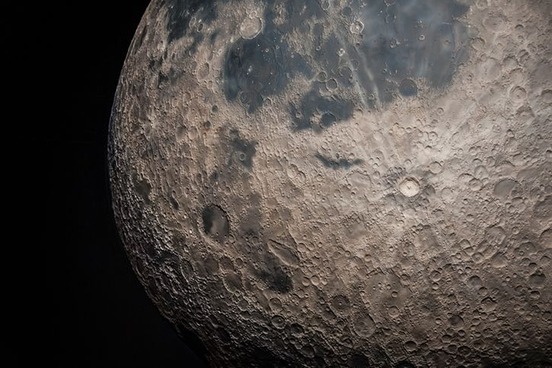 Mare didn't officially touch down in English until the mid-1800s, but the idea that the dark areas of the Moon's surface might be seas goes back to the ancient Greeks, in particular to Plutarch. Italian astronomer Galileo introduced the concept in modern times. He himself, however, never used the Latin word mare ("sea") to describe these "seas," but various writers of 17th-century Latin works did. Today, we know that the Moon is dry and that its "seas" are actually old basins containing congealed lava flows that formed dark plains. They are marked by craters, ridges, depressions, and faults. The higher elevations of the Moon are known as the highlands or terra, the Latin name for "land."

The site of the Apollo 11 Moon landing was the Mare Tranquillitatis, "Sea of Tranquility." Maria are the largest topographic features on the Moon and can be seen from Earth with the unaided eye. Together with the highlands, they form the face of the "man in the Moon." (Maria is the main plural, but mares is also sometimes used.) 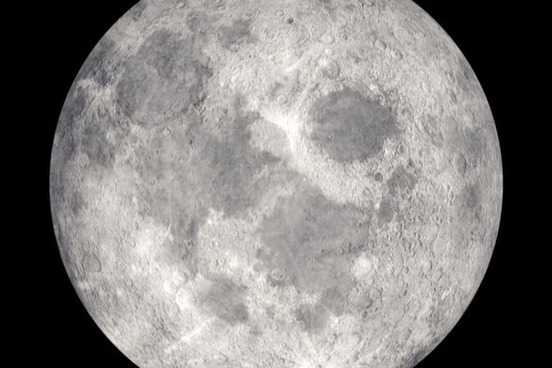 A mascon is any of the high-density regions that are below the surface of lunar maria and are held to perturb the motion of a spacecraft in lunar orbit because of excess gravitational attraction. The word is a contraction of mass concentration.

Mascons were first identified by the observation of small anomalies, such as sudden dips or accelerations, in the orbits of lunar orbiters during the 1960s.

The Urey-Gilbert theory of lunar history has predicted such large-scale high-density mass concentrations below these maria, which, for convenience, we shall call mascons.
— P. M. Muller & W. L. Sjogren, Science, 16 Aug. 1968 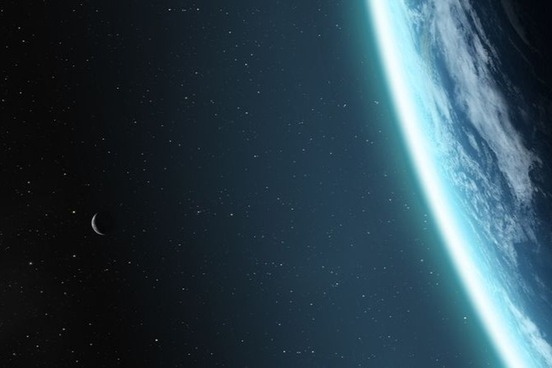 Orbit, which most frequently refers to the elliptical path that something (such as the Moon or a satellite) follows as it circles something else (such as a planet), is from Medieval Latin orbita, meaning "track of a wheel" or "rut." Orbita itself traces back to orbis, the Latin word for "disk" or "circle." Since the mid-1900s, orbiter has referred to a spacecraft placed in orbit around the Moon (or a planet), and especially one that does reconnaissance for a moon shot. 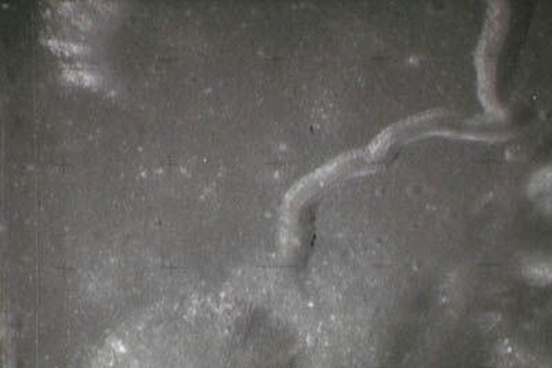 Rill can refer to a very small brook or to any of several long, narrow, meandering valleys or trenches that are devoid of water on the Moon's surface. The former rill is from Dutch and Low German words that are akin to Old English rīth, meaning, "rivulet." It flowed into English in the 16th century. The latter rill (or rille), however, is from German Rille meaning, literally, "a channel made by a small stream," but is also based on the Low German word rill. This rill was introduced by early astronomic observers in the 19th century. Some lunar rills are thought to be grabens, which, technically, are depressed segments of the crust of the moon bounded by faults. In German, graben means "ditch."

In 1971, the Apollo 15 astronauts explored the Hadley Rille, a valley of ancient lava flows named after the 18th-century English inventor John Hadley, who made notable innovations to the reflecting telescope. 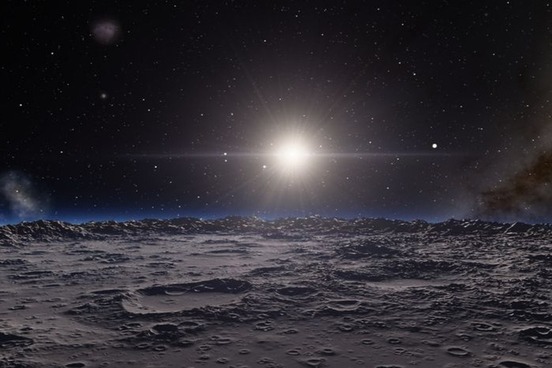 Regolith refers to the unconsolidated residual material that overlies a layer of solid bedrock on the Moon, or other celestial body (including Earth). Although it evinces the results of billions of years of bombardment by small meteoroids, its name is first seen in print in the late 1800s. Before the first unmanned spacecraft landings on the Moon in the 1960s, some astronomers feared that the regolith would be so pulverized that space vehicles might sink in. These missions—and the manned landings that followed—revealed that the regolith was only somewhat compressible and was firm enough to be supportive. 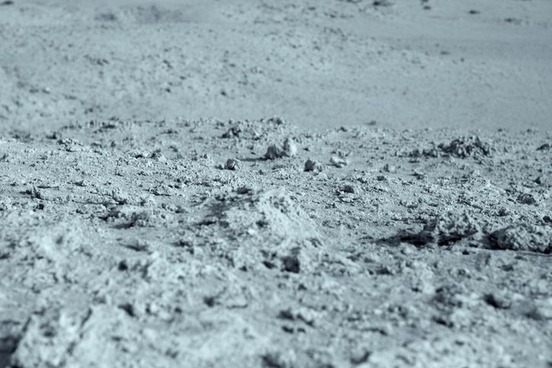 KREEP is an acronym of K (Potassium), R (rare), E (Earth), E (element), and P (phosphorus). The K for "potassium" you might be wondering about: it is a chemical symbol derived from Latinized kalium, which is akin to the Arabic word al-qili, the source of alkali, which refers to the ashes of the plant saltwort. KREEP was identified in the analysis of some rock samples that the Apollo astronauts brought back from the moon, and it is a moon rock that contains—well—potassium, rare-earth elements, and phosphorus. 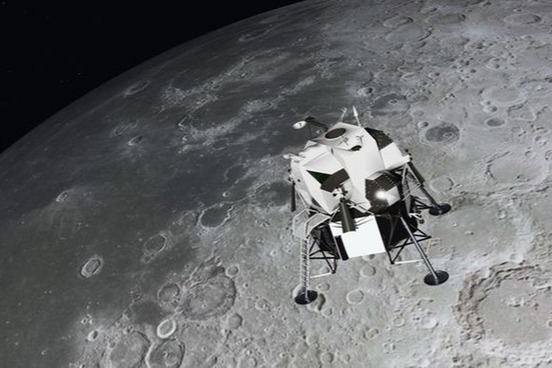 The Apollo spacecraft has three sections, each of which are called a module. The name is derived from Latin modulus, meaning "small measure." Module commonly denotes one of a set that can be connected or combined to build or complete something larger. A space module consists of the command module, the service module, and the lunar (excursion) module—all of which are independently operable units.

The command module houses the crew on liftoff and landing, and during the trip to and from the Moon. The service module carries various needs and equipment—most importantly, oxygen, water, and the rocket engine needed to guide the spacecraft into lunar orbit and then send it back to Earth. The lunar module transports people from the lunar orbit to the Moon's surface and back to the command module (also important). 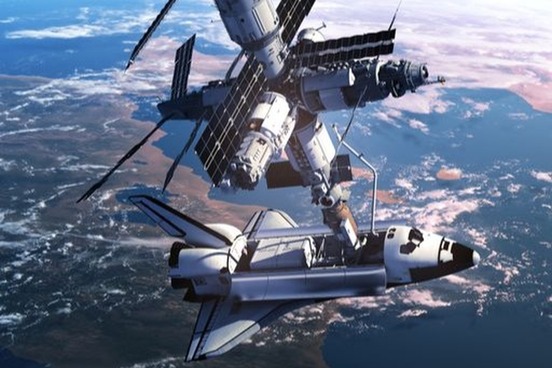 English met up with French-derived rendezvous in the late 16th century in the sense of "a place appointed for assembling or meeting." It took off into space in the 20th century suited with the sense "the process of bringing two spacecraft together." The word also designates an appointed place for the assembly of troops, ships, or aircrafts before or after an operation, and since the 17th century, it has generally referred to any meeting place or get-together, including the romantic kind. In the words of Star Trek's Spock, "Rendezvous complete, Captain." 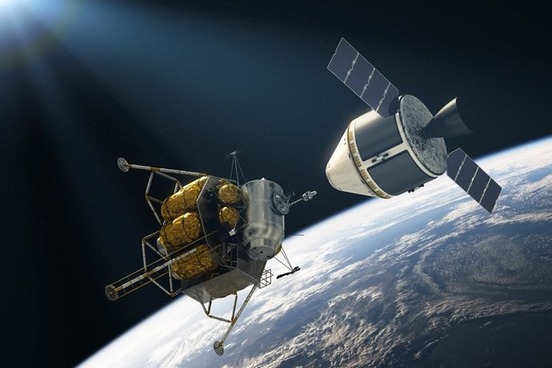 In navigation, the act of docking is the bringing of a ship or boat into a dock (an area where ships or boats load or unload, are repaired, or are simply tied up so that people can get on and off). Spacecraft "docking" is more complex: it involves the aerial joining together of very large (and expensive) vehicles in motion for mission-related purposes. The Enterprise crew in Star Trek even needed some help. 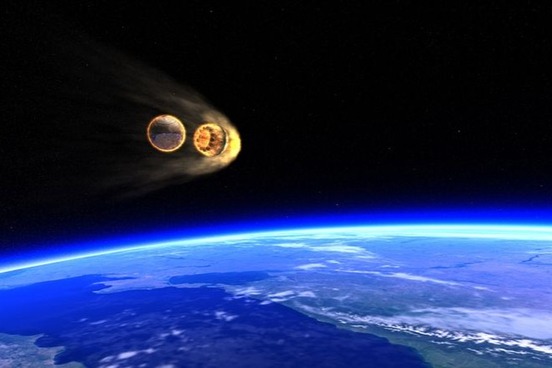 Reentry refers to the return of a spacecraft into the Earth's atmosphere after travel in space. This sense of the word enters English in the 1940s, although the word is used in law centuries before for retaking possession of property by a lessor or grantor. A concomitant effect in reentry is the severe heating caused by the compression of atmospheric air in front of the rapidly moving spacecraft. In response, heat shields were created.

The angle of reentry of a spacecraft is crucial. If the reentry angle is too shallow, the spacecraft might "skip" or "bounce" off the atmosphere and back into space. If the angle is too great, the heat shield (and possibly the spacecraft) might disintegrate. During the final phases of reentry, some spacecraft—especially capsule-type manned craft—deploy parachutes, resulting in a soft landing. The Apollo command modules employed this technique to make ocean splashdowns. 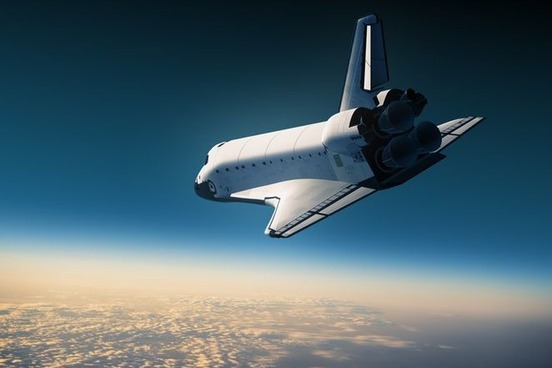 To American football fans, a touchdown equals 6 points made by carrying the ball across the opponent's goal line, completing a forward pass to a teammate across the goal line, or by recovering a loose ball in the opponent's end zone. Rugby fans know a touchdown to be a situation in which a player grounds the ball in his own in-goal, which means that the play is restarted with the defending team putting the ball in play with a dropkick. To astronauts, though, a successful touchdown doesn't amount to points but to a sigh of relief: it is moment when the spacecraft makes contact with the Earth after a flight.