The Disparity Between 'Desperate' and 'Disparate'

The word desperate has many meanings, but most have to do with having lost hope or wanting or needing something badly (‘He was desperate for money after being laid off.’). Disparate is used to talk about things that are markedly different in character or quality or that contain fundamentally different elements (‘The students come from disparate backgrounds.’).

The adjectives desperate and disparate sound similar and could easily be confused by someone who is unfamiliar with either word. (Or maybe someone with an overzealous autocorrect.) But fear not; we can help take away that anxiety. 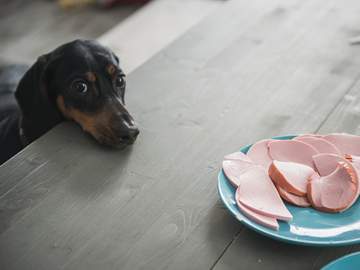 A desperate dog with disparate ideas from his owner

Of the two, desperate is more common and has a greater range of meaning. Desperate shares a root with despair, with both words deriving from the Latin verb sperare, meaning "to hope." It has many shades of meaning, but most pertain to the notion of having lost hope, or of wanting or needing something badly.

We all post stuff sometimes that will make us look good or that puts us in a positive light but y'all know there are some people that constantly post things that are really just a desperate cry for attention.
— Severo Avila, The Rome (Ga.) News-Tribune, 5 June 2018

How far will you go to buy a new graphics card? Edward Arciga was desperate enough to camp outside the Best Buy in West Los Angeles to try and secure one. —
Michael Kan, PC Magazine, 3 June 2021

The crew of a passing ship, the Panama-flagged MV Arpeggio, finally rescued Aldi — an open-water maneuver in which the castaway made a desperate leap to try to grab a rope thrown from a freighter.
— Bill Chappell, NPR.org, 24 Sept. 2018

The idiom desparate times call for desparate measures uses two senses of the word; it means that when are in a situation of dire need (as for money), you might be more likely to commit an extreme or dangerous action.

Disparate is about difference. Two things that are disparate are markedly different in quality or character, or are different in such a way that it is not apparent how they fit or work together:

People who grew up west of the Mississippi often have wildly disparate notions of what Florida is actually like. Some envision a posh, pastel-soaked paradise, others a tacky, sweaty dystopia.
— Pete Cottell, Willamette Week, 18 Sept. 2018

Thomas, who is Black, is an example of one of the main arguments made in the push to legalize recreational marijuana in Virginia. Democrats in the General Assembly frame this as a social equity issue, a necessary step to ending the disparate criminalization of people of color under the state’s current marijuana laws.
— Denise Lavoie, Associated Press, 14 Feb. 2021

La Cocina's ambitious, 7,000-square-foot food hall recently opened in the Tenderloin, but it can be overwhelming to think about what you want to eat. Everything just sounds so good. Its six vendors touch disparate corners of the Earth—Senegal, El Salvador, Algeria and others—with offerings like savory meat pies, peanut stew and po’boys.
— Soleil Ho, The San Francisco Chronicle, 21 May 2021

Disparate derives from the past participle of the Latin disparāre, meaning "to divide, separate off, make different." It is related to the noun disparity, a word often used to indicate how different types of people are treated differently, as in "racial/ethnic disparities" or "the disparity of incomes among neighborhoods."