They are among the most commonly confused words.

Their, there, and they're are all pronounced the same way. Their is the possessive pronoun, as in "their car is red"; there is used as an adjective, "he is always there for me," a noun, "get away from there," and, chiefly, an adverb, "stop right there"; they're is a contraction of "they are," as in "they're getting married."

Homophones — words that sound the same but have different meanings and spellings — can be tricky. There are three in particular that commonly confuse people. They're very tricky, in part because of their usefulness, which means that we call on them over and over in our writing here and there. 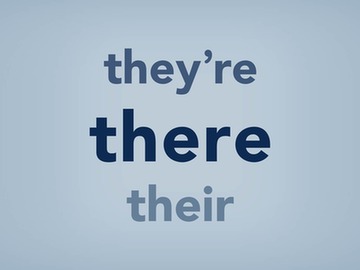 There's no need to confuse there, they're, and their. While they're not an easy group of words, with practice you can master their distinctions.

And we'll start there. That one has the word here in it, which is helpful. It can remind us that this particular there is often about location:

There it is.
Put it there.
Stay there.
We'll be there soon.

There you go.
There is where we disagree.
Friends who are always there for you.

There is a nice hotel in the town.

And it's the one used with the verb be at the beginning of sentences and questions:

There are plenty available.
Is there a hotel in the town?

The other two are trickier because they both have the idea of the plural in them. They key is discerning between the contraction for "they are" (they're) and the possessive of "belonging to them" (their).

They're is a contraction that means "they are." You can remember that apostrophes indicate the possessive only when used of 's, such as "the writer's thoughts." Otherwise, it's generally a contraction of two words, as in can't = cannot, or won't = will not, or an omission of a letter or letters, as in singin' for singing and 'em for them in stick it to 'em.

It's their house.
We're their neighbors.
The trees are losing their leaves.

Their also has a long history of being used as a singular pronoun. Associate Editor Emily Brewster explains its usage in this video.

In summary: There is the most common. It has the word here in it, which is helpful because it's often about location. They're always means "they are." Their is the possessive form of they.