Than is used in comparisons as a conjunction (as in "she is younger than I am") and as a preposition ("he is taller than me"). Then indicates time. It is used as an adverb ("I lived in Idaho then"), noun ("we'll have to wait until then"), and adjective ("the then-governor").

There's nothing more embarrassing then correcting someone's language only to realize that your correction contains its own error. Like maybe the one in our first sentence. Did you see it? That harmless little four-letter word then. It should have been than. 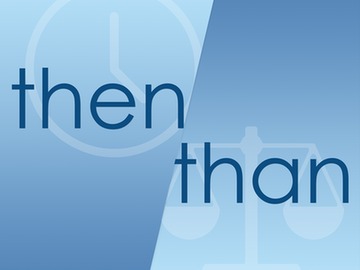 People get tripped up on then and than all the time—and why not? They look and sound so similar, and both words function as linguistic workhorses—then is most often an adverb, while than is usually a conjunction—which means that we mostly use them to connect more obviously significant nouns, verbs, and adjectives.

Keeping 'Then' and 'Than' Separate

Than is the word to choose in phrases like smaller than, smoother than, and further than. And it's the word that follows other, rather, less, and more.

Then—the option to choose when time is involved—fits in the phrases just then and back then, and after words like since and until. It's also in the phrases and then some, every now and then, and even then.

So when did this pair get so confusing? Turns out they've always been that way. Linguistically speaking, they're identical twins. In Middle English, they were the same word; both spellings were used for all the various meanings. It's been a few hundred years, however, since English has treated them as distinct, which means we have to too. We could go back to Middle English, but we think that would be harder then—um, that is, harder than—mastering these.