Can 'Creative' Be a Noun?

When adjectives drift into noun territory

Exercise is important. And by exercise we don’t only mean the sweaty kind that you periodically engage in so that you don’t feel like you’re wasting that money you pay to some gym every month. Exercising your peevery is important as well, and your complaining-about-language muscles need exercise just as much as your opening-that-jar-of-pickles muscles (or whatever it is you use those muscles for).

Functional shift (“the process by which a word or form comes to be used in another grammatical function”) is a thing that people often get exercised about, particularly when a verb becomes a noun (invite & impact). But sometimes adjectives become nouns (myriad & fun), and this is also something one could become upset about, if one wished to (many people do). However, much like rippling abdominal muscles, remaining angry at the natural shifts of language is not something that comes easily to most people; it has to be worked at. In order to maintain your proper level of spleen let’s take a look at another adjective that has slumped over into nounhood: creative. 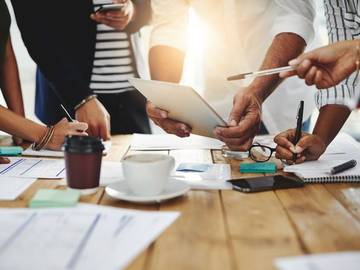 "Hmm, which word can we mess up next?"

At some point over the past decade, it became acceptable for adults to describe themselves, in a professional context, as creative. The word even sprouted a noun form. "I am a creative," a coder or juice-bar mogul might state, with an absence of doubt that would have embarrassed a Grammy-decorated songwriter in humbler times.
— Janan Ganesh, Financial Times (London, Eng.), 4 Nov. 2017

I try to stay current with what my parents would have called the "younger generation," and what I call colleagues, friends, nieces and nephews. Here's one for you to trot out and be irritated by. It seems that the adjective "creative" is now in use as a noun.
— Messenger Inquirer (Owensboro, KY), 31 Aug. 2016

I thought my irritation with marketing had peaked until I found out recently that "creative" is used as a noun for marketing campaigns. Ugh. Yes, I know that language evolves. But mutation is at the very heart of evolution and some mutations are not helpful or welcome.
— The Times Higher Education Supplement (London, Eng.), 24 Sept. 2015

The citations above share some qualities: all are from the past few years, none like the use of creative as a noun, and all (mistakenly, it turns out) think that this use is recent. While the adjective form of creative may be much older (early 16th century), the word has been used as a noun for almost 200 years.

It is to be lamented certainly that the three Armies of India do not form one great whole, but, while the distinctions do exist, the good policy of promoting harmony amongst them should dictate to the Government the avoidance of all such creatives of jealousy as this staff dispute has unavoidably proved.
— The Bombay Times and Journal of Commerce (Bombay, Ind.), 19 Jan. 1839

Yet the great Sydenham discovered of “Peccant humors,” “Coctions,” “Commotions,” and “Effervescences” which we now believe for the most part to have been mere creatives of a void imagination.
— The Western Lancet (San Francisco, CA), 1 Nov. 1872

The epoch of enthusiasm in colonization affairs is over and gone; the enormous immigration which of itself indicated this method of outlet has subsided, and we are free to contemplate the creatives of the past triad of years in the way of agricultural settlements by Jews.
— The American Hebrew (New York, NY), 10 Oct. 1884

Granted, these 19th century uses of creative as a noun are simply using the word as a synonym for creation, a meaning that has not remained in use. What of the use of creative to mean “a creative person”? We regret to inform you that this use is over a hundred years old, so you may not blame it on the millennials.

If creatives intellectual work is to prosper and increase in America it must be treated with recognition and respect….— The Times of India (Mumbai, Ind.), 6 Aug. 1912

But what about the ‘modern’ sense of creative … you know, the one that all the kids are using these days to refer to people involved in advertising campaigns and suchlike. The advertising sense is fairly new, having only been in use since the 1930s.

A dose of the anonymous Groucho is recommended to the college creatives who think of the advertising “game” as a promised land where one may deign to accept a great deal of money for having fun among the pencils and paint pots and typewriters.
— Hope Hale, The New York Herald Tribune, 30 Nov. 1930

Mr. Chevins said that too often “we creative men” are letting the research men create the advertising. “Too many of our so-called creatives are joining that unseemly and unsightly group in advertising, the pack of pin-striped pinheads who have never given birth to anything but the blues.”
— New York Herald Tribune, 26 Apr. 1959

Undoubtedly, many were cries from the creatives to the effect that, “if you had sold the campaign I prepared, we still would have had American.”
— The Irish Times (Dublin, Ir.), 13 Feb. 1969

We have entries for creative as both adjective and noun, with the noun defined as “one who is creative, especially one involved in the creation of advertisements,” and “creative activity or the material produced by it especially in advertising.” This noun use of the word may taste unwelcome, like a rancid licorice drop mixed in with a plate of strawberries, and you may continue to excitedly kvetch when other people use it, but it is neither recent nor unusual. When you are exercising your complaining-about-language muscles it is very important to remember that “new to me” and “new” may not always be the same thing.