We got a whole mess of fun here, folks

Funner and funnest have been in use as the comparative and superlative forms of the adjective fun for more than a century, though many people prefer to use more fun and most fun.

Some folk find it fun to use the word fun as an adjective. Others find it funner to inform this group that fun is properly a noun, not an adjective, and even if it is used in this way the comparative form of funner is an abomination. And sometimes the first group finds it funnest of all to tell the anti-fun brigade to go stick it in their hats. In the spirit of fun let’s have a look at both sides of this debate. 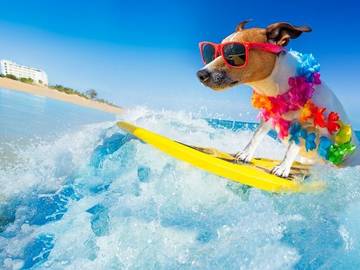 It's a wild ride.

Early Use of Fun as an Adjective

The earliest uses of fun were either slang or regionalisms, appearing at the end of the 17th century as a verb (“to cheat a person”) or a noun (“a case of cheating or deception”). The noun sense of “enjoyment” came up in the early 18th century, and for the next hundred years or so the word was blissfully free of adjectival impurities, and all was well with the world.

However, in the beginning of the 19th century things started to fall apart, as certain miscreants began using fun in ways that looked decidedly adjectival. While it is common to blame such linguistic excesses on speakers of American English, in this case it appears that it came about on both sides of the Atlantic at about the same time.

We have transmitted the communication to the proprietors, only reserving the following query:—“Was it fun, after promising to put the passengers on shore, from the Dublin seeam-packet (sic), to take them round the Floating Light.”
— Liverpool Mercury (Liverpool, Eng.), 16 Sept. 1825

This practice, continues the editor, may be fun to the officer—it may satiate a malignant heart; but it is what a Turk would be ashamed to do in his own country.
— American and Commercial Daily Advertiser (Baltimore, MD), 12 Apr. 1826

When eight o’clock struck, a pack of cards was accidentally observed over the mantle-piece and they were, half earnest, half fun, opened and tossed upon the table.
— The Observer (London, Eng.), 29 Oct. 1826

Few, if any, usage guides or commentators weighed in on the matter until the middle of the 20th century, possibly because the adjectival use of fun was limited, or was considered so uncouth as to not merit consideration. However, by 1960 the issue was being addressed, and the feeling was very much against allowing this particular form of functional shift.

Question: Can fun be used as an adjective, as in “We had a fun time?” G.J.
Answer: Not in my hearing without inducing severe nausea.
— Bergen Evans, The Austin Statesman (Austin, TX), 6 Oct. 1960

When I was in college I tried to get some standards for my life. I resolved never to be friends with those who used “fun” as an adjective.
— Judith Martin, The Austin Statesman (Austin, Tex.), 13 May 1971

Despite what the dictionary says, fun is not an adjective among articulate adults.
— Ronald Kohl, Machine Design (Cleveland, OH), 24 Jul. 1997

Emergence of Funner and Funnest

As is so often the case, however, common use rudely elbowed the naysayers out of the way, and fun is now defined as an adjective in every modern dictionary. It is still quite common to see usage notes appended to these entries, cautioning that adjectival fun is informal, and to be avoided in formal speech or writing. Once it became clear that fun was in fact an adjective people began to wonder about how to use the word in its comparative and superlative form. Can something be funner than something else? If you have reached the apogee of fun can you rightfully say that it was the funnest thing ever? Both forms have been in use for well over a hundred years, although neither one is found in what we might call elevated prose.

This new production is said to be of a bigger standard, both as to its literary and artistic merits. It is to be crowded with pictures of the funnest descriptions.
— The Boston Globe, 30 Oct. 1881

Harry Robinson, in his slight of hand burlesque is immense, and on the trapeze is the funnest act that was ever put on a programme, The audience couldn’t laugh, they screamed and howled with mirth.
— The Atchinson Daily Champion (Atchison, KS), 30 Sept. 1877

But what funnest of hall I never discovered it till I got ome wen I gott hin my house my wife urled the caucepan at my edd an wery nie nocked my branes out of my old carcuss….
— The Star (Saint Peter Port, Eng.), 13 Jul. 1876

A Rag Baby!—With—Mr. Frank Daniels, The Inimitable Comedian, in his Great Creation, Old Sport! Everything New and Funner Than Ever.
— (Advt.) Salt Lake Evening Democrat (Salt Lake City, UT), 3 May 1887

The comedy has been freshened up, but it is no funner than the first version.
— The Buffalo Commercial (Buffalo, NY), 9 Oct. 1894

Funner and Funnest are (Sometimes) Real

Our entry for adjectival fun states “sometimes funner; sometimes funnest.” This is because there are many people who do indeed use these words, and there are many others who, while they may allow that fun is an adjective, strongly prefer that things be ‘more fun,’ or ‘most fun.’

Comparative and superlative forms of English adjectives can be tricky things. There are some which prefer to be modified with -er or -est, some which work better with more or most, and still others (such as good and bad) which take entirely different words. It is not difficult to find exceptions to any rule regarding these words. For instance, bad usually becomes worse and worst, although there are hundreds of uses of badder and baddest ranging across a wide variety of eras and registers.

And euen so, the baddest people may,
became good folke, if they will bide the stampe.
— Thomas Churchyard, A Sparke of Friendship, 1588

The fact that funner and funnest exist does not mean that you should use them without expecting that it will strike some people as peculiar. If you write them in a term paper expect to receive disappointed sighs and underlined corrections in equal measure from your teacher. But words which disappoint people are still words - if they truly didn’t exist there would be nothing to be disappointed about.