1a : the state produced by the establishment of one or more pathogenic agents (such as a bacteria, protozoans, or viruses) in or on the body of a suitable host an infection in his foot
b : a disease resulting from infection contagious infections infections of childhood
2 : an act or process of infecting something or someone also : the establishment of a pathogen in its host after invasion
3 : an infectious agent or material contaminated with an infectious agent … that notion that the infection was all in the air, that there was no such thing as contagion from the sick people to the sound …— Daniel Defoe It may not be uninteresting to add, that this case I vaccinated with infection taken from a secondary pock on the arm of her sister …— John Redman Coxe
4 : the communication of emotions or qualities through example or contact But immediately she resisted this intolerable fear as an infection from her husband's way of thinking.— George Eliot also : the emotion or quality that is communicated … as the evening wore on, she caught the infection of their excitement … — Thomas Hardy Besides, I know what sort of a mind I have placed in communication with my own: I know it is one not liable to take infection … — Charlotte Brontë
5 : the act or result of corrupting someone's morals, character, etc. … it is at least as difficult to stay a moral infection as a physical one …— Charles Dickens … they could not know the origin—or the depth—of his susceptibility to the infection of power.— Robert A. Caro
More Example Sentences Phrases Containing infection Learn More About infection

Examples of infection in a Sentence

These example sentences are selected automatically from various online news sources to reflect current usage of the word 'infection.' Views expressed in the examples do not represent the opinion of Merriam-Webster or its editors. Send us feedback.

First Known Use of infection

History and Etymology for infection

Our Reviews team has selected the best thermometers.

The first known use of infection was in the 14th century 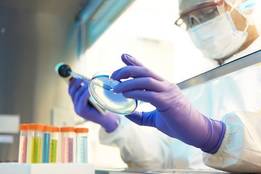 1 : the act or process of passing on or introducing a germ, illness, or disease to : the state of being infected
2 : any disease caused by germs an ear infection

1a : the state produced by the establishment of one or more pathogenic agents or microorganisms (as bacteria, viruses, protozoans, or fungi) in or on the body of a suitable host treated a bacterial infection of the eye
b : a disease resulting from infection : infectious disease common infections of childhood contagious infections
2 : an act or process of infecting something or someone syphilis infection is chiefly venereal also : the establishment of a pathogen in its host after invasion
3 : an infectious agent or material contaminated with an infectious agent

More from Merriam-Webster on infection

Thesaurus: All synonyms and antonyms for infection