1
a
: to play a game for money or property
b
: to bet on an uncertain outcome
2
: to stake something on a contingency (see contingency sense 1) : take a chance

1
a
: an act having an element of risk
b
: something chancy
2
: the playing of a game of chance for stakes

Verb He's been drinking and gambling heavily. He would often gamble hundreds of dollars on a hand of poker. The mayor is gambling with the city's future. people who lost money gambling in the stock market The mayor is gambling that the new policies will help rather than hurt the city. Noun Starting her own business was a gamble, but it paid off. She thought about starting her own business, but she decided it was too much of a gamble. See More
Recent Examples on the Web
Verb
Musk is apparently willing to gamble on moving away from this and into a vague new direction, despite the company struggling to meaningfully expand its existing non-automotive business line.

Dana Hull, BostonGlobe.com, 5 Oct. 2022 Bearing political scars from a year of fractious talks, few Democrats on Friday seemed willing to gamble that there was a larger deal to be had in September.

Jamie Stolz And Michael Loftus, CBS News, 16 Sep. 2022 The Celtics could gamble that Tatum, 24, and Brown, 25, blossom enough as ball-handlers to provide the requisite playmaking upgrade with Smart aboard.

Globe Staff, BostonGlobe.com, 21 June 2022 Yet the real battle for Amazon could be convincing everyone that its very expensive – and mostly underwhelming – gamble on J.R.R. Tolkien’s Middle-earth saga has been a rousing success.

Ryan Randazzo, The Arizona Republic, 8 Oct. 2022 Leaning on the new length and speed in the backcourt — with transfers Rudi Williams and Jaxson Robinson — BYU wants to gamble and get out in transition.

Kevin Reynolds, The Salt Lake Tribune, 6 Oct. 2022 Because the brain is still not fully developed by 21, Arkansans under that age are not able to legally smoke, drink alcohol, or gamble, Nicks said.

Grant Lancaster, Arkansas Online, 18 Sep. 2022
Noun
Those 13 days in October 1962 demonstrate that every crisis among nuclear armed states is a gamble.

Jon Wolfsthal, The New Republic, 11 Oct. 2022 Even daring to launch in Portland was a gamble, with the major ad agencies based in New York, Chicago or Los Angeles.

Phil Davison, Washington Post, 7 Oct. 2022 Even daring to launch in Portland was a gamble, with the major ad agencies based in New York, Chicago or Los Angeles.

Phil Davison, BostonGlobe.com, 7 Oct. 2022 Attempting to make the move to any new sales channel too soon can be a gamble, with additional costs that may never be recovered.

Tejas Dave, Forbes, 3 Oct. 2022 Jumping on a 19-year-old with zero college experience was certainly a gamble.

oregonlive, 27 Sep. 2022 The idea that a dynamic playmaker could unlock the potential of a young quarterback whose game appeared to have limitations was a gamble.

Rob Reed, Forbes, 3 Oct. 2022 Studios took the gamble on more leads of color because of the work that Will Smith, Denzel [Washington] were doing in the beginning, right?

These example sentences are selected automatically from various online news sources to reflect current usage of the word 'gamble.' Views expressed in the examples do not represent the opinion of Merriam-Webster or its editors. Send us feedback.

probably back-formation from gambler, perhaps alteration (by dissimilation, or substitution of the frequentative suffix -le) of early Modern English gamner "player in a game," from gamen "to play" (going back to Middle English gamenen, going back to Old English gamenian, derivative of gamen game entry 1) + -er -er entry 2

1757, in the meaning defined at intransitive sense 1a 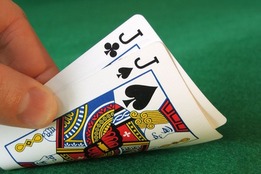 1
a
: to play a game for money or property
b
: to bet on an uncertain outcome
2
: to bet something on the chance of gain : take a chance
we gambled on not being seen
3
: risk entry 2 sense 1, hazard
gambler
-blər

1
: a risky undertaking
2
: a betting on a game of chance

: to risk something of value for the chance of winning a prize

: to risk (something) for the chance of winning a prize
gambler
-blər

More from Merriam-Webster on gamble