The (Not Always) Cheery History of 'Cheer'

Did you know that you can look at a person's cheer?

The word cheer is usually associated with happiness, enthusiasm, and encouragement, whether it is carolers spreading holiday cheer; a boisterous "Cheers!" at happy hour; fans cheering on their team; or people on the sidelines cheering on marathon runners. It can also bring to mind uplifting images like a child cheering up their hurt friend with a hug and kind words, or a dog cheering up its hangdog owner with a snuggle. But cheer hasn't always been used so cheerily. Originally, a cheer was something seen, not heard, and sometimes the sight was one of sadness. 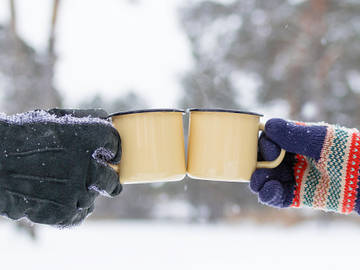 Cheer is a loanword from Anglo-French, which itself is derived from Medieval Latin cara and probably Greek kara. All three source words mean "face," and English cheer—commonly found in the form chere in early medieval writings—shares that meaning. Cheer then came to refer to a person's facial expression as well as to a person's state of mind, heart, or spirit that is manifest in his or her visage. And as alluded to, a person's cheer ran the emotional gamut from happiness to sadness, depending on the modifier it followed or the context surrounding it.

That, though by kind she stout and salvage were, / For being born an ancient Lion's heir, / And of the race that all wild beasts do fear, / Yet I her framed and won so to my bent, / That she became so meek and mild of cheer….
— Edmund Spenser, Daphnaida, 1591-92

He ended, and his words their drooping cheer / Englighten'd, and their languished hope reviv'd.
— John Milton, Paradise Lost, 1667

Implored for aid each well-known face, / And strove to seek the Dame's embrace. / A moment changed that Ladye's cheer, / Gushed to her eye the unbidden tear.
— Sir Walter Scott, The Lay of the Last Minstrel, 1805

By the late 1300s, people began associating the word more often with a state or feeling of happiness and merriment than sadness and despondency. Common examples of such use are "faces full of cheer" or "spreading a little holiday cheer."

In short time, cheer came to refer to merry hospitality or entertainment and, by extension, to the food and drink offered at festive occasions. The proverbial saying "The more the merrier, the fewer the better cheer" is based on the latter sense.

We return'd to London, having been treated with all sorts of cheer and noble freedom by that most religious and virtuous lady.
— John Evelyn, Diary, 22 Oct. 1685

Christmas had been, from time immemorial, the season of joy and domestic affection, the season when families assembled, when children came home from school, when quarrels were made up, when carols were heard in every street, when every house was decorated with evergreens, and every table was loaded with good cheer.
— T. B. Macaulay, The History of England, 1848

During the first half of the 16th century, cheer began to be generally applied to anything that gladdens or that brings joy (like bountiful food and drink does), as in "words of cheer" or "a cup full of cheer."

The development of the familiar use of the noun cheer for a shout of praise or encouragement is linked to the verb, as well is the interjection cheers. With that said, a short history on the verb cheer is in order.

The verb cheer originates in the 14th century with the meaning "to give new hope to and to lift from discouragement, dejection, or sadness to a more happy state"—in short, "to comfort." Cheer then begins being used in senses such as "to make glad or happy" and "to be or become glad or happy," which are usually followed by up, as in "The ice cream cheered the child up" or "Cheer up—things will get better."

And while the bubbling and loud-hissing urn / Throws up a steamy column, and the cups / That cheer but not inebriate, wait on each, / So let us welcome peaceful evening in.
— William Cowper, "The Winter Evening," 1785

… cheer desponding men with new-born hope.
— William Wordsworth, "Ah! Where is Palafox? Nor Tongue Nor Pen," 1810

It was during the 15th century that cheer starts being used in the sense "to urge on or encourage into action especially by shouts," as in "The general cheered his troops to victory." Sailors picked up this sense of the verb about mid-17th century and applied it to the saluting of a ship with a shout—and the related noun form soon followed.

After we had fired, we gave them a Chear, as the Seamen call it; that is to say, we halloo'd at them by way of Triumph, and so carried off their Ambassador.
— Daniel Defoe, Captain Singleton, 1720

By the 19th century, the verb, as well as the noun, caught on with landlubbers, who began applying it specifically for shouting or applauding in support, praise, or triumph, as in "The audience cheered the graduating class"; "Three cheers for our goaltender."

Cheers is also an interjection—a spoken word, phrase, or sound that expresses feeling—and derives from the vocal senses of cheer. The earliest print evidence of cheers traces to the early 20th century; however, being an interjection, it was likely used prior. In British English, it is commonly used as an informal way to say "thank you" or "goodbye":

Cheers. Very nice of you to invite me.

I'll see you next week. Cheers.

It is also used, in both British and American English, after a toast has been made to show approval for what has been said. Glasses and bottles come together as "Cheers!" is shouted by the participants. A sip, swig, or chug follows … and perhaps another toast is made and another "Cheers!" is vocalized.

After a few rounds, you might share how cheer meant "face" in medieval times and how cheer as a word for shouting in support, praise, or triumph came from 17th-century sailors saluting ships. Your friends will probably Google it, but you'll be right. Cheers.